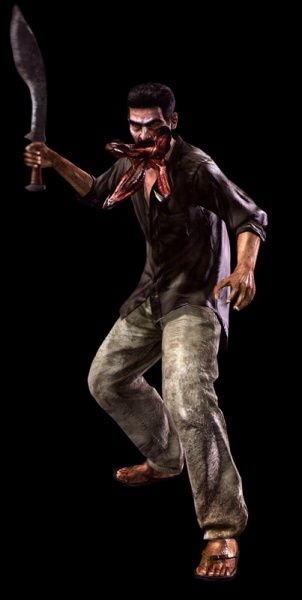 Majini are humans under the influence of the modified Type 2 and Type 3 Las Plagas parasite. Like their Ganado predecessors, they are under complete control by the parasites and as such will act under the orders of a specific human. They have lost their personality and ability to reason, but maintain their human intelligence, allowing them to communicate basic ideas through speech, wield tools and weapons, and employ group tactics.

Type 2 infected humans become ‘Majini’ in just a matter of seconds, allowing the improved Plagas to fetch a higher price on the B.O.W. market. Unlike the Ganados created by the original Las Plagas parasite, Majini had the ability to expose their parasites in daylight.

TOWN/STANDARD MAJINI – These are the people living in and around the Kijuju Autonomous Zone and were deliberately infected as a test case in the study of a Majini’s practical usage as a B.O.W. They were very aggressive and liked to gather in large groups. As common with Plaga infectants, their day to day living soon decreased, personal hygiene standards fell and their behaviour became stranger. They would mutilate and display local animals, eat raw food and partake in strange rituals. They used everyday items for weapons such as tools, sticks with some possessing axes, kukris and crossbows. They took an instant dislike to strangers and any discovered in their midst were either brutally murdered or publically executed. Some have also been documented driving vehicles and motorcycles, demonstrating impressive co-ordination and throwing motalov cocktails whilst in pursuit of their targets. The Majini who wear red shirts take a leadership role among them and have a higher endurance rate than usual.

EXECUTIONER MAJINI: – This incredibly powerful Majini is the result of the implantation of the Type 2 Plaga parasite into individuals with a superior physique. Implantation increases the individual’s original strength and endurance several-fold, allowing them to wield an enormous axe-like weapon made by chaining a guillotine blade to a pole. The axe is brought down on anyone foolish enough to refuse Plaga implantation themselves.

Its entire body is massively fat and wrapped in thick layers of muscle strengthened with a chemical substance secreted by the parasite, meaning it can continue to fight even if shot repeatedly with bullets. 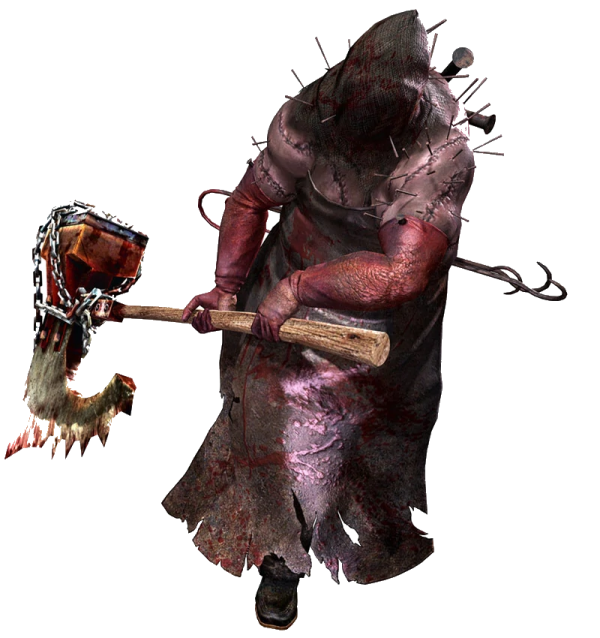 BIG MAN MAJINI: – The “Big Man Majini” is not the same kind of giant as the “Executioner”, but it is stronger and bigger than the normal natives and very tough to kill. However, when the Plaga parasite is injected into this kind of host superior in body strength, it shows inadaptability especially on their brain functions.

Compared to the normal Majini, it has almost no verbal communication so the exchange of intentions is impossible for it. Although it has high resilience, its intelligence makes it of onlylittle application value as a bio organic weapon in cases where organisational behaviour is necessary. They are useful only as cannon fodder, built like wrestlers and using their overwhelming strength to crush their targets to death. CHAINSAW MAJINI: – These tall Majini conceal their faces with cloth bags, speak very few words and tend to be lanky in stature. They are extremely resilient and the threat they pose is increased exponentially by the chainsaw that they wield. No target, no matter how strong, can survive a hit from these deadly warriors. Its increased strength and resilience is a direct result of the host human being a highly adaptive host to the Plaga parasite. This Majini has a strong desire to kill any uninfected humans and will cut them into pieces mercilessly. The scars on its hands are caused by the constantly shaking chainsaw. In some sense, these scars tell a story about the countless number of this creature’s unlucky victims. 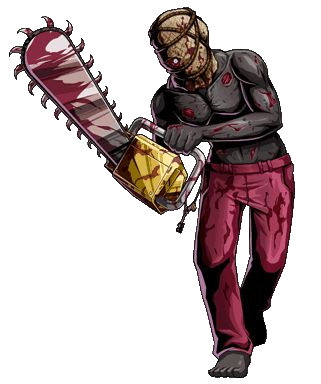 WETLANDS & GIANT MAJINI: – Wetland Majini are unfortunate humans are the native inhabitants of the wetlands surrounding Kijuju and were originally proud descendants of an ancient, highly-civilised culture. They were infected with the Type 3 Plaga which enacted changes in their DNA. This caused a reduction in brain patterns that caused them to regress to primitive ways similar to that of their forbearers. They discarded their clothing and covered themselves in war paint before taking up the weapons of their ancestors. They are highly-capable combatants with incredible jumping power and endurance. Because Type 3 grows from an egg inside the body just like the original strain found in South Europe, this new Plaga variant is not compatible with females.

Giant Majini are members of the Ndipaya tribe whose height grew to around three meters due to an unexpected side effect of experimental Type 3 Plaga implantation. They are able to summon their companions with a war cry and wield crude handmade clubs fashioned from skulls and spikes. Both their offensive and defensive abilities are far superior to those of regular Wetland Majini. In the same way that certain creatures and individuals display exceptional compatibility with viruses, Giant Majini display exceptional compatibility with Plagas. The main sign of high compatibility with the Type 3 Plaga is gigantism, although this only manifests itself in mature individuals possessing both X and Y chromosomes (i.e., adult males). Although this effect is thought to be mostly due to the influence of the original dominant-strain Plaga, the number of test subjects is exceedingly small and the details are still unclear. 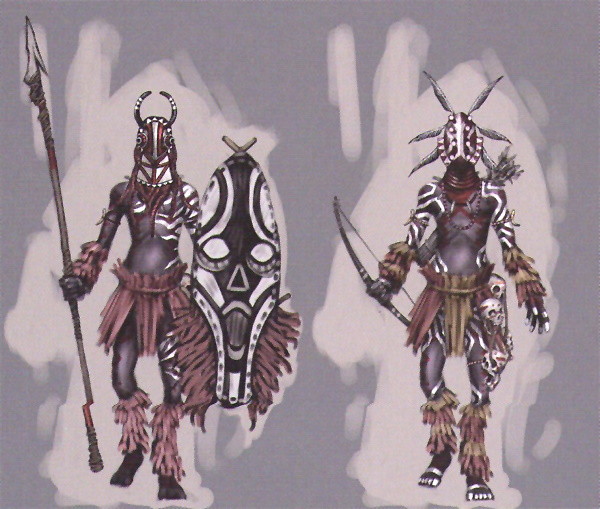 BASE & GATLING GUN MAJINI: – Base Majini are highly-skilled Majini have been organised into elite squadrons and their main duty is to guard and protect Tricell facilities. They have been given training that far surpasses normal Majini, and can skilfully wield handguns and grenades, in addition to heavier firepower like stun rods and rocket launchers. They can supplement their already high resilience with armour and shields, making them tough enemies to beat from any angle. They are capable of tactical thinking and will quickly close in on their targets.

Gatling Gun Majini are among the elite Majini superior at using guns and explosives deployed in Tricell’s research facility, this large soldier acts as captain. It is based on elite soldiers with great combat skills and because the modified parasite enhanced its strength, it can use Gatling guns originally equipped on vehicles. Its habits still remain after being infected by the parasite, so it always shows itself with cigars. It still wears a gold necklace, a gold vest, and possesses gold teeth, suggesting he lived an extravagant lifestyle before becoming a host of the Plaga. 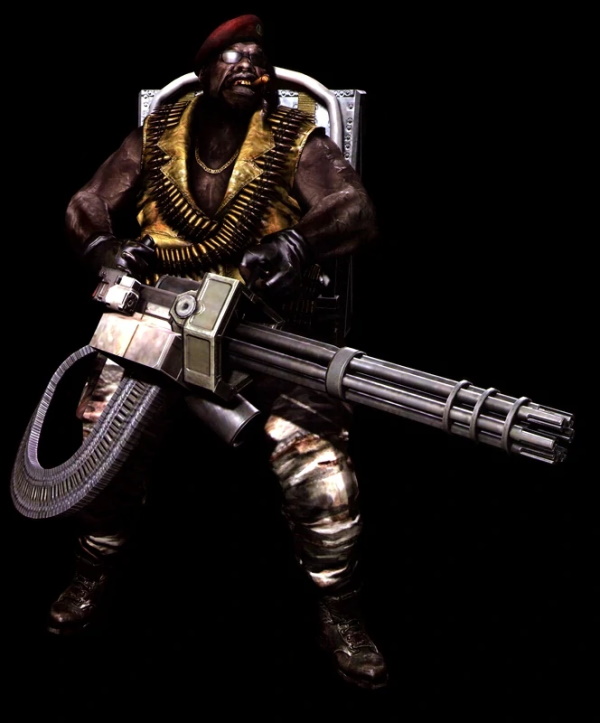 MUTATED MAJINI: – This creature is a human Majini with an exposed Plaga parasite mutating into an adult variant known as ‘Plaga C’ or more commonly with the Type 2 parasites as ‘Bui Kichwa’. This is a Swahili word for ‘big spider’. It has a fleshy body with a mouth containing four razor sharp teeth. Protruding outwards are six legs all covered in spines and ending in a sharp, black talon.

The original Plaga parasite documented in Southern Europe in 2004 was able to generate a mutation that could live for a short period independently of its host. The Bui Kichwa was the result of improving this mutation and once detached from its host, the organism could live independently for much longer and burrow itself underground and lay dormant. In the case of the Mutated Majini, the parasite has grown in a human body, but the Bui Kichwa mutation has not quite reached maturity and has yet to detach from its Majini host. Because of this, the human part is rapidly losing control and will just run around relentlessly. The parasite is extremely aggressive, and it will target anything that moves indiscriminately.

Tests also show that the Zombie Jammer is ineffective against it. They are difficult to kill but are in the latter stages of their lifecycle. When ready, the Bui Kichwa will detach and become an independent organism. The remains of the human host is discarded completely. 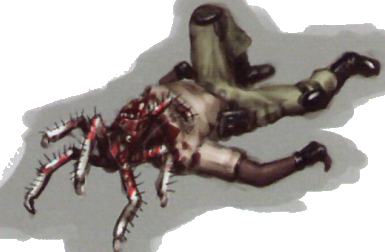