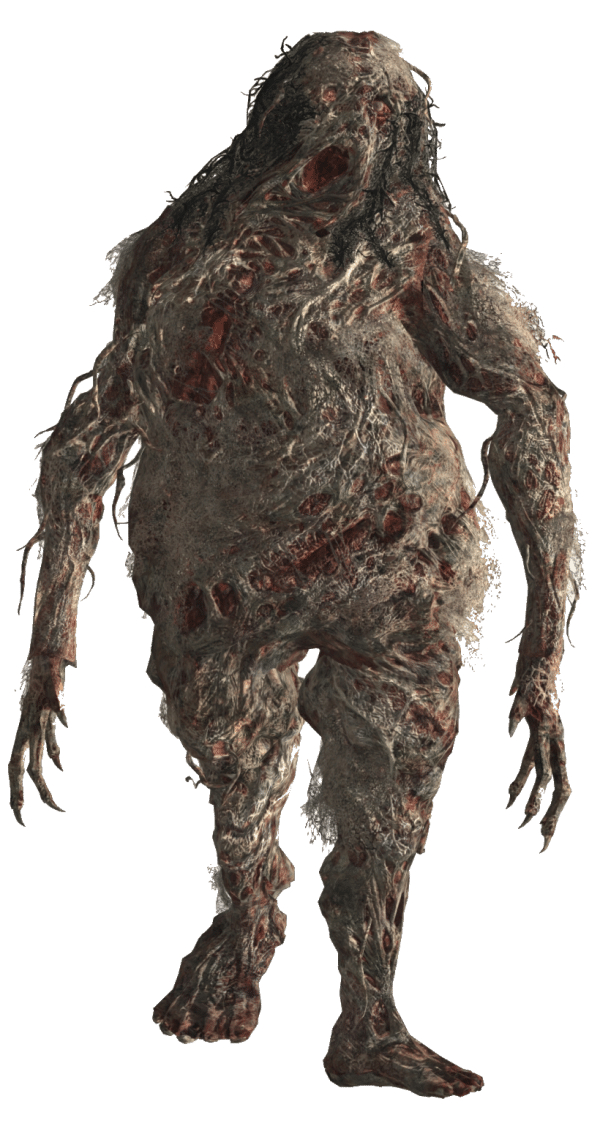 This is a large variant of a Molded creature using the White Mold and a large human female as the base organism. Its development code was WM-01 and it represents an early attempt by The Connections to create a viable standalone B.O.W. using this new artificial Mold variant. The creature remains humanoid in shape and traces of the original host’s body tissue and organs can be seem behind the web-like strands of White Mold that form a protective shield around the creature.

Its appearance is similar to that of a Fat Molded but the advanced White Mold has stretched the host, making it significantly taller and wider than the original variants and boasting increased muscle mass. Its enlarged head has two visible ocular cavities and its original left eye can still be made out underneath. It has no discernible nose and a large hole where the mouth should be. A large cranium is visible at the back of the head with a small tear where the flesh has burst thanks to its enlarged skull. When the creature takes damage, this rip expands and become bigger, before opening completely to expose what is left of the brain.

Like regular Molded, the Mama Molded has elongated arms and hands with four extended fingers on each. The White Mold covers its body providing the creature with extraordinary defensive capabilities and some of the Mold has hardened into branch-like sharpened talons for extra defence. It is completely resistant to conventional firearms and only specially created RAMROD ammunition will weaken it.

Despite its large bulk, the creature is also surprisingly fast and will run and charge at its victims. Unlike regular Fat Molded, the Mama Molded does not spew acidic bile at its victims, but it is still capable of expelling it from the numerous pores across its body. Likewise shooting at a Mama will result in the creature secreting more of the White Mold spore from its body. But the most curious aspect of a Mama Mold is its ability to produce small offspring. Although the White Mold covers a majority of its body, there are gaps which expose body tissue, and this tissue will swell into tumours as a small embryo grows within, eventually bursting completely when the infant organism inside has matured enough to escape. These small creatures are known as ‘Little Crawlers’ and will swarm around to protect their mother. When inert the Mama Mold will hibernate in the floor but quickly reforms when it senses prey nearby.

Early experiments have indicated the Mama Molded to have tremendous potential in the battlefield, both as a weapon and a vector to spread the white mold spore. As a final defensive measure, the creature will self-destruct upon death, dealing further damage to its aggressor and leaving no body behind. The Connections researchers based at the labs inside Abercrombie Salt Mines only created one experimental subject, and it was set loose by Lucas Baker when he learned operatives from Blue Umbrella had arrived at the Baker plantation to capture him and seize Eveline.