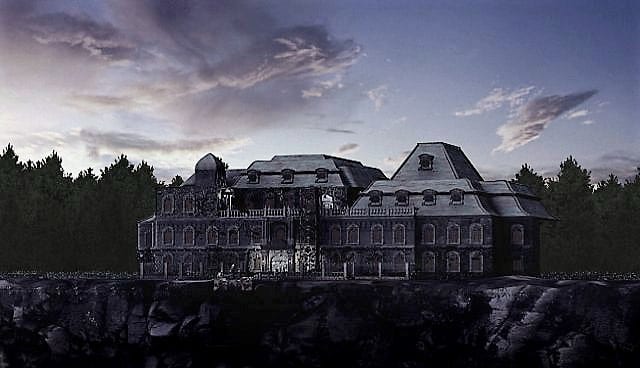 Umbrella’s executive training school was completed in August 1968, five months after the official establishment of the company and Oswell Spencer placed James Marcus as the first Managing Director. Marcus originally had no interest in the post but soon realised that with the lab facilities it provided, he would be able to carry out his own personal research on the Progenitor Virus in complete privacy, away from the all-seeing eyes of Spencer.

The training facility took on its first students in September 1968 with the ultimate goal of discovering and educating a select group of individuals trained for executive positions within the company. The staff employed there were to embark on a quest to discover the future global leaders of Umbrella in the years to come.

The facility was operational for only ten years until it was closed down unceremoniously in 1978 following revelations of Director Marcus’s illegal human experimentation for his t-virus research. In that time the facility only produced two students with any potential; William Birkin and Albert Wesker. Management of the students was left mainly to the Assistant Director as Marcus spent most of his time locked away in his private labs outside the public sector of the school. He never showed interest in any of the students until he read the progress reports on Wesker and Birkin shortly after their enrolment in 1977. Following closure of the facility, the actual school was left abandoned; though James Marcus still operated in his labs underneath the church. There he continued his research but having been stripped of all authority, resources and funding, he could never produce any worthwhile results. Despite the main facility remaining empty, the storage tanks were still full and due to plain miss-management there were still many exposed chemicals lying around. The place gathered dust for twenty years until Umbrella launched an operation to re-open it in 1998.

Situated in Raccoon Forest several miles away from the Arklay Labs, the training facility was similar in size to the mansion, perhaps a little bigger but not as meticulously designed having not been constructed by George Trevor or any of his representatives. It was built on a large hill and over time the main bridge collapsed, leaving a gaping chasm in its wake. At the rear of the facility was the wide expanse of a huge lake surrounded on all sides by a thick blanket of forest. The front of the building was situated on the edge of a large cliff.

There was a purpose-built garage underneath the main building containing private rail tracks for the Ecliptic Express leading back to Raccoon City. There was also a small sewer network running parallel to the foundations of the building. The main hall was dominated by a large portrait of James Marcus at the top of the main staircase and a speaker system played his voice every so often, reminding the students of the training facility pledge and why they were there. The school’s guideline was ‘Obedience breed discipline, discipline breeds unity. Unity breeds power. Power if life.’ The ground floor left wing contained toilet facilities and a small classroom with a projector screen. The right wing housed the main student dining room and kitchen. A corridor beyond led to the generator room with a staircase down to the basement level. On the opposite side a single door led to a storage room for old relics with a ladder leading upwards to an exterior balcony where access to the observatory could be gained.

On the second floor, the left wing had a single living room area, a library with computer access, another study room, and an infirmary. There was also Marcus’s office which was designed around his love of chess. The right wing second floor contained a meeting room where regular meetings of the Vaccine Research and Infectious Agents teams were held. Other rooms included a bar and recreational area complete with piano and wine cellar. There was also a couple of workshops and an audio-visual room.

The third floor contained a large empty space with no obvious function yet was home to a couple of animal pits. A bell tower and an outside courtyard area with a small water feature was also present on an exterior terrace. Many doors in the main building could be locked and unlocked using the respective Fire and Water motif keys. In the main hall, a switch revealed a hidden door behind the portrait of Marcus. This led down to the basement area where a hidden torture room was located as well as the power regulator room. Access to the basement was also found via the generator room and contained a small prison and steps down to a further sub-basement holding an armoury and a ‘battle zone’ testing grid used for the first primitive B.O.W.s created by Marcus. The observatory on the third floor could be accessed via a hidden switch in Marcus’s office. Beyond the observatory a small path across the lake led to a church. An elevator on the left side led down to Marcus’s private labs and an underground cable car system that led back to Raccoon City. The labs were on the upper floor above an old library stacked to the brim with various scientific and biological journals. The main laboratory housed a gas chamber and adjacent rooms contained large cages for animal specimens. To get to the training facility from the city, employees would take the Ecliptic Express; which was a special Orient Express-style train built at the same time as the training school.

The Management Training Facility was destroyed following activation of its self-destruct system on July 24th 1998. A biohazard had been confirmed on the site and contact had been lost with two investigation teams.