Manuela was born in 1986 to Javier and Hilda Hidalgo. She lived in relative happiness and was idolized by her parents. She was unaware of her father’s vast criminal empire but the riches he earned ensured she received a privileged upbringing and a good education. But Manuela’s happy existence was shaken at a very young age when in 1991 her mother developed a rare form of terminal cancer. In desperation, Javier signed a contract with Umbrella to acquire a specialised strain of the t-Virus to use as a form of medical treatment. Although initially successful, repeated injections of the virus mutated her into a horrific monster. Hilda was sealed away in secret and Manuela was told that she had died. 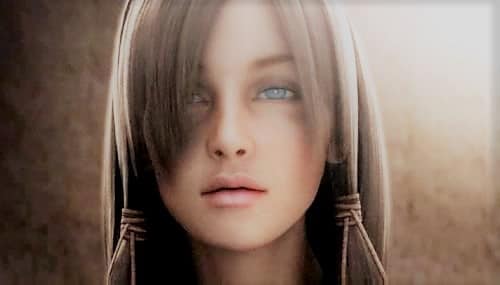 Manuela was brought up wanting for nothing, smothered in her father’s generous affection. She attended school in the local waterside village of Mixcoatl. Her mother’s death left her with a very fragile personality but she was good-natured and had a gentle heart, the polar opposite of her father. She often liked to sing and remembered a lullaby her mother used to sing to her when she was young. This song was special to her and it reminded her of happier times.

She remained oblivious to Javier’s life as a major crime lord and lived a relatively normal life until 2001 when she was diagnosed with the same rare form of cancer that had claimed the life of her mother. Javier was distraught at this news and the prognosis from his private team of doctors was not good. All they could deduce was that the illness appeared native to Amparo so Javier once again turned to Umbrella for help. But this time he was contacted by Albert Wesker after Wesker had learned of his vast criminal empire having turned his attentions to South America following the turn of the millennium. Javier purchased a t-Veronica sample from Wesker who posed as a virus trafficker and planned to use it on his daughter. Javier believed that he could prevent any mutation by constantly transplanting Manuela’s organs and so his crime syndicate, the Sacred Snakes, began to traffic organs on the black market and kidnap local girls for harvest. Manuela was taken out of school and her treatment began. Her schoolmates sent her a get-well soon card in which they wrote they hoped she would be back at school the following spring.

By 2002 the treatment appeared to be working, but local newscasters were constantly reporting an increase in disappearances of young girls from the surrounding region. This was because the Sacred Snakes were kidnapping them and harvesting their organs. Manuela eventually learned of this when she convinced her private team of doctors to tell her the truth behind her treatment. Horrified that so many innocent girls had died so that she could live, she fled the mansion and hid in the jungle for three nights and three days before arriving back at Mixcoatl. She was helped by the Guide who would later speak with Krauser and Leon. But when the t-Virus was unleashed upon the village by Javier, the Guide mistakenly believed Manuela was the cause of all the chaos.

Manuela was eventually found by Leon and Krauser and agreed to take them back to Amparo and to Javier’s mansion. Along the way, she admitted to Leon that she was infected with the t-Veronica virus. Despite her father’s pleas to return to him, she could not forgive Javier for the evil he had done and so sided with Leon and Krauser when the final battle came into play. Using her flammable blood, which was a side effect of the virus, she was able to assist Leon and Krauser in defeating Javier.

Following the incident, Manuela was placed into protective custody with the U.S. Government. She continued to undergo regular organ transplants and samples of her blood were passed onto Carla Radames through unofficial channels so it could be used in the ongoing C-Virus development.