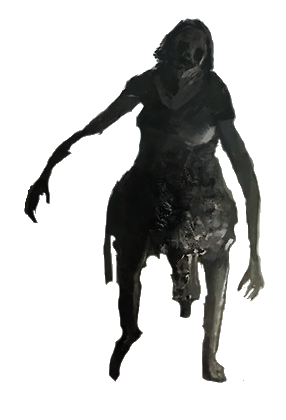 Marguerite Baker was infected by the bio-weapon Eveline following her escape in Dulvey, Louisiana. Like her other family members, infection was initially fixed by Eveline between Stages 1 and 2.

Margeuritte was infected following the rescue of Mia Winters and Eveline from the LNG Annabelle freighter crash in the bayou. Unaware that Eveline was a bio-weapon, infection was quick and saw insects spew from her mouth. She went to see her local doctor, Crawford Lang, who gave her an x-ray. The results showed dark patches in her cranium that were identified as fungus deposits related to an unspecified mold. Lang was extremely concerned and wrote to Marguerite asking her to attend Dulvey General Hospital as a matter of urgency to undergo further tests. But Marguerite ignored the letter as her infection progressed from stage 1 to stage 2 and she became completely under Eveline’s control. Normally the infection if left unchecked would progress to the third and final stage whereupon every cell in Marguerite’s body would be taken over by the bacterium and she would mutate and lose her human form entirely, however because Eveline saw Marguerite as her new mom, she restricted her infection level to stage 2 at all times.

Now completely subservient, Marguerite complied with Eveline’s every wish and she was given responsibility of hiding a deceased D-Series subject recovered from the ship. Marguerite viewed the item as a gift and hid the corpse inside the detention room on the second floor of the old house. Marguerite viewed it as a sign of Eveline’s trust in her and that it would lead them all to happiness. She vowed to kill anyone who would corrupt that happiness. Like Jack, the infection bestowed Marguerite with regenerative abilities, but additionally she was also granted the power to control mutant insects that hatched from the bacterium Eveline was able to produce. She also developed a bizarre mutation in her lower abdomen which became something akin to an insect hive. She could ‘birth’ even more of these insects and control them at will.

Marguerite would encounter Ethan Winters when he was lured to the Baker Estate. She would use a lantern to try and locate him. She later confronted Ethan when he tried to access her altar and when he caused her enough damage, Marguerite underwent a mutation and developed enlarged limbs. By now Eveline had discarded her as her ‘mom’ and reverted back to favouring Mia, meaning Marguerite’s infection was no longer restricted and was rapidly increasing to stage 3. The mutated Marguerite confronted Ethan for a final battle in the greenhouse where she used her bugs to attack him, but Ethan’s acquired firearms were enough to knock her down for good. Her regenerative powers lost, Marguerite slowly calcified and died before crumbling away into dust.