Marguerite Baker lived on the outskirts of Dulvey, Louisiana on a large plantation surrounded by swamplands. She was the wife of Jack who she had been married to for at least 25 years prior to 2014. They had two children together named Lucas and Zoe.

Marguerite was a kind and pleasant woman, always willing to see the best in people and she regularly helped out in the local parishes. She was a stay at home housewife and liked nothing more than cooking and cleaning and being at the beck and call of Jack and the rest of their family. She had a keen interest in gardening and would spend a lot of time inside the old greenhouse near the barn. She was also an excellent cook. Overall the Bakers lived a quiet and uneventful life, breeding cattle and farming their plantation. They had a quiet reputation amongst the surrounding community. 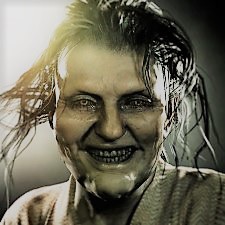 Marguerite Baker lived on the outskirts of Dulvey, Louisiana on a large plantation surrounded by swamplands. She was the wife of Jack who she had been married to for at least 25 years prior to 2014. They had two children together named Lucas and Zoe. Marguerite was a kind and pleasant woman, always willing to see the best in people and she regularly helped out in the local parishes. She was a stay at home housewife and liked nothing more than cooking and cleaning and being at the beck and call of Jack and the rest of their family. She had a keen interest in gardening and would spend a lot of time inside the old greenhouse near the barn. She was also an excellent cook. Overall the Bakers lived a quiet and uneventful life, breeding cattle and farming their plantation. They had a quiet reputation amongst the surrounding community.

In October 2014, Marguerite’s life was changed for good when a hurricane hit the area and left the plantation badly damaged and partly flooded. The severe storm had caused a large tanker, the LNG Annabelle, to stray off course in the Gulf and be washed up in the bayou. Marguerite had attended to go into town to purchase some groceries and items for her family but had to cancel due to the weather. In the aftermath of the storm, Jack and Lucas set about repairing the damage and it was Lucas who first noticed the ship. Jack went to investigate and came across the comatose form of Mia Winters. He brought her back to the farm and left her with Marguerite who tried to offer her the old bedroom but Mia insisted she stay in the trailer in the garden. Marguerite got her settled but left before Mia could warn her about Eveline; a genetically-modified human bioweapon developed by ‘The Connections’ and capable of secreting a deadly bacterium rendering an infectant very susceptible to control. Jack had already gone back out to the ship wreck to look for other survivors as Marguerite cooked some soup and watched the news headlines with Zoe to track the progress of the storm. When Jack returned with an unconscious Eveline, Marguerite noticed she was covered in a thin film of what looked like oil and told him to put her to bed in Lucas’ old room. She then told Zoe to get some clean clothes for Eveline from the laundry room.

Not long afterwards, there was a power cut at the main house and Eveline reawakened. She first took control of Marguerite in the bathroom and possessed her. Marguerite then tried to attack Zoe only to be briefly subdued by Jack who moments later also fell to the infection. Jack drowned Marguerite in the bath and then stabbed himself in the chest. These two ‘deaths’ essentially put them under Eveline’s complete control and yet both of them revived thanks to special regenerative properties contained inside the bacterium. Marguerite used a lantern to stalk the darkness looking for Zoe so she could be introduced to Eveline, who had already started to refer to her as ‘mommy.’ Eveline’s goal having grown up in isolation was to have a family of her own and at this moment in time she saw Marguerite as a surrogate mother and Jack a father. She tried to coax Zoe out of hiding by suggesting Eveline was just lonely and that she had a gift for her. She also struggled internally with the infection and would fight for moments of lucidity, returning to her old self long enough to try and help Zoe and give her the car keys for her to try and leave the estate safely. The following morning, Marguerite had seemingly returned to normal and had no recollection of the previous night’s events. However, she felt troubled by their new visitors and hadn’t been able to sleep since they arrived. She also agreed with Zoe that there was something strange about them both. In the following days she felt nauseous and experienced hallucinations. She went to see her local doctor, Crawford Lang, who gave her an x-ray. The results showed dark patches in her cranium that were identified as fungus deposits related to an unspecified mold. Lang was extremely concerned and wrote to Marguerite asking her to attend Dulvey General Hospital as a matter of urgency to undergo further tests. But Marguerite ignored the letter as her infection progressed from stage 1 to stage 2 and she became completely under Eveline’s control. Normally the infection if left unchecked would progress to the third and final stage whereupon every cell in Marguerite’s body would be taken over by the bacterium and she would mutate and lose her human form entirely, however because Eveline saw Marguerite as her new mom, she restricted her infection level to stage 2 at all times. Now completely subservient, Marguerite complied with Eveline’s every wish and she was given responsibility of hiding a deceased D-Series subject recovered from the ship. Marguerite viewed the item as a gift and hid the corpse inside the detention room on the second floor of the old house. Marguerite viewed it as a sign of Eveline’s trust in her and that it would lead them all to happiness. She vowed to kill anyone who would corrupt that happiness.

In the months that followed, the Baker’s began to withdraw themselves from society, leading the local parishes to suggest they had simply vanished which fuelled all kinds of unsavoury rumours. Eveline wanted more people to join her family and Marguerite worked with Jack and Lucas to abduct local travellers and tourists in the area. These subjects were put before Eveline who would deem them suitable to join her growing family. If not, they were either sadistically killed, or slowly converted into a Molded creature. Soon the Baker’s themselves were counted among the victims and declared dead to the wider community, with no one realising they were the ones doing the killing. Their planation was right in the epicentre of the disappearances and no one would venture near it after stories spread that it was haunted. The family also turned to cannibalism and Marguerite would prepare food made up of cooked human body parts, all infused with the bacterium to infect their captured guests. Like Jack, the infection bestowed Marguerite with regenerative abilities, but additionally she was also granted the power to control mutant insects that hatched from the bacterium Eveline was able to produce. She also developed a bizarre mutation in her lower abdomen which became something akin to an insect hive. She could ‘birth’ even more of these insects and control them at will.

Throughout the next couple of years, Marguerite and Jack continued to live their ‘family life’ with Eveline and Marguerite convinced herself she was being kind and courteous, opening up her home and her family, only to become severely irritated when this supposed courtesy was thrown back in their faces by their captured guests. She also took ownership of the second floor of the old house and built an altar where the original case containing the D-Series arm was kept. She would not allow anyone inside and became livid at Zoe who she knew was trying to find a way inside. When Eveline started rapidly aging because she was not receiving her treatment, Marguerite wrote Zoe a note warning her to keep away from her altar and promising to kill her should she ever disobey. Although she was also infected, Zoe was still able to retain some self-will because she had never died and regenerated following her initial exposure. This made Marguerite and the other family members extremely wary of her.

In 2017, an online paranormal investigations team calling themselves ‘Sewer Gators’ came to recce the supposed abandoned plantation for an upcoming episode of their program. All members of the production crew were killed save for cameraman Clancy Jarvis who Eveline took an interest in as a new prospect for a new brother. He was locked up in the master bedroom and Marguerite tended to him by serving up some contaminated food she made especially for him. She promised to release Clancy and let him go out and play so long as he ate his meal. But when he refused, Marguerite erupted into a rage. After a brief struggle, Clancy escaped and stabbed her in the neck, temporarily incapacitating her.

The following month when Ethan Winters arrived looking for Mia, Marguerite again became incensed when he refused to eat up the contaminated meal she made especially for him. She later captured Mia in the old house after she briefly escaped her captivity. She was aware she and Zoe were plotting something with Ethan and vowed to halt any disruption to their family. She later confronted Ethan when he tried to access her altar and when he caused her enough damage, Marguerite underwent a mutation and developed enlarged limbs. By now Eveline had discarded her as her ‘mom’ and reverted back to favouring Mia, meaning Marguerite’s infection was no longer restricted and was rapidly increasing to stage 3. The mutated Marguerite confronted Ethan for a final battle in the greenhouse where she used her bugs to attack him, but Ethan’s acquired firearms were enough to knock her down for good. Her regenerative powers lost, Marguerite slowly calcified and died before crumbling away into dust.