Marilou Mabou was a native of Sonido de Tortuga Island; one of two small islands located in the Caribbean Sea off the coast of South America. She was a good-natured and friendly girl, always willing to help others and see the best in people.

She was friendly with Claire Redfield and Inéz Diaco of TerraSave after they once gave a talk at Marilou’s school when she was younger. On Tortuga, Marilou’s family lived at Ague Village which was the only settlement on the island. 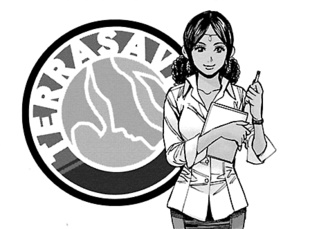 As she got older, her parents tried to match her with a suitor named Lopez, but Marilou wasn’t so keen. Still being so young, Marilou did not know a lot about being in love. But regardless Lopez was chosen to be her husband and this led to a lot of tension between them all. Marilou’s brother, Eliseo, was extremely protective of his sisterand stepped in to intervene. In turn Lopez disagreed with Eliseo and they often clashed.

Sometime later, the problem was seemingly solved when Lopez suddenly and mysteriously vanished from the village never to be seen again. Unfortunately for Marilou, Eliseo disappeared shortly afterwards in similar circumstances. Their disappearance coincided with the appearance of a mysterious Shaman on the island and unbeknownst to everyone, both Lopez and Eliseo had been taken as test subjects for the ongoing Kodoku experiments run by Alex Wesker and Dirk Miller, both formerly of the Umbrella Corporation. But this was not the end of Marilou’s suffering as sometime later both her parents died in unknown circumstances, leaving her all alone.

Marilou remained on Tortuga Island but was wise to keep away from the Shaman and his practices. But one night in 2014 she entered the ruins of the abandoned U.S. Military base, a sacred place the Shaman had long ago taken as his own shrine. Inside she found the chamber where Lopez, now better known as the Schraube Damon B.O.W., was in slumber. Terrified, Marilou fled from that place and later got in touch with Claire and Inéz. TerraSave had already received a report of a strange barracuda in the local waters that had attacked a fisherman so this information was enough for them to launch an investigation.

When they arrived, Marilou took Inéz to the ruins and showed her the Schraube Damon. Inéz immediately recognised the creature as a B.O.W. and tried to contact Claire before they were both captured by The Shaman. The Shaman referred to the creature as Marilou’s husband and later after they escaped, she relayed her suspicions about the Damon’s identity to Inéz. They were later attacked by the Schraube Damon and Subject 001193 and both creatures displayed unusual behaviour in Marilou’s presence. When they later found themselves in Umbrella’s hidden facility beneath the ruined base, researcher Dirk Miller explained all about the Kodoku Project and confirmed to Marilou that the two warring creatures were in fact her long missing brother and her chosen suitor.

The Schraube Damon was eventually killed by Subject 001193, and he later protected her in the final fight against a mutated Zǐlì. Marilou was one of only four survivors of the incident. In the months that followed, Marilou began working with TerraSave.