Mark was born one year after the conclusion of the Second World War and joined up with the U.S. Army at a young age. His unit was deployed to Vietnam during the 1964-1973 conflict as part of an invasion force to protect South Vietnam from its aggressors in the North. Mark was in his late teens at the time and learned to grow up very quickly. He experienced his fair share of bloodshed and combat, including the use of napalm gel, but also learning an assortment of military and survival skills along the way. Upon returning from the war, he was haunted by his experiences but had fond memories of his comerades and his own heroic actions.

After retiring from the army, Mark led a quiet family life in Raccoon City with his wife who soon gave birth to a son. He worked for a security firm called Scutum (Latin for shield) and despite being 52 years old by 1998, his robust strength had not dimmed at all. He had tasted the emptiness of war and there was a side to him that was mentally fragile. 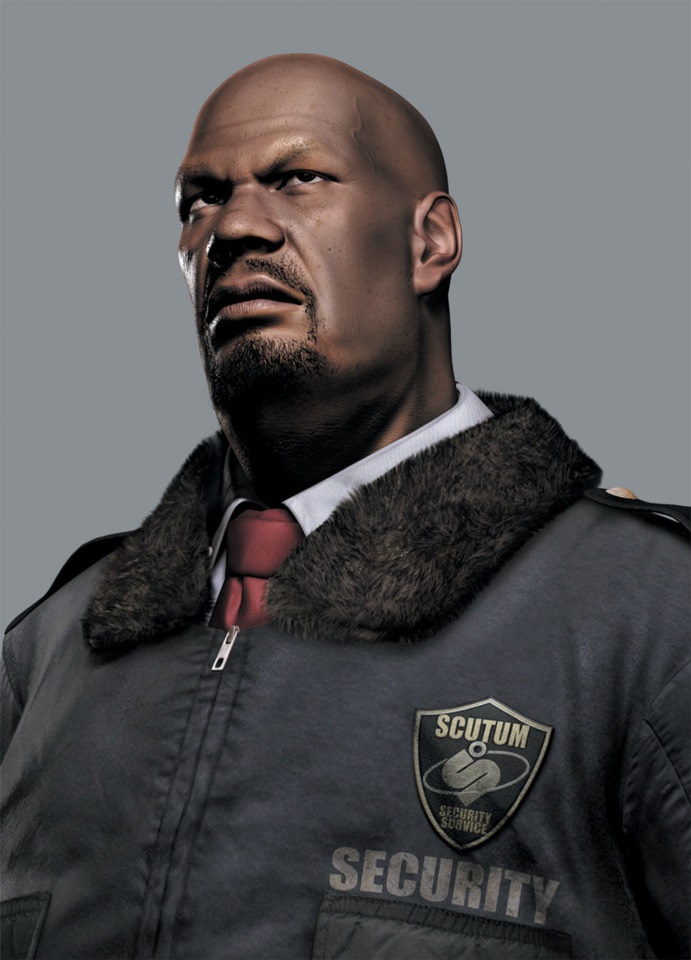 More than anything after all his experiences, he just wanted to live a peaceful life. However, his relationship with his son was distant and they struggled to bond, despite often visiting the Elephant show at Raccoon Zoo together. Over time these problems escalated and Mark suffered increasing family problems and strained relations with his wife and boy. To escape from this stress he would turn to gardening, a hobby he had a big passion for, though he had been neglecting his garden of late. He was also an avid book reader and often turned to them for help rather than other people. The self-help books he read included titles such as ‘The Ideal Father’, ‘How to raise Children’, ‘How to Stop Your Marriage from Cooling’, ‘How to Scold Your Kids’ and ‘Sports with Adult and Child’. His family troubles had also made him depressed and he turned to alcohol for comfort, though he knew deep down it would not solve his problems. He tried to branch out into new ventures by taking up both photography and oil painting. He also enjoyed going to the Opera. Wherever he went, he always carried a photo from his military days as it always made him feel so nostalgic. He was also quite a stubborn man which probably contributed to his family problems. He also admitted a dislike of hospitals, but being a little overweight he knew he should probably book himself in for a physical.

By September 1998 Mark was planning on making amends with his family by taking them all on a vacation. He was also going to buy a jewelled ring for his wife and a skateboard for his son. He had just finished his shift the night the Raccoon outbreak spiralled out of control and he and his colleague Bob were enjoying a quiet beer and a meal in J’s Bar. But unbeknownst to both of them, Bob had already been infected with the t-Virus and was in the latter stages of zombification. He eventually collapsed unconscious just as the zombies gathering outside entered the bar. But Mark did not abandon his friend and helped him and several other survivors escape. They made their way upstairs to the roof where Bob finally became a zombie and Mark was forced to shoot him dead.

Mark fought through several other dangerous locations throughout the following week in Raccoon City, working alongside several other survivors to stay alive. He built up a good working relationship with a plumber named David King although in contrast he often came into conflict with Kevin Ryman; a R.P.D. cop also part of their group. Mark used the survival skills he’d learned in Vietnam to survive, often taking charge of the group and referring to them as a unit, a platoon or a recon team. He kept his cool throughout the incident due to his previous experiences, even recalling how his father had once told him that there wasn’t a place left on Earth that hadn’t been touched by war. His own experiences were remembered with regret and cynicism and sometimes this threatened to break his resolve as the memories of war ran so deep for him. But throughout Raccoon City he managed to hold his nerve and fought to keep himself and his friends alive. He also often wondered what became of his wife and son.

In the end, Mark managed to escape from the city just moments before it was vaporised in the sterilisation operation. Following the incident, he travelled to pastures new and moved back in with his wife and son who had thankfully been out of town during the biohazard. Now he was finally able to settle down and enjoy a calm and peaceful life. Upon reflection, Mark believed his experiences in Raccoon City were just as traumatic as what he’d experienced in Vietnam as a youngster.