Marvin Branagh was a well-respected and well-liked police officer working for the Raccoon City Police Department. He was a supervising officer in charge of several beat cops including Kevin Ryman and Rita. He was based in the small room inside the eastern office and kept a bottle of indigestion tablets there he took almost every day because he regularly suffered from gastrointestinal distress.

Marvin was one of several officers with concerns about their boss, Brian Irons, and believed him to be possibly on the take. Marvin had been gathering photographic evidence of the Chief’s book-keeping records which he kept on him at all times. Fred, another close colleague of Marvin’s, had a roll of film containing Irons’ fax records. Finally, another unnamed officer was gathering evidence about the chief’s unhealthy obsession with Mayor Michael Warren’s daughter. 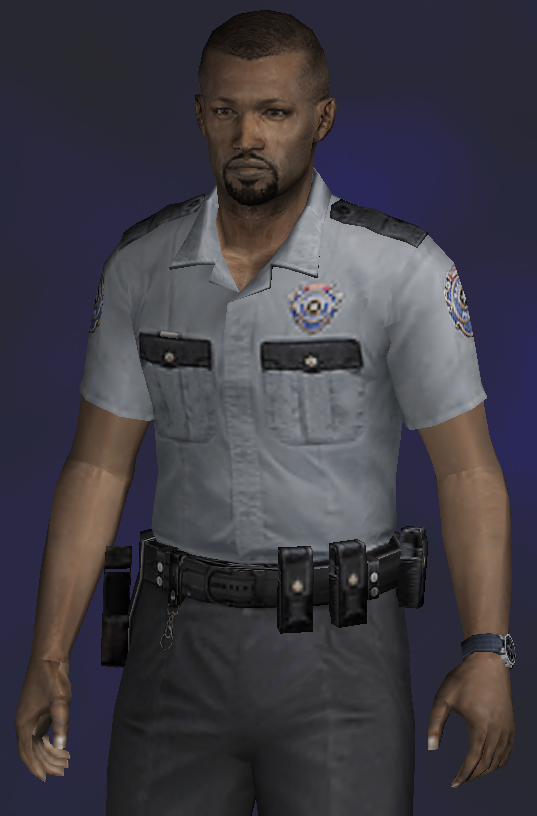 In September 1998, Marvin was getting ready to welcome an incoming batch of new recruits, including Leon S. Kennedy, when the biohazard outbreak engulfed Raccoon City. As supervising officer he reviewed an ongoing case concerning a theft from the decorative clock outside of city hall after two of its gems were stolen, however due to the ongoing crisis there was a shortage of available officers to deal and Marvin was forced to suspend the investigation.
By September 27th, a majority of the police officers had been wiped out and the station was insecure yet several pockets of survivors were still holed up inside. Marvin was inside the main hall and eastern wing alongside Aaron, Fred, Tony and Rita. He was full of regret and privately wished they had done more to listen to their surviving S.T.A.R.S. colleagues. He held a meeting in his office where they went over some old architectural plans back when the R.P.D. was still an art museum. Marvin discovered several underground tunnels originally used for transferring fragile art pieces in and out of the building and suggested they could use it as way to get outside. Unfortunately the tunnel was so narrow that Rita was the only one who could fit through, but it was agreed she would try and then bring back a vehicle to extract the others.

Over the next several hours, Marvin co-ordinated the station defence as Aaron, Tony and Fred each took up guard positions at various insecure points and awaited Rita’s return. Sometime later, Rita got in touch over the radio and informed Marvin she was on her way back. But before she arrived, Aaron, Tony and Fred were all killed and Marvin himself was bitten by a zombie in the outside courtyard after he’d let his guard down. Ultimately he chose to stay behind as Rita evacuated the others. He locked himself inside the western office and contemplated his fate. The following afternoon he had lost consciousness due to his injury and was found by Jill Valentine. She saw that he had been mortally wounded and believed him to be dead. But when she returned sometime later whilst being chased by the Nemesis T-Type, Marvin had  vanished. A day later on September 29th, Marvin was found by Claire Redfield who had recently arrived in time to search for her missing brother, Chris. He told her about the mansion incident and how no one believed the surviving S.T.A.R.S. members testimonies. He also told her they had lost contact with Chris over ten days ago. He provided Claire with a key card so she could access other parts of the station. She vowed to come back for him and when she did sometime later, Marvin finally succumbed to the effects of the t-Virus and transformed into a zombie.