The Megamycete is a super-organism and the creator of the substance that would also be referred to as the “Mold”. It is a collection of fungal roots that over presumably hundreds of years grew and grew undetected to the outside world. The only known specimen of Megamycete was located deep below The Village in Eastern Europe where its roots had spread throughout the area absorbing the bodies of any deceased individual.

It became the source of fascination for Miranda after she accidentally discovered the structure and upon touching it was infected with the Mold immediately. The effects were dramatic as Miranda adapted to the infection becoming a super-powered individual. She was bestowed with long life and near impervious to damage making her close to immortal. With this new power Miranda took control of The Village which formed a cult around her. For the next hundred years, Miranda, the Megamycete and The Village as a whole remained more or less in secret from outside interference or organisations. 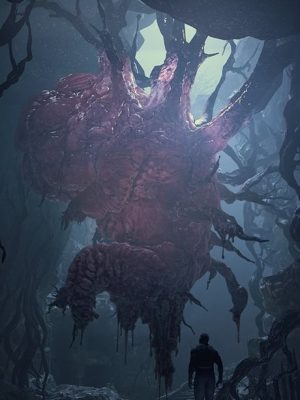 Not only was Miranda granted considerable power when she was infected by the Mold, she also heard the memories and thoughts of the deceased that had perished in the surrounding Village. Crucially, this included her daughter, Eva. Astounded by this revelation, Miranda was convinced that Eva could be resurrected through the Megamycete and dedicated the rest of her life in the pursuit of this dream.

Miranda therefore set about to explore the properties of the Megamycete and attempting to control the infection and locate that suitable vessel. It soon became apparent that Miranda herself was extremely special – bonding on cellular level with the Mold, the likes of had not been seen before and since. What made Miranda so adaptable to the Megamycete remains unclear.

The Mold itself is extremely potent and whilst it had the ability to cure patients of the Spanish flu, the effects were temporary as they would soon mutate into hideous monsters called Lycans. Lycans themselves were seemingly the base by-product of Mold infection – a primitive creature that would see a human mutate into a wolf life creature. it retained some memories of his former life and could follow basic commands. It was not however that intelligent and sought out flesh and blood to sustain it.

It was during these experimentation’s that an unexpected breakthrough occurred – the discovery of an accidental Mold infection – later to be known as the Cadou. Miranda discovered small parasitic nematodes infected by the Mold that themselves could act as carriers and vessels for the Mold. The nematodes reacted favorably to the Mold and did not lose any of their parasitic tendencies post infection. This meant that when a host was infected with the Mold infected Cadou – the results were more stable, consistent and also ensured a higher degree of adapters needed for her grand plan. The nematodes would spread the Mold throughout a hosts body rapidly but would multiply at the rate of a usual parasite. Once inside, the parasite would settle and spread the Mold accordingly. Miranda christened the parasite the Cadou of “gift” as it greatly enhanced her own understanding of the Mold. It also enabled the Cadou to be administered to hosts and could be replicated with ease.

With this new parasite, Cadou were to be used in all future projects and test subjects. Miranda theorised that if a host had a higher brain affinity to the Cadou then they would retain their humanity to an extent and be in control of the infection rather than a Lycan. Three hosts were documented to have this requirement – Alcina Dimitrescu, Karl Heisenberg and Donna Beneviento. All three descended from the great Lords of the area. A third – Salvadore Moreau was deemed to have a low brain affinity, but mutated to a unique aquatic monster instead. It is unknown why this was the case.

Despite this higher brain affinity, neither were deemed to be suitable vessels themselves, all displaying elements of failure. Alcina retainer her hereditary blood disease, Heisenberg’s mutation saw him develop magnetic organs and Beneviento’s own mental health issues were perpetuated and ampfiled rendering her mute and all communication conducted on her behalf through a doll instead. Despite this however, Miranda had now 4 Mold infected humans she could lead and these 4 were re-established as the 4 Lords of the region with Alcina reclaiming Castle Dimitrescu for her own, Beneviento locating to the family mansion, Moreau settling in the reservoir area and Heisenberg re-opening the family factory on the outskirts of The Village.

The development of the Cadou as a viable vessel for the Mold meant that Miranda could provide multiple Mold samples to the Lords so they could all help her locate the vessel she needed for Eva. Through this delegations many new B.O.Ws were created using the Cadou/Mold combination. This included the Varcolac whereupon a Lycan was injected with wolf DNA. The reaction saw an even more canine like mutation occur, more primitive but far more dangerous than the standard Lycan. Corpses of test subjects were also used with the Cadou to try and reanimate them with the help of cybernetic implants. This was the basis of the Soldat B.O.W that Heisenberg oversaw. Draining the blood of a handmaiden and infecting them with the Cadou created the Moroacai monstrosity and eventually the Samca flying beast. Other hosts also reacted a little more favourably than other men of The Village. These enhanced B.O.Ws were known as Urias and were more intelligent and powerful than the standard Lycans. They were also strong enough to yield large weapons.

All of this creation however was pointless in the eyes of Miranda until she located the suitable vessel to resurrect Eva. After learning of Rosemary Winters – a child born of a previously mold infected mother and as it would later transpire a Mold Human in the form of Mia and Ethan Winters – Miranda captured the child in the belief that she was the perfect candidate for the ritual procedure.

After Rosemary was infected with the Mold she crystallized and her body was split into 4 flasks – one each given to the Lords in preparation of the ritual. The flasks were eventually inserted into the stone at the ceremony site by Ethan who had recovered them all from the fallen Lords. In doing so, the next phase of the ritual was close to completion. Miranda prepared the Megamycete super organism for the ceremony and in turn the roots of the creature erupted from beneath the ground underneath The Village. Vast tendrils grew across the area creating organic boundaries. This growth had attracted the attention of the B.S.A.A who arrived on the scene and attempted to take down the overgrown fungus. It was only through the efforts of Hound Wolf Squad and a targeted weapons system that progress could be made. Alpha Team leader, Chris Redfield was able to locate the core of the Megamycete and place N7 explosives around the creature.

Ethan meanwhile, somehow clinging onto life after his heart had been ripped out, confronted Miranda once and for all. But it was too late. Miranda tapped into the Megamycete’s power and using the flasks and memories of Rosemary began the resurrection process. In that instant the child was reborn as a perfect Mold Human. It was not however, as Miranda had predicted, Eva. Instead, Rosemary had been reborn once again.

Enraged by this failure and false child, she turned on Ethan. Her energy and powers of the Mold and Megamycete had been significantly declined and in that moment Miranda’s long standing Mold infection took over her body causing violent mutations to occur. Ethan was able to defeated Mother Miranda and in doing so brought to an end her dreams of being reunited with her daughter. He rescued Rosemary and brought her to Chris who was nearby. Ethan, sensing his own impending death, took the detonator and activated it destroying The Village, the Megamycete and ultimately, himself. It is unclear if there are any remaining samples of the Megamycete or the Cadou parasite post The Village incident.

After being approached by the criminal syndicate The Connections in 2000, Miranda provided them with a sample of the Megamycete and DNA of Eva for experimentation. Through this a mutated version of the Megamycete was discovered which was dubbed the Mutamycete. Genetically the two substances were extremely similar – both capable of forming super structures and through administration, creation of biological weapons. More details here.