Merah Biji was a B.S.A.A. agent working for the Far Eastern branch. She went from relative obscurity to becoming one of the most talented Special Operations Agents in a very short space of time. Her background can be traced back to the infamous Raccoon City incident in which her parents were killed. Her life was only spared because her mum and dad insisted she remain behind at home with her grandfather. She mourned their loss and grew up despising bioterrorists and looking for ways to seek vengeance against those who took her parents away. She studied hard science and worked hard to gain an impressive reputation in the field of chemistry and physics. Additionally, despite her academic nature, Merah was also a skilled gymnast and had a strong passion for oriental food.

She eventually joined the B.S.A.A. as a scientist and was assigned to the Far Eastern branch based at a research technology centre. There she worked for a number of years trying to find ways to find more effective ways to combat bio-weapons and developed a personal moniker of ‘Chemical Queen Bee.’ 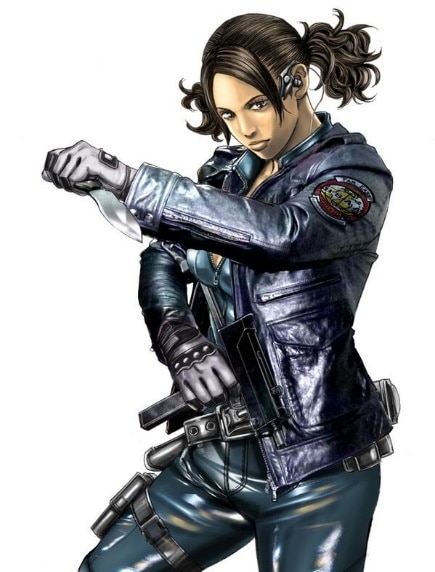 She always had a picture of her parents on her desk to remind her of happier times. Eventually, by 2009 she became bored with her work and having completed her latest research project, requested a transfer to the field units, wanting to train as a Special Operations Agent. Although scorned by her peers, Merah successfully completed basic training, demonstrating a strong desire and determination that impressed her instructor. She also came to the attention of Professor Doug Wright, a consultant to the Far Eastern branch and friend of Chris Redfield. He advised she not be underestimated, despite her entire working career being spent in a laboratory with no field experience. Merah always took a battering in training, but vowed to come back stronger every time.

By 2010, she had vastly improved her skills and regularly dished out beatings to the other trainees during their exercises. She was now the recruit with the biggest potential and almost ready for field work. Chris Redfield, now an S.O.U. Captain, came over to Asia to visit the training centre along with his new subordinate, Piers Nivans. He was impressed with her skills and as she sparred with Piers, Chris noticed she held out against him longer than any other recruit he’d seen. For Merah, meeting Chris and Piers face to face only inspired and reinforced her determination not let anyone suffer the pain she had once suffered.

In 2012, Merah was now an experienced field agent and was reacquainted with Chris and Piers when they were over in Asia taking part in an operation involving t-Virus B.O.W.s. After they successfully completed the mission with a 0% casualty rate, Merah received her next orders to link up with Doug Wright. Chris and Piers decided to accompany her as Chris wanted to catch up with his old friend. Together they travelled over to Bennett University in Singapore where Wright worked as a virologist professor. However, he had taken leave to go to Marhawa School and hadn’t been heard from since, despite him being due back several days ago. Sensing something amiss, Merah, Chris and Piers decided to drive over to the academy, a trip that would take them several days.

When they arrived at the isolated locale, they found the whole campus engulfed in a biohazard caused by an experimental C-Virus test subject supervised by Carla Radames of Neo-Umbrella. All of the students and staff had become zombies, including Professor Wright. Merah battled with Bindi Bergara, who was now a powerful J’avo creature, capable of extraordinary regenerative abilities. Merah managed to wound it to the point where it crysallised into a cocoon before re-hatching as a powerful spider-like creature. But as it attacked again, Merah was saved by Piers who arrived in a jeep and crashed into it. However, as they were escaping back towards the helicopter, they were attacked by experiment C-16: a prototype ‘Lepotica’ Complete Mutation Species that used to be Nanan Yoshihara. This time Merah sacrificed herself and saved Piers by pushing him out of the way only to be impaled through the chest. On the flight out of Marhawa Academy, Merah sadly succumbed to her injuries, but not before asking Piers to look after Chris and telling them both to create a new world free of bioterrorism.