Mikhail was a member of Umbrella’s Biohazard Countermeasure Service and Commander of Delta Platoon. Originally from St. Petersburg, he rose up the ranks to become first a Lieutenant then a Major in the army of the former
Soviet Union.

After the dissolution of the U.S.S.R, he left the military and focused his efforts towards helping the ethnic minority of which his wife was a part of. He eventually became leader of an underground guerrilla organisation and participated in a number of terrorist actions aimed at liberating various native peoples. Using his impressive leadership abilities, he was highly successful in a number of well-organised actions. He was among other things, responsible for an attack on the residency of the Ambassador. 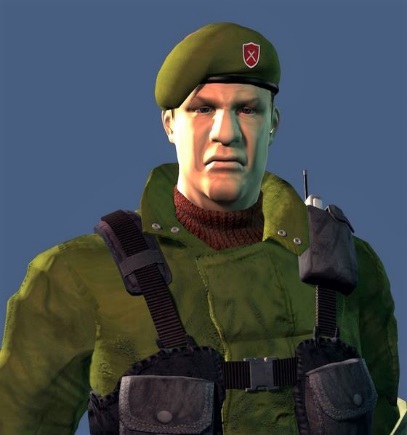 His subordinates would always remember him as an honest leader whom they trusted with their lives. Mikhail was eventually captured by government troops during a mission where he tried to lead a group of refugees over the border. In order not to risk the lives of the civilians that were with them, he and his comrades immediately surrendered. During the trial, he was sentenced to death and his execution was set for the next day. However, just hours later, Mikhail was offered a deal by a security expert who represented Umbrella. In exchange for the safety of his men, he was to join a paramilitary unit of the Umbrella Corporation; the Umbrella Biohazard Countermeasure Service. With certain death looming large, Mikhail didn’t hesitate and signed his life away to Umbrella.

As part of his contract, his wife and his comrades would be pardoned and released from jail immediately. It was a small price to pay for saving those he loved.
After some time with Umbrella, he was appointed commander of Delta Platoon, leading up to 30 mercenaries and there he truly demonstrated his brilliance as a leader. His powerful spirit of defiance and motivation forged a highly loyal unit that drew out the best qualities in all his subordinates. He grew close to every single member of his team. As part of the Raccoon City rescue operation, Mikhail and Delta Platoon were deposited into the centre of the city and charged with the protection of City Hall. But they were soon besieged by zombies and the unit was wiped out.

Mikhail was severely injured but managed to survive the attack as the sole survivor. He managed to find Nikolai Zinoviev of Unit B and Carlos Oliveria of Unit A and together they took shelter in a tram car parked in the depot of Central Station on the Central St/Park St interchange. Because of his injuries, Mikhail was forced to wait inside the tram whilst the others ventured back into the city to find components in order to get it operational again. He also met Jill Valentine when Carlos brought her back to the tram to join their escape attempt, although he was initially hostile towards her. Feeling helpless, Mikhail tried to help his comrades and left the tram to assist with the search. However, he did not get very far as destroying a pack of zombies on the station platform sapped the last of his strength and he collapsed. Luckily, Jill was nearby and managed to get him back safely inside. Mikhail apologised for his earlier conduct towards her and explained he was frustrated and felt so useless because of his injuries. He also appeased her by insisting he and his men were mercenaries and not directly affiliated with Umbrella. Therefore none of them were responsible for this mess.

Eventually, they managed to get the tram running again and set off for the St. Michael Clock Tower where the extraction chopper would meet them. However, whilst en route they were attacked by the Nemesis T-Type. Mikhail sacrificed his life to save Jill from the beast by blowing both himself and the creature up with a grenade. Despite his bravery, the Nemesis was only slowed down, but it was long enough for Jill and Carlos to make it safely to the clock tower.