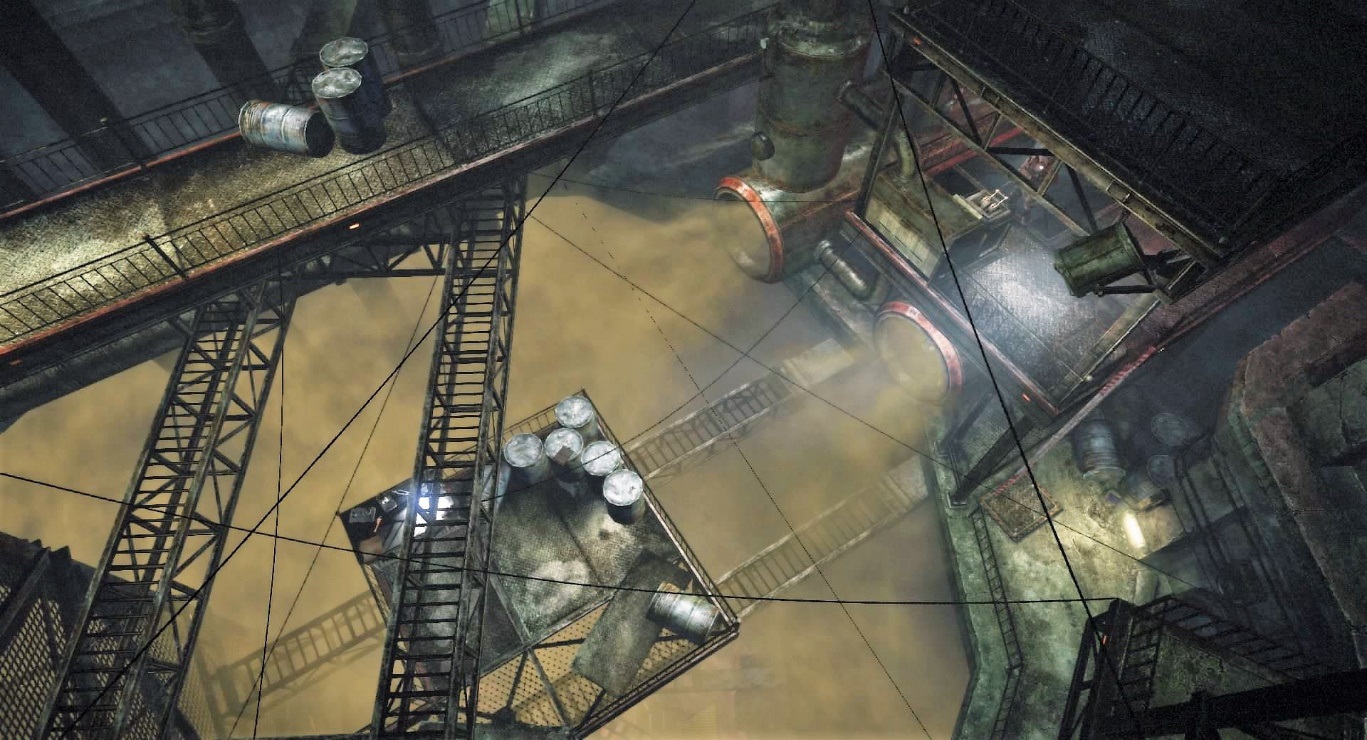 The mining pits of Sushestvovanie Island have a long history and were integral to the functionality of its society and economy. Resources were limited across the island because of largely sterile land and severe climate that led to poor crop production, but deep beneath the barren surface lay an abundance of resources, including large coal reserves. Mining operations soon began in the early years of the Soviet Union and many Russians migrated to the island to work in the mines and enjoyed a rich life appropriate to the labour. The mining operations led to the island experiencing a period of prosperity, despite Sushestvovanie being in such a remote location. Eventually however, the mines were overworked and its natural resources were eventually depleted. By the late 1970s the mines were empty and the island soon fell into poverty.

In the year 2000, Alex Wesker and her team of subordinates arrived to scout the island looking for a permanent settlement to set up future operations separate to Oswell Spencer and Umbrella. Alex appealed to the inhabitants and promised to revitalise the economy, using syphoned funds from Umbrella to reopen and expand the mines, constructing an expansive underground facility for the alleged purpose of producing and developing new pharmaceuticals. This new opportunity provided jobs and rebooted the island completely, leaving those still living there in complete admiration of their new ‘saviour.’

Whilst construction was underway, Alex returned to Umbrella and Spencer under a false pretence of loyalty so she could continue to have complete access to his wealth and resources. She left her loyal subordinate, Stuart, behind on the island to oversee operations. By 2006, the new mine facility was completed following six years of development and boasted a new research laboratory and several new levels. Upon completion of the mines, Alex abandoned Spencer and relocated to Sushestvovanie Island full time so she could further her own plans. With a new research facility, she was able to begin viral research and an ambitious project to extend her life by transferring her consciousness into a new human ‘vessel’. The research facility was used to research and perfect the t-Phobos virus, using the unfortunate miners and their families as guinea pigs. From 2008, everyone who worked in the mines had to sign a contract to work and live on site for 12 months indefinitely, meaning their families would not become suspicious when they did not return home. In later years the laboratory and factory facilities were repurposed and used to research the deadly Uroboros Virus. The mines were also connected to an expansive tunnel network that led out of the cliffs and onto the rear coast of the island.

Surface Quarry: – The entrance to the mine is located in a clearing at the top of a cliff overlooking the landfill and water treatment yard. Access is permitted by a large crane platform and sluice gate constructed across a large ravine. Passing through an outbuilding leads to a large quarry which is where the main colliery is installed. Left abandoned since the 1970s, this whole area has rusted and overgrown with grass and weeds. The buildings and walkways have long since rusted with the gantries and stairwells declared unsafe. The remnants of mine cart tracks can be seen on elevated platforms above large wooden stilts and many old tunnels have been sealed, gated off and filled in. Directly beneath the colliery is a transport elevator that leads hundreds of feet underground.

Upper Mining Levels: – A large subterranean network of mining tunnels. These areas are at risk from poisonous gases being emitted from nearby fault lines. Prolonged exposure could lead to breathing difficulty, loss of consciousness and even death. Many tunnels cris-cross through this area with many sections sealed off and tunnel entrances deliberately filled in after all the resources were depleted. Eventually the tunnels lead to a large atrium with large construction installed and another freight elevator leading down to the lower levels. A lift activation key is required to operate the elevator. On the opposite side is a large ventilation system with large extractor fans which need to be activated to clear all the gas from the area before safe access is permitted lower down.

Lower Mining Levels: – The freight elevator at the central atrium descends some 200 feet further down before eventually arriving at the lowest level. Directly underfoot beneath a large circular grate is a nasty pool of chemical waste and corrosive liquid. Further down the tunnel a reinforced door blocks further travel unless access is permitted via a fingerprint scanner. Only researchers and those making up Alex Wesker’s staff were allowed beyond this point. Regular mine workers were forbidden from venturing into this restricted area. Beyond this door a concrete tunnel slopes down before ending at a blue door and a rusted steel shutter. Through here are some old coal deposits and a control room.

The ‘Mansion’: – A weathered stone bridge crosses over a large chasm split across the heart of the mountain. Carved into the rock on the other side is a castle-like entrance with main door and ornate lamps giving off a relaxing warm glow. Inside is a grandiose mansion house with chequered tiled floors, fine paintings and pristine golden candlesticks. This place was where the head researcher of the t-Phobos project was based and was created to help those cope with constantly living and working underground. The mansion contained a study room, lounge, bathroom, and a library amongst others, all decorated with antique furniture and traditional oak panels. An emblem key is needed to access certain rooms.

The Research Facility: – Located directly beneath the mansion and constructed over two floors, this laboratory is where a majority of the t-Phobos and Uroboros experiments were carried out. This facility is very run down and looks rusted and weathered beyond its years. Experimental specimens are kept in large culture tanks full of fresh bio-organic fluids and monitored by large machines. There are numerous experimentation chambers, torture rooms designed to monitor fear and pain tolerance levels, and a morgue for storing frozen cadavers. The laboratory has two levels of security and both Level 1 and Level 2 security key cards can be issued from the chief researcher’s office in the mansion above. The lowest level of the lab was later converted exclusively for Uroboros research and Level 2 security access was needed to gain entry to the factory area. This was a large warehouse full of steel crates and cages. This was where the most dangerous experiments were performed and the whole room was illuminated blood red thanks to numerous orange-tinted light bulbs hanging down from above. Another freight elevator in here leads even further down into the deepest part of the mine. A long, winding tunnel leads to another large chasm with a trail running across a black abyss to the final experimentation room. Banks of supercomputers are hooked up ready to observe and record experiments and an extensive ventilation system is installed above. Sealed refrigeration units store viral samples and Alex Wesker also had her grand piano installed here. This room is also connected to another tunnel network leading out to the cliffs on the rear coastline of the island.