Moira Burton was the eldest daughter of member Barry Burton and was born in 1991 to his wife, Kathy. At the time her dad was a serving Air Force officer but the family later relocated to Raccoon City when Barry was asked to assist with the planning and foundation of the S.T.A.R.S. teams. Moira was caring and loving towards her younger sister Polly and together they wrote a small note on a family photograph that Barry kept on him at all times whilst at work.

In 1998 a bluff-threat was made against Kathy, Moira and Polly when renegade operative Albert Wesker tricked Barry into believing Umbrella agents were ready to eliminate his family unless he complied with his every order. This led to a distressed Barry being forced to manipulate his friends during the events of the mansion incident. In the aftermath, Barry decided to relocate his family to Canada to keep them safe from Umbrella. 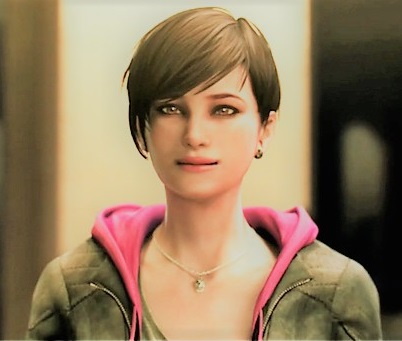 Several years later, Moira and Polly were playing around the house when they discovered Barry had accidentally left his gun case unlocked. Moira took out a loaded pistol and after messing around, it went off in her hand and badly injured Polly. Moira was hysterical at the sight of her sister lying prone on the floor and Barry soon arrived and shouted at Moira to call for an ambulance. Although Polly ultimately survived, this incident caused a deep rift between Barry and Moira and their relationship began to drastically break down. It also left Moira with a profound fear of firearms.

Over the next few years she developed a number of bad habits she persisted with purely to annoy and upset her stubborn father. She would blatantly ignore him and developed a purposeful rebellious streak and a passion for foul and abusive language. But it was through Barry that Moira came to know Claire Redfield and they developed a close friendship. It was Claire’s influence that eventually led Moira to joining up with TerraSave in early 2011. Again this was partly done on Moira’s part purely to antagonise Barry, who desperately wanted her to stay out of anything bio-terrorism related having had first-hand experience of the dangers himself. But as usual she ignored him and their relationship continued to fracture. She was dismayed that anytime she asked him for anything he always pushed back. By this point their relationship was so estranged she no longer called him ‘dad’ and referred to him only as ‘Barry.’

Moira attended a welcoming party at TerraSave headquarters to welcome new members and met up with Claire. But shortly afterwards they were attacked by armed mercenaries and abducted. They were all injected with the t-Phobos Virus and used as candidates in the so-called ‘fear experiments.’ Moira later awoke in a prison cell on an isolated island in the Baltic Sea. She was wearing a strange sensor bracelet that monitored her fear levels and was being watched on camera. After being rescued by Claire, they teamed up to explore their surroundings, encountering infected creatures known as the ‘Afflicted’ and discovering their every move was being watched by someone known as ‘The Overseer.’ Claire managed to find some guns but Moira refused to take one, insisting she was perfectly happy to point the flashlight and smash things with a crowbar.

Eventually they made it outside and found a radio tower. Moira tried in vain to send out a distress call but there was no indication the message was sent and as the sun went down on the island they saw they were trapped. The Overseer then led them to a nearby fishing village where they met up with other TerraSave survivors. After a narrow escape following another Afflicted ambush, Claire and Moira were saved by Neil Fisher and made it to an eerily abandoned residential town. It was here they came across a little girl named Natalia Korda. At first, Natalia kept running away but Moira reassured her and insisted they were like sisters because she also wore an identical sensor bracelet. After Natalia was abducted, Moira became annoyed that Claire seemed more interested in tracking down Neil than she did about finding Natalia. She teased Claire that she seemingly had more than a professional interest in their boss yet also cautioned that his bracelet never changed colour from green and that something about him appeared off. Eventually, Moira’s suspicions were proved to be correct when it was revealed Neil had betrayed them all. He had sacrificed his own employees to take part in The Overseer’s experiments in exchange for an Uroboros virus sample. But the Overseer, revealed to be Alex Wesker, betrayed Neil and infected him with Uroboros. He mutated and attacked Claire and Moira and they only escaped alive because Moira was forced to overcome her fear of gunsand save Claire. She had tears in her eyes and suffered flashbacks to Polly lying bleeding on the floor as she crawled towards the gun and then blasted the mutated Neil in the face. Sheer drive and determination to survive and help her friend overcame her profound fears and prevented the t-Phobos virus from activating.

From there, Claire and Moira confronted Alex Wesker at the top of the Monument Tower and watched bemused as Wesker proclaimed that she had conquered fear and would be reborn like her brother before suddenly shooting herself in the head. This triggered a self-destruct system and as they desperately tried evacuate, Moira was trapped by falling rubble and Claire had no choice but to leave her behind. Somehow Moira survived the explosion but was badly injured and the traumatic experience caused a higher secretion of noradrenaline around her body, making her sensor bracelet turn red. But because she had earlier overcome her fear of firearms in the fight against Neil, she didn’t mutate and actually began to adapt to the t-Phobos virus instead.

Her comatose form was found by Evengy Rebic and he brought her back to his home in the sewers to recover. It took about eight weeks before she was back on her feet and at first Moira’s relationship with Evgeny was fractious because his stubbornness reminded her of Barry. Likewise he viewed her as a spoilt little brat who didn’t appreciate what she had. But over time their relationship forged into a solid partnership as he taught her to hunt for food and survive in the wilderness. They also had to rely on each other to survive after Moira accidentally went against Evgeny’s orders not to go out at night and accidentally led the virus-carriers back to their hideout. During her time with Evgeny, Moira began to think more about Barry and even had a dream where he was all alone on his deathbed. She realised she did love her father and promised to make amends should she ever escape from the island and find him again.

Whilst hunting around the fishing village, they came across a document with a lead about Evgeny’s missing daughter, Irina. This clue led them both to the mining area where they ultimately learned she had become just another of Alex Wesker’s many innocent test subjects and had died. Evgeny himself died shortly after this, leaving Moira alone once more.

Using her new survival experience, Moira began to explore and map the island on her own, and near the mines she came across Barry’s B.S.A.A. identification, suggesting he was somewhere on the island. Moira tracked him to Wesker’s hidden underground facility and there she saved her father and Natalia from the mutated Alex.

Eventually, Moira escaped with the others on a helicopter brought to the island by Claire. Following the incident, Moira’s relationship with Barry healed completely and they began a fresh start as father and daughter. Barry also formally adopted Natalia and she became Moira’s little sister.