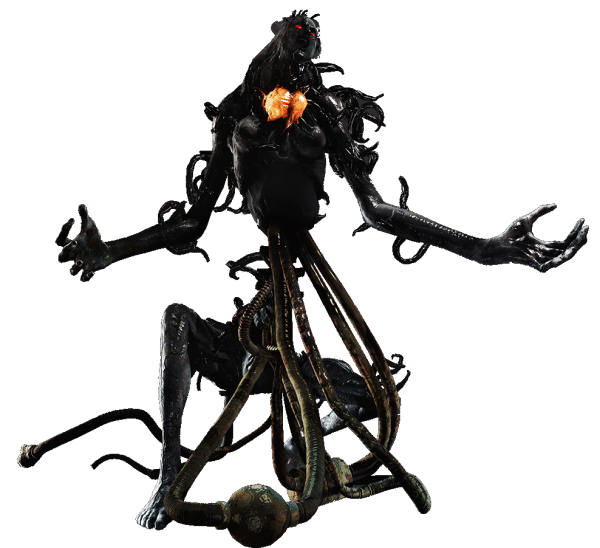 Monster Alex Wesker is the result of Wesker’s failed attempt to transfer her own consciousness into Natalia Korda and simultaneously destroying her previously disease ridden body.

For the purposes of the transfer ceremony, Natalia was placed into cryogenic sleep in a secured location and the uploading procedure of Alex’s personality began. The final phase was for Alex to kill herself and dispose of her own, withered, diseased body. But at the moment of pulling the trigger, she felt fear for the first time in her life and this caused the t-Phobos inside her body to activate as her emotional responses automatically flushed her circulatory system with noradrenaline. The virus caused her to survive the gunshot and later she had to watch as her hair turned grey and the flesh sagged from her bones, slowly transforming her over a period of time into a deformed, hunch-backed monster only barely recognisable as human. She covered herself in a robe to hide her deformities and had to wear a mask to help her breathe. Because her skeleton had expanded she also developed a special titanium frame to support her overly curved spine.

When, 6 months later, Monster Alex was confronted by Natalia she proceeded to strangle the life out of, her only to glimpse for the briefest of moments, her own consciousness awakening inside the girl. Horrified, Alex realised that her plan had actually worked, although instead of a complete transference, a copy had been created in its place. Although creating a copy had been the basis behind her plan all along, she herself was not meant to witness this herself and therefore this realisation was too much for her to bear. Frightened, Alex retreated and branded Natalia as the ‘false one.’ There could only be one true Alex Wesker and she was it.

Natalia had to die. Alex retreated to the mine and injected herself with Uroboros Virus in an attempt to bond with her brother and destroy her enemies.

She was ultimately unsuccesful as the efforts of Barry Burton and Claire Redfield defeated this monstrosity laying to rest the creature.