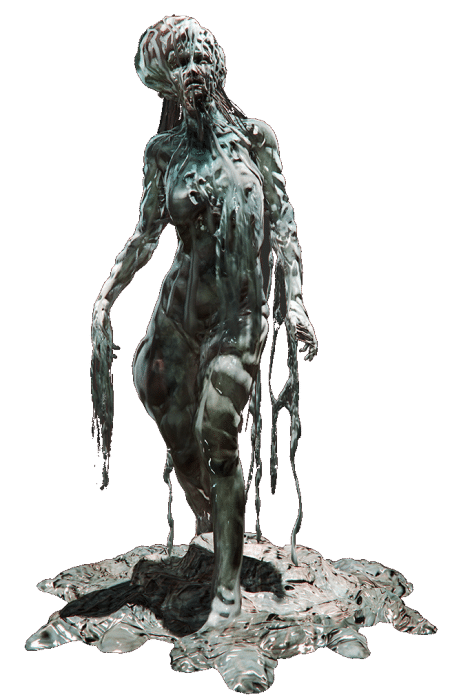 After being fatally wounded by a sniper shot through her chest and falling a great height, Carla Radames was able to inject herself with the enhanced strain of the C-Virus before she lost consciousness. After injecting herself, her eyes flick open and her whole body goes into spasm.

A thick, gelatinous substance begins to ooze out of the pores of her body, rapidly spreading out across the deck. This expandable resin is able to prop Carla up off the floor and is able to spit this substance too. Carla can still speak and laughs at the thought of accepting help from Ada Wong.

As the thick, white mass spreads, her mutated form disappears as it is sucked down into the vast pool of thick ooze slowly spreading outwards across the deck and begins to take over the entire ship. As this new monster expands, large globules or “spores” of the slime suddenly rise up and form a vaguely humanoid figure that stalks after her. Shooting these manifestations only causes them to collapse and the sentient slime to re-join the larger mass.

Eventually, the B.O.W forms close to an escape elevator as a large face near-impervious to pain and conventional firepower. However, through the use of liquid nitrogen, Ada Wong is able to cast a blow to this manifested face and remove the threat from the world.