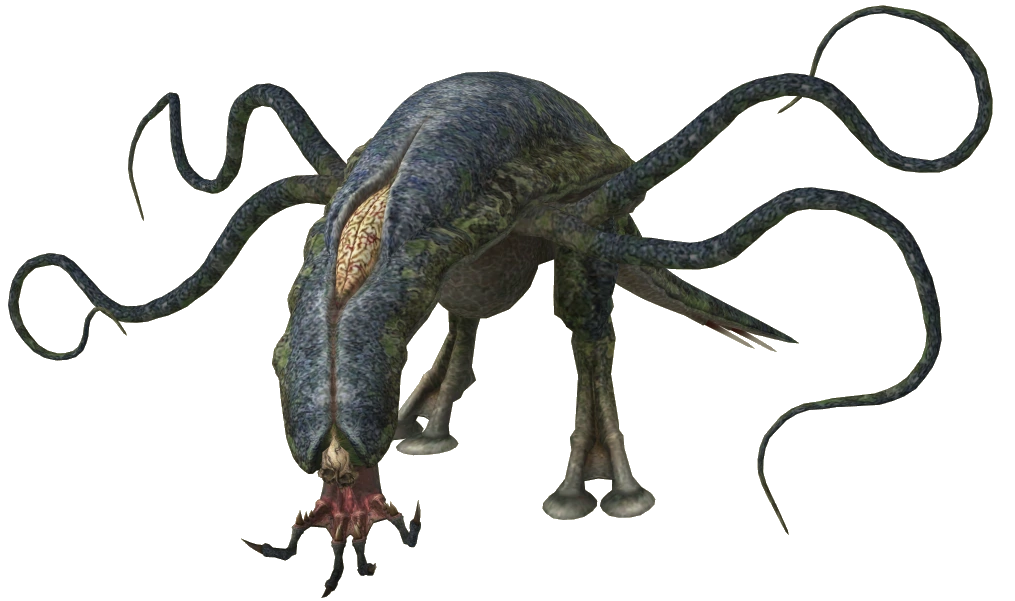 Hilda Hidalgo’s unique mutation was a result of countless injections from a special medicinal strain of the t-Virus designed to attack cancerous cells. After weeks of treatment her body mass became dramatically swollen and she developed four large tentacles, losing her human form completely. She became extremely aggressive and developed a huge appetite due to her considerably increased bulk. She was always on the lookout for fresh prey and driven by her fierce hunger. She also developed several amphibious characteristics, including webbed feet and very smooth skin. When attacking her targets, she used her tentacles to lash out or the sting in her tail to poison them. Because of her amphibious qualities, Hilda liked to remain in water and could propel herself at amazing speeds under the surface despite her huge body size. She was also capable of jumping large distances. Although she spent less time on dry land, she was still highly mobile. Research showed she lost the ability to understand humans and therefore could not be trained to follow commands, but unusually for t-Virus creatures, she retained enough intelligence to remember her former life. She would not attack Javier or Manuela at all, and if she ever heard the song she used to sing to Manuela when she was a baby, she would lie down and listen quietly, as if in a trance. Although she couldn’t communicate herself, she had the unique ability to change her skin and eye colour to express her emotions.

HILDA 1ST FORM – This was her appearance when moving in the water. Under this form, she would attack by grabbing rocks and throwing them at her enemies.

HILDA 2ND FORM – Because of the extreme feeling of anger, part of her skin turned red as a reflection of her emotion. After the protective covering on her head and neck was broken down, part of her brain was exposed. In this form, she could spew poison from her mouth and anything that gets touched would be heavily damaged.

Hilda was held in Javier’s underground warehouse in a special tank for over ten years. If anyone dared oppose Javier, they were given to Hilda as a sacrifice.