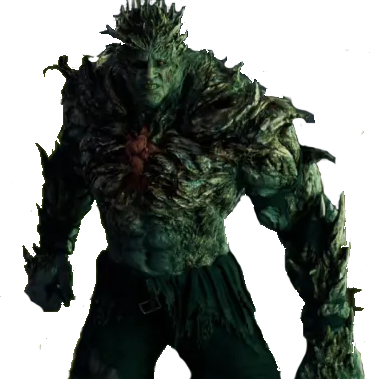 Monster Jason was the outcome of former Mad Dog’s hero, Jason not having a regular supply of inhibitor inections to supress the spread of the variant t-Virus within him.

Jason himself have become infected with the virus during the Mad Dogs mission to Panemestan in 2000. The whole incident had been used a testing ground for the virus and there had not been any intended survivors. However, after Jason disobeyed an order to leave the area, his team enountered an army of Zombies whereupon all of the Mad Dogs had been biten and thus infected.

After escaping the country, Jason was supplied with an experimental inhibitor injection to quell the spread of the virus within his body. The cost of retainer his humanity came as being subservient to Secretary Wilson and his dealings with Tricell.

In 2006, after concoting a plan with Shenmai to expose Wilson to the world, Jason was shot by US Agent, Leon S. Kennedy whilst in Shanghai. Jason was not only able to survive the gunshot, but also make it to American soil in order to enact his revenge upon Secretary Wilson.

Jason captured Wilson and after confronting him in a secret laboratory at a US Air Base, the lack of inhibitor finally caught up with him. Jason was unable to prevent the t-Virus finally causing a major mutation in him. It can be theorised that because there was a degree of co-existence and bonding with the virus inside Jason for over 6 years, when he did finally succumb to the virus, he was never going to simply become a mindless Zombie.

His mutation was startling, as he mutated into a Tyrant like creature. He grew in height and developed hard skin with a green hue. He even displayed the tell-tale exposed heart that many Tyrants exhibit. Unlike other Tyrants however, Jason retained his memory, intelligence and his ability to speak. This was highly unusual with only Monster Sergei and to an extent Nemesis, also having this ability. This micro-release and long term incubation of the virus would later be seen with Jack Norman and the Ultimate Abyss mutation.

It could also be that Jason had the correct physiological and genetic makeup to make him compatible with the Tyrant Program.

Monster Jason planned to showcase himself to the world as evidence that the US Government was involved in biological warfare. However, he was killed by Leon S. Kennedy before he was able to accomplish his final mission after he fell into a acidic water designed to neutralise biological weapons. His remains were fished out before Monster Jason disintegrated before Leon’s eyes.