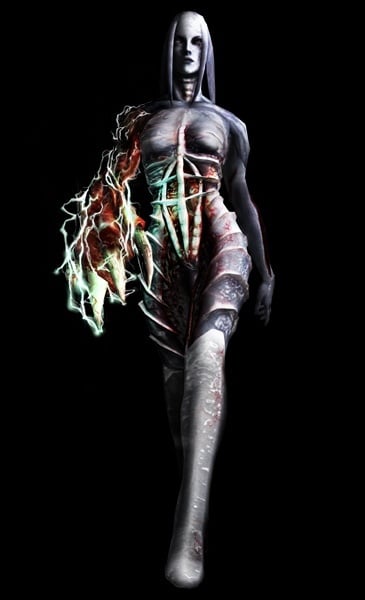 A result of Morpheus D. Duvall injecting himself with v.0.9.2. of the t+G-Virus. As such, this made him the unofficial Tyrant T-092. It can be assumed that Morpheus had sufficiently compatible genes to mutate into a Tyrant like creature upon administration of the virus.

Morpheus gained improved strength, speed and agility thanks to the virus as well as a powerful electro-magnetic field around his body, rendering him invulnerable to conventional weapons. Only the Charged Particle Rifle was strong enough to penetrate the barrier and once enough damage was done to the host body, the t-Virus would break down and the G-Virus would take over, mutating Morpheus over and over again.

Whilst in his alpha form, Morpheus still had the ability to speak and retain his memories and intelligence. This has never been seen in any other Tyrant, bar the Sergei and Jason Monsters.