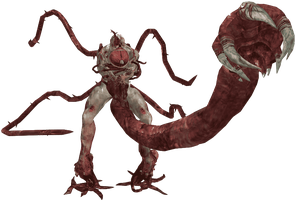 Monster Sergei was the result of Sergei Vladimir injecting himself with the perfected t-Virus.

But rather than become a zombie, his Tyrant matching DNA transformed him into a humanoid monster and he was able to fight Wesker on an even keel. Because he was a perfect adapter, his brain cells did not degenerate and he was able to retain his intelligence.

The mutation reflected Sergei’s state of mind and he sprouted gruesome thorn-like appendages all over his body. Tentacles that bound both his arms fused together to form one large striking weapon and he had smaller tentacles around his body allowing him to move around with surprising speed given his bulk. He was also able to excrete embryotic sacs containing a chemical capable of spreading the t-Virus. He also regained full control of his memories and was able to communicate despite having no mouth or apparent vocal stimuli.

About his mutation, Wesker advanced a theory that the host’s mind-set appeared to influence the evolution of the virus. Sergei mutated into a monster whose very body was the picture of suffering as he was ripped apart from the inside by thorns. But despite his new-found strength and immunity to fear and pain, Wesker was able to kill Sergei and so the final nail was hammered into Umbrella’s coffin.