Murphy was a member of Unit A from Platoon A of the U.B.C.S. security force. He began his career as a U.S. Marine and was a superb soldier blessed with almost miraculous shooting ability that ensured he was known as the top marksman in the Marines. However, his career went down the drain when he avenged the death of his brother and was sentenced to life behind bars. Armed with his father’s hunting rifle, Murphy managed to kill all of the 20 men associated with the street gang suspected of his brother’s murder. 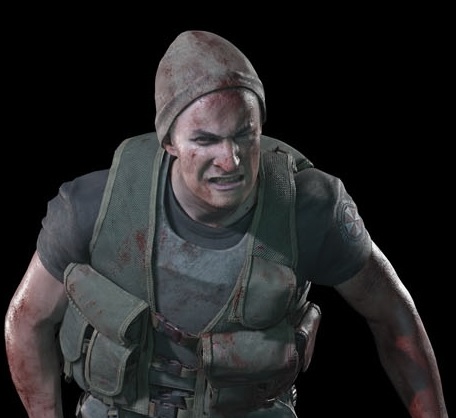 Like his Russian comrade Mikhail Viktor, Murphy was freed by one of the security experts of the Umbrella Corporation {Mercenary Coordinator}, with a view to recruiting him into the U.B.C.S. He agreed and his life sentence was commuted. He joined up the same time as Carlos Oliveria in 1996 and both became friends during boot camp. Murphy has a friendly personality and regardless of his imposing physique, was rather shy.

On September 26th, 1998, Murphy was deployed into Raccoon City along with all the other U.B.C.S. teams. Within the first two days, Murphy’s unit was completely wiped out, leaving him as the only survivor. However, whilst holed up, he drank water contaminated with the t-Virus and became infected. By the time he was found by his colleagues, he was almost a zombie and begged to be killed before he transformed.