Nadia was American born who dedicated herself to a career in law enforcement by joining the Los Angeles Police Department. There she excelled as an officer and was proficiently skilled in the use of firearms, eventually gaining a position as a sniper and recon expert for the SWAT division. Nadia was friendly and approachable, she was also a lesbian and had a partner based in San Francisco. Outside of work she had a passion for the Breaking Bad TV series.

Nadia paid close attention to the dramatic increase of B.O.W. related cases occurring all over world and this eventually prompted another career change when she applied to join the B.S.A.A. out of righteous indignation. 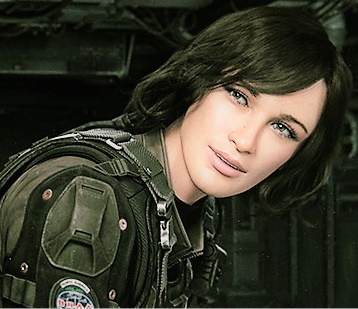 She initially joined the North American branch and her skills as a sniper impressed enough people for her to be seconded to the ‘Silver Dagger’, a special elite team able to operate with more freedom of movement compared to regular B.S.A.A. Special Operations Units. There Nadia was trained with advanced equipment and weaponry including a mobile rail cannon capable of taking out a large building.

In 2014 the Silver Dagger were dedicated to tracking down known bioterrorism and arms dealer Glenn Arias and had Original 11 member Chris Redfield assigned to their team for the duration of the mission. Nadia was part of the rescue effort to get Rebecca Chambers out of the Alexander Institute of Biotechnology after it had been purposefully contaminated with the A-Virus. She took a keen interest in Rebecca and was fascinated how she went from ‘special forces member to science geek’, concluding the B.S.A.A. was chock full of people with strange resumes.

When the bioterror attack on New York began, Nadia monitored the radio and confirmed B.S.A.A. reinforcements were on site and working in conjunction with the N.Y.P.D. She also arranged for a Silver Dagger Gambit and a Ducati Xdiavel motorcycle to be left on site for Chris Redfield and Leon Kennedy to carry out their ground mission. Nadia remained airborne with team leader D.C. on the Osprey and used aerial cannons to take out numerous tanker trucks that were dispersing the trigger virus onto the New York populace. When Glenn Arias later mutated and combined with Diego Gomez, Nadia saved Leon’s life by blasting the Tyrant creature with a powerful rain gun, destroying Diego and several skyscrapers of previously evacuated buildings in the process. She was later injured when Arias speared the B.S.A.A. Osprey with his claws and Nadia was stabbed through the shoulder. But her wound was superficial and she survived the attack, eventually helping the others to disperse the A-Virus vaccine across the city.