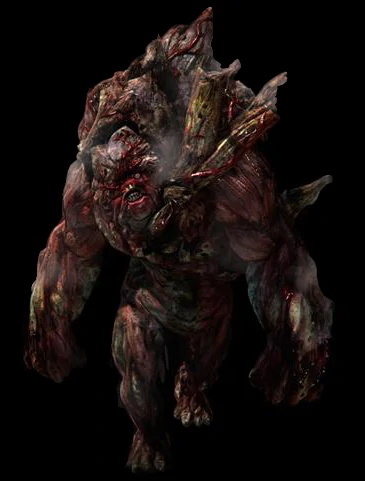 The Napad is a Complete Mutation Species of a human host reborn at the end of its mutation cycle. It is named after the Serbian, Croatian and Slovenian word for ‘assault’ and boasts superhuman strength with an enormous frame covered in hardened crust acting as armour. This mutation will attack indiscriminately with all its might and rip any target to shreds. Its outer crust of flesh represents a hardened epidermis concealing a tough musculature. They swing their powerful arms recklessly and when excited they beat their chests with their hands, reminiscent of a gorilla. The Napad’s standard body temperature is much higher than a J’avo and they emit steam at regular intervals to regulate their internal body temperature so that they don’t overheat, though researchers remain puzzled at how the creature can constantly give off steam without dehydrating itself.

Although the hardened shell covering its body cannot easily be broken, once enough damage has been done it will crack open, exposing tissue and muscle underneath. The rear section of the shell is particularly brittle, and the creature can be neutralised by attacking part of the central nervous system concealed below.

The physical build of the creature resembles a large animal rather than an insect, and at first glance the shadows and general shape make its head look like a gorilla. But closer inspection reveals a more insect-like entity with numerous small eyes and other insectoid features. There are sinewy muscles and membranes visible between its armoured plates and its internal organs are all tangled together and pulsing. Increased blood-flow for such a bulky creature reveals identifiable patches of weakened flesh across its body. To emit steam from its body its bones and ribs have protruded and turned into pipes for ventilation. The steam in turn can then be utilised as a weapon against foes.

The Napad was first documented during the Edonian War of 2012 and proved most effective against B.S.A.A. operatives. Neo-Umbrella’s leader Carla Radames used a C-Virus needle bomb to infect several operatives simultaneously and each one immediately fused into a chrysalid before being reborn as Napads.