Natalia Korda was a young girl living with her parents and when she was 3 years-old they relocated to the recently completed megafloat city of Terragrigia in the Mediterranean. The family were trapped inside the city during the terrorist attack by Il Veltro that dispersed the t-Abyss Virus across the whole area and triggered a biohazard. Although her parents were killed during the disaster, Natalia herself was rescued by TerraSave member Neil Fisher.

She had seen the deaths of her mom and dad and witnessed first-hand the final destruction of the city by the Regia Solis satellite. Natalia was administered medical treatment and had clearly suffered extreme emotional trauma. She was always thankful to Neil Fisher for rescuing her and he bought her a teddy bear as a companion which she named ‘Lottie’. 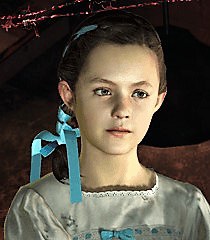 Natalia was carefully questioned by specially trained officers following the Terragrigia Panic and there was one answer in particular that was surprising to everybody. In regard to the ultraviolet radiation that was used to ultimately destroy the city, Natalia described it as ‘pretty.’ The interviewers were surprised that she could find beauty despite being surrounded by death as her home sank to the bottom of the sea. Neil Fisher took this response, and combined with her other answers, concluded that Natalia had an adverse immunity to fear. It was speculated that what she experienced in Terragrigia gravely traumatised her, and robbed her of the ability to feel frightened. Natalia was placed in a special facility under the jurisdiction of TerraSave and was brought up and educated in care. Her best friend remained her bear, Lottie, and she never left her side.

Natalia remained with TerraSave until early 2011 when Neil Fisher made arrangements for her to be captured alongside several other prominent personnel as part of his clandestine deal with Alex Wesker. Wesker was looking for subjects with a strong resistance to fear as part of an audacious mind and memory transfer procedure. Fisher had selected TerraSave members such as Claire Redfield who had experienced the horrors of Raccoon City and Rockfort Island and others such as Pedro Fernandez and Gabriel Chavez after they witnessed the aftermath of Kijuju and the Las Plagas outbreak of 2009. But Natalia was a special case. At 11 years old her mind was not yet accustomed to the horrors of the modern world but it was clear by now that her experiences in Terragrigia had made her so desensitised to such extreme situations that she could be the perfect candidate for Wesker’s needs.

Natalia awoke in a rundown penal colony having been injected with the t-Phobos virus and equipped with a sensor bracelet. She spotted Moira Burton and Claire Redfield several times and tried to run away from them until she eventually realised they were not trying to hurt her. Claire and Moira reassured her and Natalia struck up a bond with Moira in particular. But a short time later Natalia was abducted by Fisher whilst Claire and Moira were distracted in the aftermath of Gabe’s helicopter crash. Fisher delivered Natalia directly to Wesker after evaluations showed she was the perfect candidate for the mind transfer ceremony. She was placed into a stasis pod and a digitised copy of Wesker’s consciousness was uploaded into her brain before she was isolated in a chamber beneath the monument tower. Her stasis pod would keep her asleep for a period of six months to allow the mind transfer to stabilise and Wesker’s brainwaves to imprint onto her own.

Once the process was complete, a disorientated Natalia awoke in a haze of confusion and for the first time since Terragrigia she was without her Lottie bear. She couldn’t remember anything about her history on the island but was surprised to come across another Natalia. Her twin promised to help her remember and together they traversed the island looking for Lottie who was seemingly leaving them postcards. But although initially friendly, Natalia’s twin soon began to show a dark side and unsuccessfully tried to gain Natalia’s trust so she would lower her mental barriers and let her inside. It transpired ‘Dark Natalia’ was a
mental imprint of Alex Wesker’s personality trying to take over Natalia’s own.

But Natalia’s psychological toughness prevented Wesker from gaining full access and she eventually gave up in frustration, allowing Natalia to fully come to her senses and realise she was now standing on the beach of the island. It was here that she saw Barry Burton’s tug boat approaching. She teamed up with Barry as he traversed across the island looking for Moira. Fragments of Natalia’s memories began to return along the way but these memories were now corrupted by those of Wesker, leading to her false assumption that Moira was already dead. Eventually they came across a photograph of Alex and Albert Wesker together. Whilst Barry was shocked to find his old nemesis once again, Natalia’s eyes were fixed firmly on Alex, and for a girl that felt no fear, she fully admitted she could not stand Alex because she was so scary. They soon ran into Alex herself, now horribly mutated and disfigured after the transfer procedure had seemingly failed and the t-Phobos Virus had revived her following injuries from a self-inflicted gunshot wound to the head. She began to stalk them across the island and branded Natalia as the ‘false one’ after realising that a duplicate of her own personality had been transferred into the little girl. This led to a final confrontation in the laboratories beneath the mine where Alex was finally killed.

Following the incident, Natalia was formally adopted by Barry Burton as his daughter. She moved back to Canada with him and lived out a happy and content existence. But there still remained signs that her personality had become corrupted. She suddenly found herself studying the works of Franz Kafka with no apparent reason for doing so. She also became interested in B.O.W.s and bio-terrorism, eagerly reading newspaper reports on the 2013 Tall Oaks disaster which killed President Adam Benford. These strange traits displayed clear evidence that some part of Alex Wesker still remained inside Natalia and was slowly coming to the surface, growing stronger with each passing day.