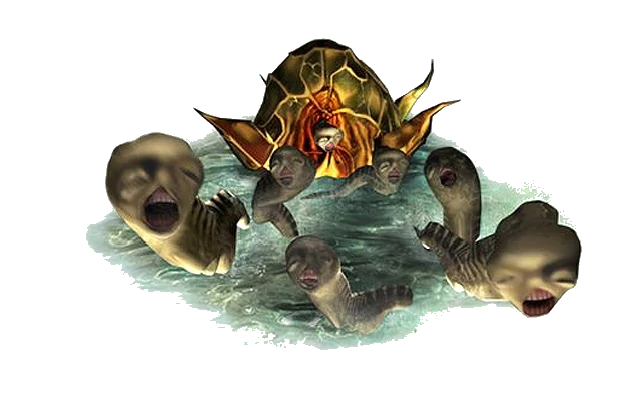 The Nautilus was a unique mutation of a strange, immobile filter feeder that usually dwelled on the ocean floor. It is believed the original base organism was an Ascidiacea which is more commonly known as a Sea Squirt. It has an almost plant-like appearance and are more related to vertebrates rather than invertebrates such as sponges and coral. Several specimens accidentally filtered into the Waste Treatment facility on Benthic Island through natural channels connected to the ocean. Over time it is believed they fixed themselves to the floor in the shallow canals of the underground waterways and became secondarily infected by the t-Virus.

Although most Ascidians are characterised by a tough outer shell made of polysaccharide cellulose, this was severely necrotised by the t-Virus thanks to a breakdown of cells. The creature reproduced asexually and rapidly proliferated small offspring christened by observing researchers as ‘Torpedo Kids’ thanks to the rapid way they glided through the water. The Torpedo Kids possessed an almost human-looking face and they were fiercely protective of the mother creature. Their body tissue was so fragile that they burst easily upon contact and spray out a strong acidic fluid. In contrast the Nautilus was completely immobile and if exposed was extremely vulnerable.