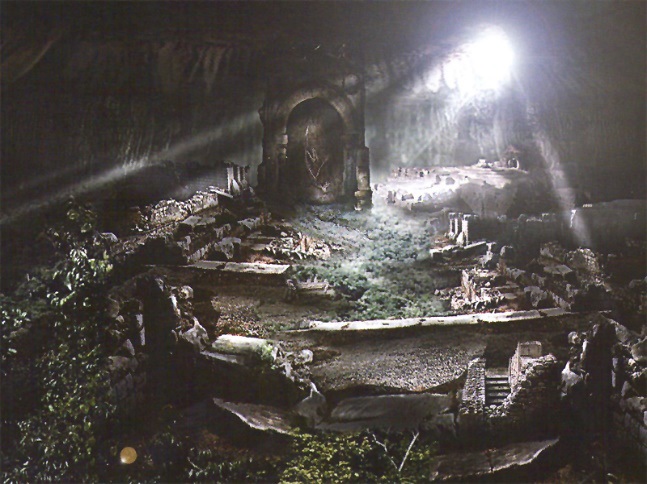 The city has only one main entrance, partially submerged and accessible only by boat. A singular tunnel leads down to the main complex where occasional shafts of sunlight pierce through from small cracks in the roof. Terrain underfoot is uneven and difficult to walk on. Further down the tunnel opens up into a larger shaft with a wooden bridge crossing over a large chasm and primitive wooden beams erected to prevent anyone falling to an untimely death. Rivers and lakes are situated on the mountains above and numerous waterfalls run down from cracks and recesses in the rock foundations, cascading further down into the darkness hundreds of feet below the earth. Wooden poles and sticks thrust into the ground are decorated with skeletons and skulls of the deceased to serve as a warning to any wandering travellers that made it this far.

Tribal masks depicting angry gods act as further deterrents to ward off intruders from venturing any further down. Although the Ndipaya were primarily peaceful, they are also stout warriors and when the need for war arises, their physical prowess make them feared across the land. This adaptability is the essence of the Ndipaya.

This tunnel runs further still, ending at a beautiful, ornate door carved from solid rock. This entrance is decorated with carvings depicting the sacred flower and is firm enough to ensure no one uninvited can pass. Beyond lays the sacred kingdom which is a sight to behold; a true marvel of architectural genius crafted and constructed using advanced tools and meticulous design. High above the ground is an oval concourse flanked by stone pillars encircling the entire settlement. The city is ingeniously powered by sunlight harnessed from above through reflective prisms and mirrors, creating a natural power plant that ignites at various intervals thanks to the control of heat and fire; humanity’s first true piece of technology. A city designed this ingeniously requires a major energy source to function, and light from the sun was just that. The religious beliefs of the Ndipaya equate this gift of energy as one from the gods. A larger prism is installed above a temple, catching sunlight streaming down from above and reflecting off mirrors placed at precise locations using perfect mathematical calculation to flood this underground kingdom with natural light and heat.

Below the concourse is the village and living settlement, made up of huts and stone buildings constructed out of the cavernous rock. A massive waterfall flows behind, providing a constant fresh water supply to aid sustenance and a number of canals ensure maximum circulation across the city. Special preserved structures contain sarcophagi and coffins making up part of a burial ground. Some of the dead are buried alongside special treasures such as topaz or emerald, and their final resting places adjoined with tapestry and old battle dress.

Beyond the small village area is the labyrinth. This place is laced with many booby traps and obstacles for a dual purpose. It ensures those unworthy could not reach the sacred worship area and secondly it marks the beginning of the trial area for the process of choosing the next king. Those who survive this dangerous obstacle course reach the next stage and the privileged opportunity to consume the Stairway to the Sun flower. An X-shaped corridor leads to an arena and beyond that is the door to the main labyrinth. This first section is a long, twisting corridor flanked by statues of the ancient gods on either side. A trap is installed around a stone slab set into the floor and anyone foolish enough to trigger it activates a mechanism causing the statues to topple over one by one and crush anyone in their path. Only those with quick enough reflexes would make it through this point. Beyond this corridor is an complex mechanism involving the simultaneous activation of two bell-pull ropes which bring down a set of stone steps leading to the final phase of the labyrinth. This is a beautiful, open-planned arena area dominated by an ornately carved staircase. In each corner of the arena is a different coloured god statue with a rope that needs to be pulled in sequential order. With each successful activation, the central staircase will raise and fall, permitting access to the next one.

Once all the gods are activated, the next area became accessible. But in order to gain access to the inner sanctum of the royal city, one has to navigate through the worship area protected by a puzzle lock requiring three emblems of earth, sun and sky to unlock. These emblems are attached to totem poles scattered across the labyrinth and guarding the maze-like walkways to get to them is an ingeniously designed laser-targeting system. This device is powered using mirrors and glass to harness heat and light from the sun, converted into high-temperature beams of raw energy powerful enough to vaporise anyone in the way. Once all emblems are successfully slotted into place, access to the entrance of the fabled worship area is permitted.

This sacred place can be navigated only by those with unmatched strength and intelligence. The underground structure has numerous traps operated by natural sunlight and is difficult to duplicate even with modern technology. It was built by the ancient king and used to select his successor. This is a dangerous testing area fatal to anyone without strong body and mind to see through all the secrets hidden deep beneath this holy ground. It is a trial of champions.

The main door to the worship area is decorated with an ancient mural depicting an Ndipayan youth worshipping the sacred flowers. Through this door are steps leading down to a stone elevator platform which can descend four levels down thanks to an intricate rope and pulley system. This area is protected by more heated energy beams thanks to trapped high intensity light from the mirrors. This is the uppermost area of a pyramid descending all the way down to the Sun Garden at the bottom. When the lasers are activated, several mirrors need to be carefully aligned for the elevator to activate. On the third level down, a door on either side of the chamber leads to hidden tombs. One contains an ever-burning altar and the other a treasure trove acting as a lure for would be thieves and protected by a spear trap. A third chamber contains a hidden treasure room where the Ndipaya store their riches and many fine jewels and treasures line these four walls. Sacred idols here show the Ndipaya not only worshipped the movements of the sun but also the various phases of the moon. This room is also decorated with preserved tribal masks belonging to long-dead influential figures of Ndipaya history. The fourth and final level down is the sacred Sun Garden area where the Stairway to the Sun plants flourished. Beyond that are more ruins before finally arriving at the monarch room where the holy king, the Progenitor Human, would sit. The stones of this whole structure is made with care, illustrating the advanced architectural techniques of its creators. Natural sunlight harnessed from above lights up a city of mystery structures that thrive as a whole community. This place has been here for a very long time, perhaps even as far back as prehistoric times. In the present day, the Ndipaya kingdom is a largely abandoned city of ruins – or a better term might be holy ground; a secret holy ground protected for generations by a king.