Neil Fisher was the head of TerraSave and blessed with a calm judgement and keen insight. He had the complete trust of those working under him and was a veteran, with many rumours circulating he had overcome many obstacles to reach his position and witnessed much bloodshed. He liked to keep himself in shape and was a fast runner he put down to gym membership. He also caught the eye of Claire Redfield but there was never anything other than a professional relationship between them.

Fisher was very outspoken against the evils of bioterrorism and a strong supporter of the F.B.C. following its inauguration in 2001. His position in TerraSave enabled him to build up a number of contacts within the Global
Pharmaceutical Consortium and through this he came into contact with Morgan Lansdale. Together they built up a strong rapport and Fisher agreed with Lansdale’s assessment that the fall of Umbrella would not halt the spread of bioterrorism. 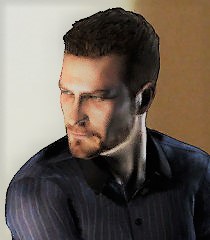 He voted in favour of a power-increase for the F.B.C. to protect America from all foreign and domestic bioterrorism threats and as their relationship continued to be mutually beneficial, Lansdale eventually took him on as an apprentice and counted him amongst his most trusted associates. Lansdale would continue to confide in Fisher and build him up as his protégé in years to come, referring to him as his ‘right-hand man’.

In 2004, Fisher and TerraSave were involved in the infamous Terragrigia Panic and Fisher rescued a three year-old girl named Natalia Korda following the deaths of her parents. He felt incredibly sorry for her loss and bought her a teddy bear she named Lottie. Natalia was forever grateful to Fisher and always referred to him as the ‘nice guy from Terra-saver.’ He looked through her post-incident interview transcripts and was surprised to find she had described the ultra-violet radiation that destroyed the city as ‘pretty.’ He ensured Natalia was placed into a special TerraSave facility where she would be educated and her every need catered for.

Fisher also knew of the hidden truth behind Terragrigia when Lansdale confided in him over his secret collusion with Jack Norman and Veltro. Although all-powerful, Lansdale admitted he was fearful of things, even little things and had an absolute obsession with cleaning up every last imperfection. Although he had meticulously planned the Terragrigia Panic down to the minutest detail, he still harboured a secret fear that one day the truth may be revealed and he would fall from power. He told Fisher the truth in order to create a contingency plan should the worst happen. Fisher would continue his legacy and ensure the F.B.C. would remain all-powerful. Despite his position at TerraSave, Fisher agreed with Lansdale’s hard-line stance that the Panic was done to show the ignorant global leaders that bioterrorism was a still a very real threat. He understood that the innocent lives sacrificed during the incident would save hundreds of thousands more in the years to come when the F.B.C. grew in stature and expanded their power base even further. This stance seemed justified when Terragrigia was the first incident to definitively reveal the existence of B.O.W.s to the public following years of rumour and speculation. As a result, the F.B.C. had its charter expanded further.

A year later however, Lansdale was exposed by the B.S.A.A. and he was summarily arrested for his crimes. But he was smart enough to pass the torch before he went down and Fisher was ready to inherit his legacy and continue his work. The F.B.C. was soon closed down but Fisher made it his goal to resurrect them. The world needed an organisation ready to take hard-line and positive action against bioterrorists rather than the more conservative tactics the B.S.A.A. employed. Biding his time, he continued his work at TerraSave and worked to disrupt WilPharma’s rise in Harvardville by ordering the disclosure of their illegal human trials in India to be plastered all over the front page of TerraSave’s website. He also gave the go-ahead for a peaceful protest to be carried out at the town’s main airport to campaign against local Senator and WilPharma stock-holder Ron Davis.

In 2009, Fisher took a contingent of TerraSave workers to Kijuju in Africa to supply aid to those who survived the Las Plagas outbreak. Whilst assessing the aftermath over the next few years he became greatly interested in all the speculation and scrutiny that befell Tricell Inc. The authorities took a hard-line stance on the corporation and would not allow another Umbrella to linger on. But the threat of the Uroboros Virus was very real and bioterrorism was becoming so commonplace it was changing the very balance of the world. Fisher believed this kind of madness would only endlessly repeat itself until nothing would be left over but tragedy and despair. But he also saw Uroboros as an opportunity to stage the kind of incident that would justify the resurrection of a hard-hitting organisation like the F.B.C. He wished to obtain a sample of the virus and unleash it across a large American population centre to prove to congress such a domestic anti-bioterror agency was needed and to fulfil the wish of what Lansdale had tried to do seven years earlier.

In early 2011, the U.S. Congress were due to hold a hearing on the dangers posed by Uroboros and Fisher viewed this as the perfect time to launch an attack using the very weapon the eyes of the world were on. Through the B.O.W. underworld, he made enquires about the virus which brought him to the attention of Alex Wesker. At that time she was performing t-Phobos trials to determine the perfect vessel for an audacious mind-transfer ceremony as her own body was riddled with disease. She needed subjects that were fearless and was looking for people who had survived the horrors of biological weaponry and overcome their worst fears. She made a deal with Fisher to supply him with an Uroboros sample in exchange for individuals from TerraSave with a strong tolerance to fear. Fisher chose ten candidates he believed most suitable based on their first hand experiences with bioterrorism but only six of them passed the psychological evaluations.

To boost the numbers, he also added himself to the list and brought in Natalia Korda due to her experiences in Terragrigia and her subsequent interviews which led him to the conclusion she had overcome the emotion of fear. He kept his list of candidates in a binder that bore the logo of a ‘Silver Fox’, though none of his colleagues knew its inner meaning. He arranged a staged abduction of his employees during a TerraSave party to welcome new members. Natalia had already been taken and the remaining six were captured, incapacitated and taken to the forgotten island in the Baltic Sea.

Fisher awoke sometime later in a forest alongside Gabriel Chavez, Pedro Fernandez and Edward Thompson. They had all been injected with the t-Phobos virus and wore sensor bracelets to monitor their fear levels. But although the others were in panic, his prior knowledge of what was happening meant he was able to keep his fear levels down when they encountered the Afflicted roaming the island. He later aided Claire Redfield and Moira Burton at the abandoned fishing village and led them to the main factory town by the fishing village. After becoming separated, Fisher reported to Wesker’s aide; Stuart, with his conclusions and cited Natalia was the best candidate. He quickly returned to the field and captured Natalia. Stuart agreed with Neil’s assessment and the final preparations were made to isolate Natalia whilst the trials were cancelled and the remaining survivors were thought to have been killed in a factory explosion.

He wrote a letter to his compatriots, stating that the time had come to execute his plan and that the world needed someone to lead them through the dark times. People labelled Lansdale a villain for what he did in Terragrigia but in reality he was the hero trying to save them all. He was the only one to realise that sacrifices were needed and that something good could be built on them. Although Fisher felt excessive guilt at betraying his friends in TerraSave, he was prepared to deal with the devil herself in order to realise Lansdale’s vision.

However, Fisher was betrayed by Alex who shot him in the neck with an Uroboros sample as her way of fulfilling her side of the bargain. She knew all about his secret plans to revive the F.B.C. and dismissed its utter lunacy. Fisher soon violently mutated and developed a strong urge to kill. He possessed genes boundlessly close to an adaptive individual and was able to supress the propagation of the viral cysts and maintain a near human form. Fisher revelled in his transformation and admitted the aim of resurrecting the F.B.C. was an illusion to conceal his true vision of dominating the world through the power of fear. He truly believed that was the only way to save the world. He tracked down and attacked Claire Redfield, but was eventually killed by Moira. Just before he died, he apologised to Claire and insisted he only did what he thought was right.