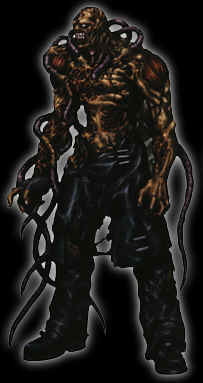 The Nemesis T-Type was a product created exclusively by Umbrella Europe to capitalise on the success the American branch had with the Tyrant Program. Because the Americans had already developed the ideal Tyrant specimen with the T-103 in terms of physicality and performance, the goal of Umbrella Europe was not just improve the Tyrant, but create a whole new life form that could be implanted into it, taking full control over motor functions, decision-making,and raising intelligence levels far beyond any level thought possible. The genesis behind the ‘Pursuer’ came shortly after the mansion incident when Umbrella scientists carefully scrutinised all data recovered by the Red Queen AI.

Their overwhelming conclusion was that most B.O.W.s created with the t-Virus lacked the necessary intelligence levels required to suitably follow orders in combat and therefore were inefficient to be sold as products. In addition, the inability to control the Tyrant was worrying and improvements needed to be made if the hugely expensive Level 3 human biological weapon program was to be a success. The Americans applied several control improvements to the T-103 before it underwent mass-production through cloning on Sheena Island, but the Europeans wanted to take this one step further and were concerned about how powerful Umbrella USA was becoming, especially as the executive board had financially backed the Tyrant plan over the Nemesis plan.

They began experimenting with organic parasites and this led back to a project the European 6th Lab had been working on since 1988; the Nemesis parasite. Named after the Greek Goddess of revenge, Nemesis was a suitable name to motivate the European branch to create a weapon capable of hunting down and defeating the very people who had defeated the American-made Tyrant at the mansion. It was all part of an intense power struggle brewing between these two powerful branches of Umbrella following that incident at Arklay. Hence the name of this new creature was to be Nemesis T-Type and nicknamed the ‘Pursuer’.

The NE-α parasite had been in development for ten years and an early prototype was injected into Lisa Trevor in 1988 which led to the discovery of the G-Virus. However, development of the parasite was slow-going for it was so powerful it killed all of its hosts within 5 minutes of insertion. Lisa Trevor was the only subject who survived thanks to her unusual survival ability from numerous experiments with the Progenitor Virus. But following a decade of refinement the parasite was now more or less perfected. NE- α was implanted into the spinal cord of a mass-produced T-103 at a cellular level. Over time, the parasite would absorb the t-Virus cells within the body and grow, spreading throughout the Tyrant’s entire system and eventually forming a unique brain near the medulla oblongata. At the same time, it eroded the central nervous system and destroyed the host’s frontal lobe, modifying the neural network to link its own brain with the remaining brain functions of the host. Once this was complete, the Tyrant’s entire thought process would be left in the hands of the Nemesis, and its actions could be controlled completely from the outside.

Whilst the NE- α parasite on its own wasn’t overly intelligent, it had the ability to boost its intellect by simultaneously using its own brain as well as the host’s brain. The parasite also secreted a cell activation composition which transformed the human-esque Tyrant into something more akin to a monster with a unique and creepy appearance. For part of the cultivation process, a special compound known as VT-J98 was required and was speculated to be a stabilising agent.

The new-found intelligence levels of Nemesis allowed the subject to make its own decisions without the need for constant direction and be trained to operate complex weaponry; a concept that was impossible before. This arsenal included a large Gatling gun and a specially-designed rocket launcher that was too large and too heavy for a normal human to carry. To protect it from harm, the Nemesis T-Type was also equipped with a specially made artificial power limiter similar to that worn by the T-103’s. This was in the form of a highly durable protective coat that was both bullet proof and blast proof. In addition it also acted as a kind of straight jacket as a fail-safe to prevent the Nemesis from going out of control.

Thanks to the unique secretions of the parasite, the Nemesis had regenerative powers far beyond that of any other B.O.W. or Tyrant. These same secretions are what altered the body composition to give the creature such a unique look. However, injuries or damage that required regeneration came at a heavy price, resulting in strange and awkward-looking mutations in its body. To aid its regenerative capabilities, the Nemesis in its weakened state would feed on other creatures infected with the t-Virus, allowing the parasite access to a fresh supply of t-Virus cells to absorb and grow.

Several models of the Nemesis were developed at the European 6th Laboratory and during final testing one of the subjects gained a sense of self-awareness and attempted to escape from the facility with others. This proved beyond all doubt to the research team that the intelligence levels of the B.O.W. had been vastly improved. Specimen ‘T02’ was programmed with orders to eliminate all S.T.A.R.S. members and was deployed during the Raccoon City incident.

NEMESIS FIRST FORM: – When deployed for combat it stood at over 7 feet tall and was dressed in a protective overcoat and combat boots. It was equipped with a rocket launcher or a Gatling Gun depending on the situation it had to face. Its intelligence levels were superior to any other Tyrant and had the ability to think freely and carry out complex commands. It was also able to infect its victims with the t-Virus, specifically a more potent variant that incubated within its own body. Although its coat was bulletproof, it could still be damaged by excessive fire and the power limiter would engage caution mode. Although there was no significant change in appearance, this defence system allowed for the creature to use parts of its semi-visible tentacles as a weapon. When in caution mode, the tentacles produced a liquid compound which affected the nervous system of the victim, restricting their movement.

NEMESIS SECOND FORM: – When damaged and forced to regenerate, the Nemesis began to mutate, secreting a fluid that sped up the reaction of its cells. The tentacles which were only partially visible in its first form, now began to develop at an alarming rate and loosened up, flowing more freely than normal. Because half its power limiter has been destroyed, the t-Virus mutation is not kept fully in control, meaning the tentacles enlarge and naturally become more aggressive. The body of the creature also swelled as the parasite became larger and tried to adapt to the critical situation of its injuries. When it this form it became more aggressive and boasted even greater attack capabilities than its first form. The growing tentacles also took over the creature’s arms meaning it no longer had the ability to wield its firearms. Instead it employed its tentacles in whip-like attacks on its targets.

NEMESIS THIRD FORM: – Although the Nemesis had the ability to overcome the intelligence-decreasing secondary effects of the t-Virus, it couldn’t overcome the destabilising effects. Once its Tyrant-shared brain was destroyed, it activated its defensive instincts and underwent another major mutation. This process caused the Nemesis to lose its head and to compensate the parasite developed a protective organ for predation and absorption. The cells from the two creatures began opposing one another for control and the mutations kept on happening until the creature reached a massive size. As its brain continued to work to protect its predatory abilities, it eventually mutated into a giant, all-consuming digestive organ. Large pustules full of a strong, acidic compound formed all over its back and by now it had lost all resemblance to its original form. Giant bone protrusions stuck out from its chest cavity and it spewed poison all around itself. Although its intelligence had diminished rapidly, it still tried to carry out its directive of hunting down S.T.A.R.S. members and its main purpose was to hunt for prey. Its damaged limbs were substituted for yet more abnormal growth of tentacles.