Holding the rank of Sergeant in Unit B of U.B.C.S. Platoon D, Nicholai was originally from Moscow where he served in the Russian army. Before the fall of the Soviet Union he was a member of the well-known Spetznaz special unit, with whom he developed a unique set of skills in relation to firearms and close-quarters combat. Over the years he completed and survived several top secret missions and during the Cold War he took part in a number of political assassinations and insurgency operations. But due to the secretive nature of these missions, much of his history is shrouded in mystery. 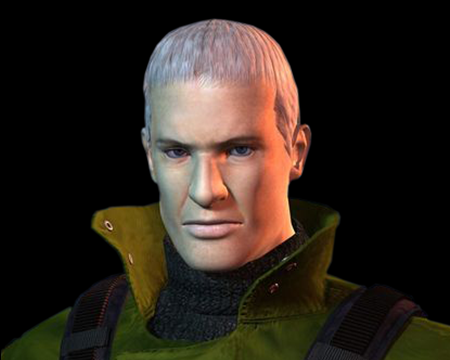 Nicholai was a cold and calculated individual and his time with the Spetznaz only heightened this emotionless weapon. When the Soviet Union collapsed, Nicholai lost all sense of patriotism and concerned himself only with money and personal gain, taking an anarchic view on life. He joined Umbrella Corporation who provided him with opportunities to exploit his skills. He had no interest in loyalty or corporate promotion and would happily betray those around him to suit his own needs. He would do anything to ensure a more profitable bonus.

His comerades gave him the nick name ‘Silver Fox’ due to his close-cropped silver hair and he was great friends with Sergei Vladimir due to their shared experiences in the Russian Military and mutual outlook on life. Nicholai brought Sergei to Umbrella in 1991 and persuaded him to relinquish his ten clones for t-Virus research in exchange for an executive position within the company. Sergei’s rise in Umbrella only benefitted Nicholai. He was enlisted in the U.B.C.S. and made a member of ‘Monitor’; an internal espionage group designed to monitor suspicious company employees and activities. His skills as a lone soldier were second to none. Throughout his career Nikolai had fought in cities and forests, had experience in placing and disarming traps, an extensive knowledge of first aid and was fluent in several foreign languages. His exceptional mission survival ratio ensured he was U.S.S. Alpha Team leader Hunk’s only real rival and there was a certain animosity between the pair. He could find his way around any type of battlefield and his survival skills earned him a questionable reputation amongst his comrades. But his integrity as a soldier remained completely immaculate and his skills were often recognised by those high up in Umbrella. However, in secret there was always growing criticism among his own unit with regard to his survival rate, and he was not very well liked by his own people.

During the private rescue operations in Raccoon City, Nicholai was entrusted with a number of secret duties in his role as Supervisor/Monitor. Umbrella’s true aim was to recover battle and medical data for the B.O.W.s under development at that time, and Nicholai was the first of many ordered to retrieve it for them. He was part of a special unit known as ‘Bravo 16’, identifying the 16 trusted individuals operating in Raccoon City with these hidden agendas.

Later in the outbreak he menaced Jill Valentine and Carlos Oliveria, although distanced himself from Jill by faking his death so he would avoid the Nemesis T-Type. He also began to chase down and kill any remaining Monitors in the city so he could demand a bigger bonus from Umbrella upon his return. He shot Tyrell Patrick who was later killed when a booby-trapped wall safe triggered an explosion. Nicholai then destroyed the hospital completely before moving through Raccoon Park and encountering Jill once again. After narrowly avoiding the Gravedigger, he rendezvoused with a U.B.C.S. squad to carry out ‘Operation Emperor’s Mushroom’ at Raccoon University. He tried but failed to acquire a blood sample from the Thanatos Tyrant but was successful in assassinating rogue Umbrella scientist Greg Mueller and destroying the complex. With time running out, Nicholai headed to the P-12A Incinerator Facility and stole the last remaining helicopter, fleeing the city before the U.S. Government executed the sterilisation operation.

What became of Nicholai after Raccoon City has never been revealed although he may have written a report on the destruction of Raccoon City after escaping the city.