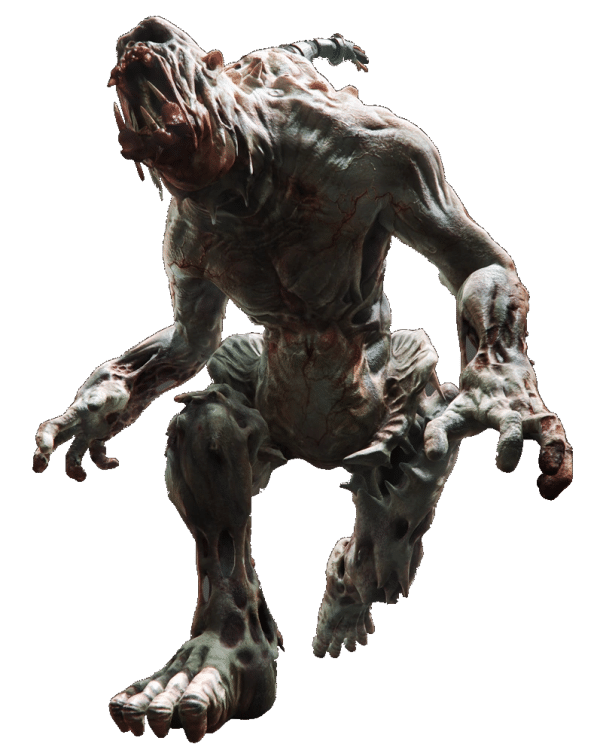 This was an experimental Complete Mutation Species that stood over 30 feet tall, making it one of the largest B.O.W.s ever created. It was developed as a weapon of destruction and is capable of laying waste to everything around it using its exceptional strength. Because brute force was the objective, this CMS possessed only the minimum amount of intelligence required to stay alive whilst causing as much disruption and damage as possible. If under attack it would sense a danger to its life and retreat from the area, but it was unable to carry out complex objectives and commands.

Ogroman was designed to gain control of the front lines during a conflict and several specimens were sold to the rebels by Neo-Umbrella during the Edonian Civil War. Anti-government forces deployed these weapons out of desperation, despite them still not being fully developed. Ogroman is humanoid in appearance, but its insides are all transforming into insect parts. Exposing these insect organs means exposing its weak points. Their skin is also under-developed, leaving white, gelatinous flesh with numerous holes and lesions throughout. Also, because these specimens had just been born, they were still in an incomplete state, without eyes or teeth. Its flesh is weak in places, exposing the outline of an overdeveloped bone structure and this hardened shell allow it to withstand blasts from even heavy artillery.

Ogromans were deployed into hot zones using helicopters and whilst deactivated the creature adopts a fetal position like a new-born baby. They are dropped from helicopters using a plug-like protrusion on its back. Once deployed the plug remains and is decidedly weaker compared to its hard skin. With minimal intelligence, they act in similar manner to El Gigante B.O.W.s and will only act on the orders they are given without any thought or hesitation. They will stomp with their feet and can pick up and throw armoured vehicles with ease. However, these creatures can be easily brought down if enough firepower is concentrated on the life-support system attached to its back. The urgency of the situation at the time left the Edonian Liberation Army no choice but to allow this easily-exploited vulnerability go unremedied. When killed the creature boils from the inside and its back will split open causing it to dissolve into a pile of slush. In addition to Edonia, an Ogroman was also used by Neo-Umbrella to defend the C-Virus missile launch on an aircraft carrier in Lanshiang. Its name comes from the Serbian word for ‘gigantic’.