Parker was an Italian of English descent who joined the global fight against bioterrorism by enlisting with the F.B.C. under the command of Morgan Lansdale. He was known for his uncompromising dedication to his duty and while he often seemed composed most of the time, his hot-blooded nature often revealed a sincere, awkward streak that was difficult not to love. Some of his colleagues believed him to be quite cynical and stubborn in his ways whilst others believed him to be a trustworthy and caring person. He was a heavily built man with a trademark shaggy and unkempt appearance. He also had a tattoo of an anchor on his upper left arm.

Whilst working for the F.B.C. he was partnered with Jessica Sherawat who admired his determination to duty yet also believed him to be clumsy. She disliked his stubbornness and how he never listened to reason, but on the surface they worked together well. In 2004 they were both deployed to the megafloat city of Terragrigia following the bioterrorist attack carried out by Il Veltro using the new t-Abyss virus. 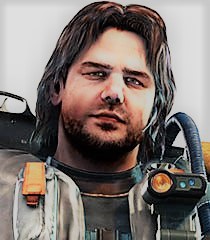 After fighting for three whole weeks, the tower at the heart of the city and where the F.B.C. had been using as its headquarters, was overrun with Hunters and the order was given to evacuate. Parker and Jessica fought their way through the infested building to try and reach the command centre. On route, they came across an injured rookie Parker recognised as Raymond Vester. After finding a tourniquet to bandage him up, the three managed to make it to the command room and met up with General Lansdale. There they discovered he was planning to wipe out Terragrigia using the satellite energy matrix ‘Regia Solis.’ They also witnessed a heated argument between Lansdale and B.S.A.A. Director, Clive O’Brian before Parker and Jessica were ordered to get to the roof to evacuate. Whilst battling Hunters on the way up, they both found themselves agreeing with O’Brian’s strong views. Both agents made it to the roof and evacuated via helicopter, watching as Terragrigia was scorched from above and vaporised all the infected below. These images deeply affected Parker and in the following weeks and months found himself wondering if Morgan’s use of the satellite was more to cover up the F.B.C.’S incompetent handling of the situation rather than to destroy the biohazard. He began to get depressed and found solace in alcohol. Unable to shake the guilt, parker resigned from the F.B.C. and transferred across to the B.S.A.A. which at that time was still just an NGO. Their powers and influence were severely restricted compared to the F.B.C. but the move proved to be the right one for Parker and he at last felt like he was fighting on the right side. Jessica Sherawat also moved across with him.

Roughly a year later, Parker found himself working with Jill Valentine when they were called to the beach of a small Mediterranean coastal town by Director O’Brian to conduct an investigation into some strange washed-up carcasses. Although they didn’t know at the time, Parker and Jill were being set up by O’Brian in an elaborate and risky plan to bring down Morgan Lansdale, whom O’Brian suspected of being corrupt. O’Brian couldn’t reveal his plan to either of them as he knew the B.S.A.A. had been infiltrated by a spy and he had to trust that Parker and Jill’s natural survival skills would see them through unharmed. O’Brian’s plan took them to the Queen Zenobia cruise ship to investigate a fake S.O.S. call supposedly sent out by Chris Redfield and Jessica Sherawat. However, they were both up in the Finnish mountains at the time looking for an airport apparently being used by the resurrected Veltro terrorist group. But this base was a fake and also part of O’Brian’s risky strategy.

On the ship, Parker found the crew to be dead and reanimated as ‘Ooze’, due to t-Abyss infection. They also found ‘Chris’ but he turned out to be just a mannequin and they were both captured by ‘Veltro’ who was in fact Raymond Vester, secretly playing the part. Although Vester was still working with the F.B.C., he was also working with O’Brian the whole time to expose Lansdale. This whole Veltro revival act was their doing.

After escaping, Parker and Jill fought through the Queen Zenobia to try and re-establish communications with headquarters. They were eventually joined on the ship by Chris and Jessica and Vester was unmasked as Veltro after Jessica shot him. However, Vester feigned death and whispered to Parker that Jessica was the spy. Parker confronted Jessica on the bridge as she tried to activate the self-destruct system but he was too good-natured about their past together and lowered his guard, hesitating enough for her to shoot him in the leg. As the ship counted down to destruction, Parker tried to escape and was helped by Chris and Jill, but after a bridge collapsed and he was left hanging, Parker fell down into the flames below. Although thought dead, Parker actually landed in water and the fire was caused by burning fuel on the surface. He was later found by Vester who saved his life in return for Parker saving him one year earlier in Terragrigia. After the Zenobia incident, Parker was found washed ashore in the Republic of Malta. He spent a month recuperating from his injuries before returning to duty at B.S.A.A. Headquarters.

Parker continued to serve the B.S.A.A. faithfully for many years and eventually transferred over to the South American branch. In 2014, he answered a request from Chris Redfield to assist his sister Claire on Sonido de Tortuga Island, and led an armed unit to rescue survivors from TerraSave and the Idol Survival production team. Parker arrived in the midst of a driving rainstorm and dropped Claire off before his team engaged and incapacitated the Schraube Dämon; a terrifying new B.O.W. created by former Umbrella researcher Dirk Miller as part of the classified Kodoku project. They were then attacked by a harpoon-wielding monster known as ‘Subject 001193’ and Parker handed Claire a map of the old Umbrella facility before taking a stand against the creature to allow the others to escape. The B.S.A.A. unit were all butchered and Parker himself was badly wounded in the battle. He was only saved at the last moment when the Schraube Dämon, who had escaped its capture, instinctively attacked the Subject 001193. Parker lost consciousness shortly afterwards from blood loss. When he awoke, he directed the B.S.A.A. relief team to Claire Redfield’s location. He was picked up and they evacuated the remaining survivors from the island.