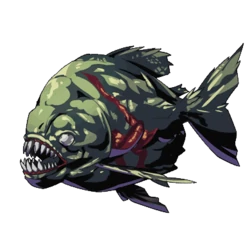 These creatures were originally not a purpose-made B.O.W. but instead injected purely as an experiment. They were initially bred as fighting fish before being injected in a controlled environment which led to a growth spurt and increased aggression. Their skin badly decayed and left them with a sinuous-veiny affliction across their skin with small tumour-like growths. As a result of virus infection the Piranhas gained the ability to survive out of the water for a short period of time and could leap out and launch an attack once they found other creatures passing by. They hunted in packs and demonstrated phenomenal speed to glide across the surface of the water and attack with a heightened ferociousness.

Because of their terrifying attack power, the Piranhas were used to execute traitors within the Sacred Snakes organisation. In 2002 Javier Hidalgo purposefully flooded the entire town of Mixcoatl and dozens of infected Piranha came in through the water. They were one of the main catalysts for the village’s complete destruction.