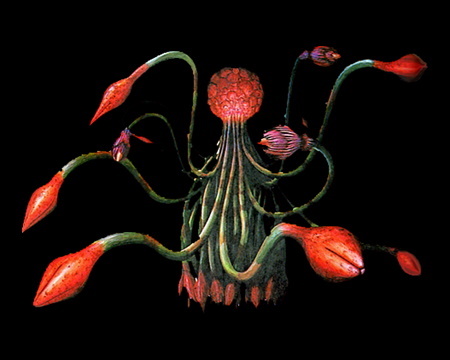 Plant 42 was created accidentally after the t-Virus outbreak at the Arklay Labs in May 1998. It was first infected by researchers as part of a controlled experiment, but suffered further secondary exposure following the facility-wide biohazard outbreak. The virus had a substantial effect on the plant, causing it to grow to such a size that it easily overwhelmed other infected plants in the area. Its name came from its growth location of ‘Observation Point 42’ and after only a short time its sheer mass caused it to break through the walls and door of the Guardhouse. Its roots penetrated all the way down to the submerged Aqua Ring and it was able to absorb chemical compounds from the water. The main bulb of Plant 42 fused itself with the ceiling of the guest room and sprouted several tentacle-like appendages utilised as a defence mechanism. These vines had small spiked bulbs on the end and were used to bash away any potential threat. These bulbs and petals could also secrete corrosive fluids lethal to any organism.

The plant was extremely aggressive and if a human being got too close the tentacle would wrap itself around its prey, squeezing it tight and rendering it helpless as Plant 42 used its suckers to drain the veins dry of blood. This was the primary way it gathered nutrients to supplement its extreme mass. But as well as its dramatic size increase, the most profound effect the t-Virus had on Plant 42 was an extraordinary increase in intelligence. Researchers noted the plant had turned to predation and attacked humans with its blood-sucking tendrils in order to preserve its own life. When it had prey trapped in the room, it used its vines to block the door to prevent any escape. It had also been known to do this when it was sleeping as an excellent defence mechanism and researchers had to conclude that the plant was acting on its own judgement.

Because of this curious and developed behaviour, the science team were at a loss to determine what species of plant the organism was before infection, suggesting it was some type of insectivorous classification. Although Plant 42 was highly evolved, it was unable to move its trunk, foregoing all mobility to function with marginal energy production focused on photosynthesis. When under attack, it closed its five large petals around the main bulb as a shield to protect it. However, like all plants, it was extremely susceptible to fire. Its roots were also unprotected and they could be killed when a special chemical known as ‘V Jolt’ was applied.

Following the acquisition of Plant 42’s research data during the mansion incident, this research was used to develop the Plant 43 – ‘Ivy’ B.O.W.