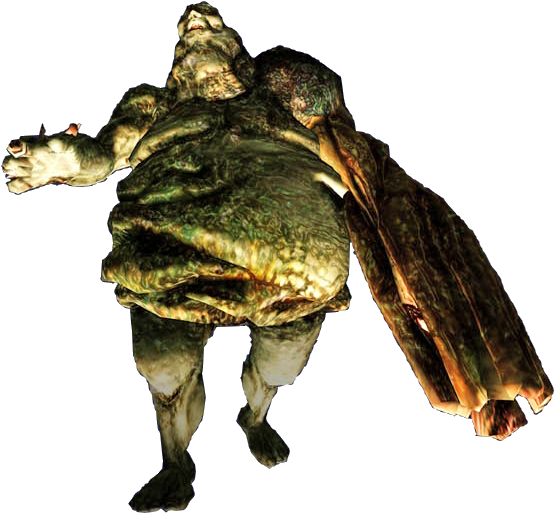 Pluto was a human-based experiment designed to create a weapon able to function without the aid of vision. The test subject was a condemned criminal who was originally lobotomised to make initial control a lot easier and a metal rod was hammered into his frontal lobe to alleviate pain stimuli. The administration of powerful steroids alongside a mutant t-Virus strain made the subject rapidly increase in size. But the constant injections caused the increased abnormal development of muscle fibres to turn into fat, leaving the subject obese. Its eyes were removed early on in the procedure and after a while it began to develop an extremely evolved sense of hearing to the point where it could track an external sound’s exact point of origin and its own distance away from that sound.

The application of several different t-Virus strains had left Pluto severely deformed, with much of his skin tissue developing green patch-like growths and his right arm becoming essentially a large club. The green growths on its chest were similar in appearance to the unique effect of the t-Virus upon Albert Lester at the old abandoned hospital in Raccoon Forest. They served as an extra layer of ‘natural’ armour plating gave Pluto an extra resilience against standard firearms.

Pluto was extremely aggressive and used its heightened sense of hearing to stalk its prey. Once locked on, he would charge at its target, using its large body mass as a battering ram. Despite its large bulk, the creature was surprisingly agile, although the loud stomps and strange gurgling sound it made ruled out the possibility of using it as an infiltration device. The numerous procedures performed on the subject’s brain had also left its skull exposed, which was a fundamental weak point. If silenced weapons were employed against it, Pluto would have no defence and be useless in any potential combat. The only pleasing thing about Pluto was its determination to hold onto a target once it had initially located it. Even if the prey were to remain as silent as a mouse, it was extremely difficult to elude Pluto once it had initially discovered them. But in the end, Pluto did not meet the required standard for a marketable B.O.W. and a decision was taken by researchers to dispose of.

However, at some point it escaped and went on a rampage, killing five researchers in the process before it was eventually recaptured. When the Waste Disposal Facility was closed down in 1998, Pluto had free reign of the facility and spent its days wandering the dark and abandoned corridors, searching for its prey. It was eventually encountered by Bruce McGivern in 2002 and killed.