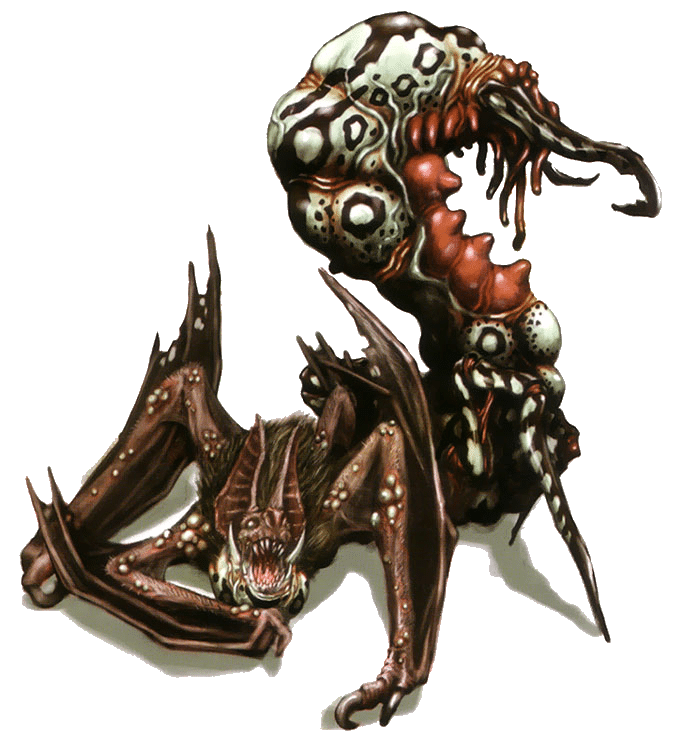 Tricell created this creature by implanting the Plaga into a bat and undergoing a program of extensive genetic remodelling thanks to the base organism’s symbiosis with the parasite. The aim was to create a combat B.O.W. effective both in air and on land. In Swahili, ‘popo’ means ‘bat,’ and ‘karimu’ means ‘generous.’ The creature’s flexible tail is the Plaga body itself, covered by a tough, fire-arm resistant carapace similar in nature to the Duvalia.

However the soft interior of the tail is vulnerable, but even on the ground it is clever enough to keep it hidden away from would-be attackers. It scuttles along using its two legs and its wings to increase the number of limbs to four. For its own attacks, it uses the glistening talons at the end of its four limbs, as well as blows from its own body. The Popokarimu can also shoot a sticky substance from its tail to immobilise its prey. The creature’s ability to switch rapidly between ground and flight make it truly an enemy to be feared. It has enhanced strength and its enlarged wings can support its massive bulk with ease. It is fast and agile whilst in the air and capable of dangerous swooping attacks. It is also extremely resilient and is able to survive a fall from a great distance. The Popokarimu will announce its presence with a signature screeching-noise.

Only one specimen was produced, but instead of its intended sale to a group of American buyers, it was unleashed by a desperate Irving on his pursuers Chris Redfield and Sheva Alomar.