Graham, first name unknown was a former President of the United States and father to Ashley Graham. Graham inherited a troubled America following the resignation of his predecessor after the destruction of Raccoon City. He was however an industrious individual and presided over a period of relative calm in terms of international terrorism. Through the Raccoon City trials, Umbrella was dissolved under his book.

Despite this however, through his position, he came to learn of the US Government’s own involvement with biological weapons and being a key customer of Umbrella’s research. As such, despite the public appearance of wanting to eradicate the illegal practices, he was keen not to implicate his own country in these dealings. 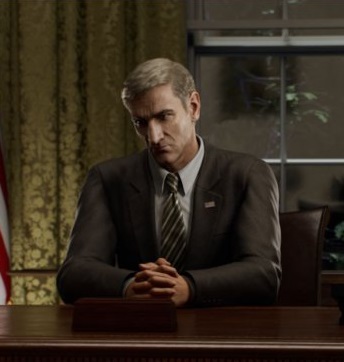 During Graham’s first term of office he ordered the intervention of US troops in the Panemstan Civil War. Unbeknownst to him, this war was to be used by Secretary Wilson and Tricell as a test bed for virus testing and a near unlimited supply of test subjects.

In 2004, during Graham’s second term, his daughter Ashley was abducted whilst at college in Massachusetts by a cult group called Los Illumindos. The group was tracked down to Northern Spain and Graham called in Agent, Leon S. Kennedy to track down and rescue his daughter. Thankfully Leon was successful in his mission reuniting Ashley with her father and the beloved family dog.

In 2005 the FBC were involved with the Terrigrigia Panic which saw a similar outcome to the Raccoon City Incident and the Italian city destroyed to protect further viral outbreak of the T-Abyss Virus.

In the same year two further biohazard outbreaks occurred on US soil. The first was in the mid-western city of Harvardville when disgruntled activist, Curtis Miller released the T-Virus at the local airport. The attack had been masterminded by former Umbrella employee Frederick Downing. Another incident, presumably with the T-Virus also occurred in St.Cloud Minnesota.

In 2006, the threat really came close to President Graham when the White House suffered a small scale biohazard outbreak with a T-Virus variant. The outbreak was used a cover for a data breach of confidential information relating to a Chinese Laboratory. The blame therefore was parked with the state of China, at least by Secretary Wilson. Graham however was not convinced and ordered Leon, Jason and Shenmei to investigate the matter further.

Unknown to Graham was that the attack on the White House  was of course a complete ruse orchestrated by Wilson to ensure Graham remained committed to maintaining a military presence in Panemstan – a country geographically close to China. However, with Graham personally pushing peace talks and the US deployment returning home,  Wilson decided to take action to ensure his continued supply of test subjects.

A further attack on the US submarine and verbal encouragement by Wilson fueled Graham’s suspicions over China, but thanks to Leon’s investigations the truth was revealed that it was an inside job just before Graham was due to announce the US continued involvement in Panemstan. At the last moment, with Agent Patrick updating Graham, he amended the speech to promote peace and the US phasing out their troops.

Post incident, it can be presumed that Graham was presented with the information obtained about Wilson’s plans by Leon. However, it was felt that such information should not be made public.