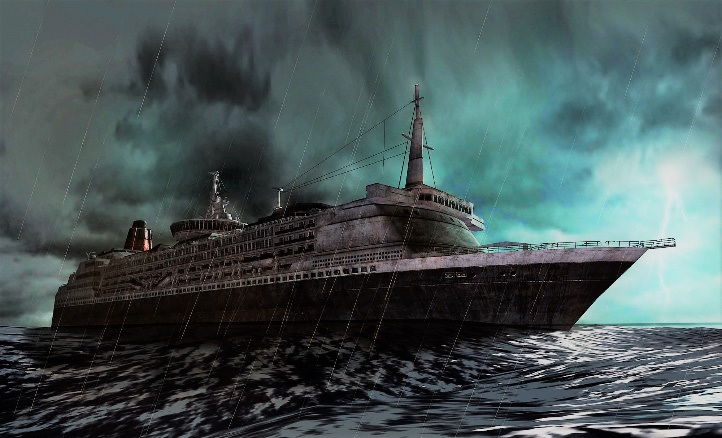 Built during the 1970’s in the golden age of cruise ships, the Queen Zenobia gained accolades for its design from the newspapers of the time. The ship herself was named after Zenobia, the queen of the Palmyrene Empire who was deposed by the Romans. Like the legendary beauty of her namesake, this ship was also known as “The Beauty of the Atlantic,” and remained one of the most popular cruise ships built in the 20th century. It was powered by powerful steam turbines and weighed 148,000 tonnes with a displacement capacity of 90,000 tonnes. It was 335.8 meters in length and 52.3 meters wide.

With the rise of air travel supplanting the popularity of long, sea-faring voyages, it looked like the Queen Zenobia, along with her sister ship, was destined to be junked in the late 80s. But in a stroke of good fortune she was purchased by the Paraguas Line and her steam turbines were replaced with an electric diesel propulsion system. Her hold and cabin areas were expanded, and she was upgraded with the latest technology. The Queen Zenobia was reborn as a fully functional luxury liner.

After its restoration, the Queen Zenobia set out on a cruise around the world, followed by one around South America, and many, many others. The Paraguas Line was a Spanish subsidiary of the Umbrella Corporation and underneath the bilge the lowest sections of the ship were converted and outfitted with ultra-modern laboratory facilities so that viral research could be carried out in the utmost secrecy offshore.

The foredeck at the top of the ship consisted of the communications antenna and a helipad. Inside was a circular lounge with sofas and stalls affording a 360 degree vista of the ocean. An elevator on either side of the viewing room led down to the luxurious promenade hall. Boasting an area of 1500m2, the promenade hall had three floors and was more spacious than any other ship in the world. The interior was designed in a gothic style, with ceilings covered in chandeliers. Its beauty and splendour rivalled that of the world’s finest opera houses and standing pride of place above the staircase was a huge ornamental clock with a solid gold pendulum. The bottom floor was made of the finest patterned marble and the walls were traditional oak panels with illuminated portraits and decorative reliefs scattered at various intervals blanketed with rich red wallpaper. The second floor of the hall was a door that led to the solarium. This giant room was made up of shuttered glass on the roof overlooking the world’s largest on-board swimming pool.

The first floor contained the doors to the emergency communication room located behind the staircase and the clock. This room was used as a safety point during an emergency and crew could transmit an emergency signal from here should the need ever arise. A door on the opposite side of the promenade led to the main dining hall which was a spacious eating area in the style of a grand ballroom. There was a V.I.P. room in here and an opposite exit leading directly to the library and the lower cabins beyond with rooms decorated in the style of a traditional manor house. A staircase in the dining hall led to the upper cabins and there was elevator access down to the shopping area of the promenade deck and the bridge. There were also conference rooms for business hire and private study rooms dotted around.

On the bottom floor of the grand hall was the entrance to the casino. In here all kinds of gaming pleasures awaited potential guests, including card games and slot machines and was open 24 hours a day. Opposite the casino was the door for the promenade deck which housed a vast array of retail outlets and eateries including designer goods and brand-named stores from around the world. There were also shops for everyday needs and many fine bars and restaurants. In the bowels of the ship were the bilge and the machine rooms. These areas were off limits to guests and included the hold and crew areas. The labs were located at the very bottom and the Trident Key was needed to access this point. Other restricted areas across the ship could be unlocked with the Helm, Lifebuoy and Iron Anchor keys.

In 2003 following Umbrella’s demise, the Queen Zenobia and its sisters Semeramis and Dido were sold off and acquired in secret by Morgan Lansdale who later supplied them to Jack Norman and Il Veltro to use as operational bases during the Terragrigia Panic. The t-Abyss Virus was developed in secret on board the Zenobia and remained the only production source of the virus until the ship’s destruction in 2005.