Quint Cetcham was a member of the original Bioterrorism Security Assessment Alliance (B.S.A.A.) established by Clive O’Brian, Chris Redfield, Jill Valentine and eight others. He was something of a techno nerd and was always the man to go to if anyone had issues with their equipment. Amongst his many talents was an ability to hack into most computer systems and he was a specialist in this field. Quint proposed and later helped develop the Genesis Scanner which was put into production by the Global Pharmaceutical Consortium and issued to all B.S.A.A. field agents. This was a portable device able to record vast amounts of genetic and viral data. He also devised and developed a special headset to aid his vision and survey the surrounding environment whilst on field missions. 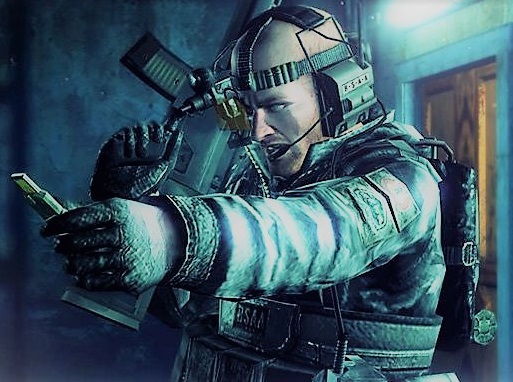 His call sign was ‘Jackass’ after the affectionate name his colleagues gave him. Quint also trained as a researcher specialising in biological warfare and analysis. He was extremely intelligent with a high IQ and was a fan of horror films and philosophy.

When out in the field he was usually partnered with Keith ‘Grinder’ Lumley and whilst they would quarrel with each other at the drop of a hat due to their opposing personalities, they actually complemented each other in what became an effective partnership. Whilst not as popular as his partner with the ladies, Quint held a secret love for fellow agent Jessica Sherawat and developed something of a fixation with her. One time he even tried to follow her home to find out her address but she skilfully gave him the slip, leading Quint to get embarrassed when Keith tricked him into admitting he was stalking her.

Back during the time of the B.S.A.A.’s initial establishment, Quint preached the need for purpose-built equipment and firearms capable of dealing with special situations relating to bioterrorism and focused on the customised ‘Samurai Edge’ weapon utilised by the former S.T.A.R.S. team. He studied the M92F Samurai Edge belonging to Jill Valentine and developed a successor he named Samurai Edge A1, based on the new M9A1 Beretta 6mm. As a tribute, Quint had the S.T.A.R.S. medallion emblazoned on the grip and a S.T.A.R.S. and ‘Kendo Custom’ engraved on the slide. This weapon was given to Jill by Quint to use on the front lines.

In 2005, Quint was at B.S.A.A.’s main headquarters watching the Veltro revival incident unfold. After watching the Veltro leader’s threat, he realized the group was quoting Dante to justify many of their actions. He was soon sent with Keith into the field by O’Brian to investigate Valkoinnen Mokki airport, despite confessing that he hated snow and the cold weather. Once on site, Quint used his hacking skills to discover the co-ordinates for the missing Queen Zenobia, only for them to actually be for the Queen Semeramis. He also discovered the F.B.C. were actively looking for the ships.

As the whole mystery unfolded around them, Quint was the first to realise that the whole Veltro revival act was a fake and that the terrorists had not been involved at all. He was also the first to discover that his own boss, Clive R. O’Brian had planned the whole thing and that F.B.C Commissioner Morgan Lansdale was also involved. He used his tech skills to hack into the F.B.C.’s secure server and this prompted a wave of attacks from B.O.W.s in the area. As a last resort to prevent Quint getting the information out, the F.B.C. fire-bombed the whole base, destroying the computer before Quint could finish his upload to O’Brian. However, the file eventually made it through which gave the B.S.A.A. the known location of the third and final ship; the Queen Dido, which had been resting on the bottom of the Mediterranean Sea ever since the Terragrigia attacks one year earlier. Although Quint and Keith were still inside the base when it was firebombed, they both survived the attack and walked away unharmed.

Following the incident, the B.S.A.A. was restructured and reformed under the jurisdiction of the United Nations, and Keith and Quint’s successful partnership ended when Keith transferred to the new Eastern European branch. Quint meanwhile, turned down a promotion and remained stationed at the B.S.A.A.’s main headquarters in England. There he remained working in the technical department for the European branch and had the rather bloated job title of ‘Technology Development Division Assistant Deputy Manager.’ It was a role he excelled in and his skills, creativity and passion for the research was unrivalled throughout the department. But his eccentric personality and hobbies resulted in a common view from those around him that his behaviour was annoying and that he had no qualities to teach or supervise others. This was mainly why Quint was content with the honorary post of Assistant Deputy Manager and did not worry about other details. He could only even remember his official title when asking the impossible of the accounting department to accommodate his research and development expenses.

In 2011 Quint received an e-mail from Jill who said she had a friend looking for an excellent gunsmith who wanted to meet the developer of the ‘Samurai Edge A1’ model. Quint was so busy he originally intended to decline the offer until he realised the client’s name was Barry Burton. He later worked directly with Barry to design a superior successor to his original customised Beretta 9mm Samurai Edge originally designed by Robert Kendo. Quint worked with Barry in the lab over several weeks and after just one test firing, Barry was happy that Quint had done him proud.