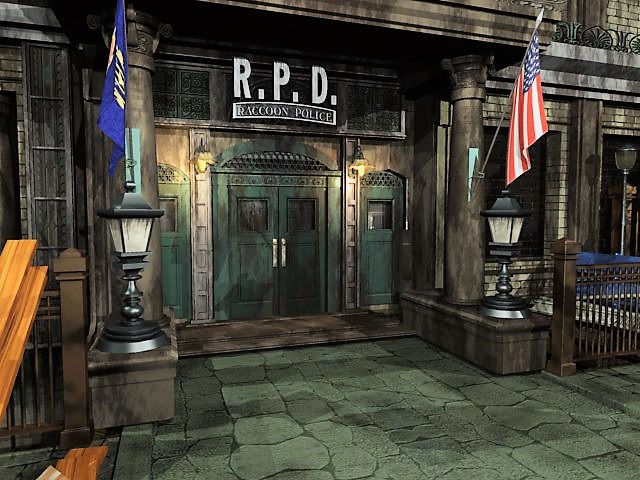 This retro building that served as headquarters for the city’s police force was originally an art museum. It closed down in the late eighties and was purchased cheaply by the RPD for use as a police station due to its centralised location and ample parking structure. Chief Irons was said to be the mediator of the deal and many of the officers working under him believed this was down to his fierce passion for art. Despite renovations, many art pieces from the building’s time as a museum still remained on display throughout the precinct. Although the building became operational not long after being bought out, further renovation work continued for several years, though it never affected the day to day work running of the station. Many were secret extensions designed and installed by Umbrella once they had Chief Irons firmly on their payroll. This included a secret room built just underneath Irons’ private office. This place provided access to the underground sewer network, which in turn led to Umbrella’s main underground laboratory where William Birkin was stationed. Irons held regular meetings with Birkin and this was the route he took to ensure no one else in the precinct became wise to his activities. There was also a more public access to the sewers through the kennels beyond the cell block. It was connected to the scrapyard at the rear of the station and the entrance was watched over by one of the workers there named Thomas. Thomas was fond of chess and went so far as to design a special lock and key for the door made up of chess pieces. He had regular contact with George Scott; the Night Watchman and the two would often meet up to play chess together.

Situated on Ennerdale St in uptown Raccoon City, the R.P.D. was made up of two main floors, with a basement and a third floor balcony leading to a bell tower. The main entrance hall was a grand space and formally the main exhibition hall for the museum. Here an R.P.D. emblem was emblazoned on the marble floor and a statue of a water goddess took precedent over the room. This statue contained a trick lock to open up a small ventilation space leading to the outside. When the building was a museum this shaft was used by employees to transport art pieces in and out of the building. The main hall acted as the central hub of the whole station. The reception desk handled public enquires and controlled the electronic security lock system for the whole building. Behind the desk was an emergency ladder leading up to the second floor balcony. The west wing of the building was accessed via a door leading to the main waiting room and a second door leading directly into the western patrol office. A single door on the opposite side led to the east wing. The western wing of the ground floor held a small waiting room and reception desk. Beyond that was an L-shaped corridor containing a file archive room. Beyond that was a strategy meeting office with a storeroom at the back. There was also a darkroom, an evidence storehouse and finally the western office where Leon S. Kennedy was to be based upon starting his new job. Officer Marvin Brannagh also worked from here. There were also a number of connecting corridors, some of which had an electronic shutter mechanism for added security.

The ground floor east wing contained the eastern office and included desks for Officers Kevin Ryman and Jean. The corridor running past the eastern office had a number of public phones and a vending machine. This led down towards two interrogation rooms and the press room. The eastern office room also contained a closed off sergeant’s office and a storage safe formerly situated in the S.T.A.R.S. office upstairs. A small corridor at the back of the eastern office led to an emergency exterior stairwell to the second floor and a corridor down to the Night Watchman’s room. This small office housed a set of bunk beds for officers on night duty as well as doubling as a locker room for some of the regular officers. Kevin Ryman’s locker was located here. The Night Watchmen was also responsible for Joker Key, which allowed access to every room in the precinct.

Outside this room a set of stairs led down to the basement level. The basement contained an emergency exit to the extreme left, an autopsy room, power room, and weapons storage requiring an electronic key card for access. Beyond that, the main underground car park led through to the kennels and holding cells. A shutter led to an access ramp for vehicles to drive back up to surface level. The kennels were for the prized Dobermans Rocket and Jo Jo, and contained sewer access leading to a waste disposal plant located behind the police station.

On the second floor of the building, the western wing contained the S.T.A.R.S. office running under Captain Wesker. There was also a janitor’s work space and the library. The library was the only way to access the third floor balcony overlooking the main hall. This small walkway led to the bell tower, which was strictly off-limits thanks to Chief Irons, though the Night Watchman has been known to slip in there on occasion for a crafty drink and a smoke. Inside the bell tower was an old dust chute which dropped back down to the holding cells on the basement level.

The second floor east wing housed the secretary’s office, an old storage room full of old works of art and the office of Chief Irons. There was also a corridor leading down to the helipad and water tower, as well as access to the emergency stairwell leading back down to the ground floor. The Raccoon City Police Station was completely obliterated on October 1st, 1998 following deployment of an experimental thermobaric missile into the town.