Ramon Salazar was a devious and insane 8th generation castellan of a huge castle overlooking a rural village in Southern Europe. His childlike appearance was deceiving and behind it was a man who acted with an intelligence and cruelty that only an adult was capable of.

Ramon was small and fragile and his grey hair and wizened face made him look far older than what he really was. His noble family had a long history with the Los Illuminados cult. The previous castellans tried to suppress the religion, removing its dark secret from the clutches of the cultists. Ramon, however, was orphaned at a young age and grew up alone with just his butler for company. 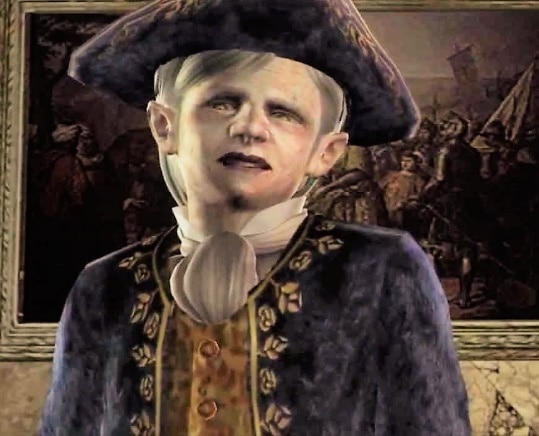 Because of this, he became the perfect target for the brainwashing talents of Osmund Saddler. The insidious cult leader turned him to the beliefs of the Los Illuminados and manipulated him into removing the ancestral seal that kept Las Plagas hidden away. Long ago, Ramon’s ancestors had recognised the dangers of Las Plagas and had sealed the away the parasites deep underground. Saddler convinced Salazar to atone for the ‘sin’ his ancestors committed, and together they revived Las Plagas.

This led to the creation of the countless abominations that Leon came across during his investigation. As a token of gratitude, Saddler granted Salazar the power of a Dominant Plaga; a variant that allowed the host to retain all intelligence and control the parasite completely. By using the power of this parasite, Salazar vowed to protect Saddler’s plans to the bitter end. Salazar’s butler could sense Osmund Saddler’s misgivings from a mile away, yet was powerless to do anything about it after learning that Ramon had already injected himself with the Plaga and once it hatched, there was no going back. However, he decided to remain loyal to his master until the very end.

Saddler also manipulated Ramon into believing that the entire cult was under his control, but this was not the case. To add to this illusion, Castle Salazar became the unofficial ‘base’ of the Illuminados, with its many rooms and hallways soon swarming with cultists performing various rituals and ceremonies.

A primitive B.O.W. known as the ‘Novistadors’ were also kept in the basement of his castle and thanks to their efforts, they managed to re-capture Ashley from Leon’s clutches. Salazar was placed in charge of performing the ritual that would inaugurate Ashley as an official member of the Los Illuminados, which he completed successfully. He also had two bodyguards known as Verdugo; skeletal creatures that were about 20 times more resilient than the average Ganado. He dispatched one to kill Leon and when that failed, merged himself with the other as they were consumed by the large Mother Plaga organism that had made its home at the highest point of the castle. Although Salazar became stronger thanks to this mutation, he was eventually killed by Leon.