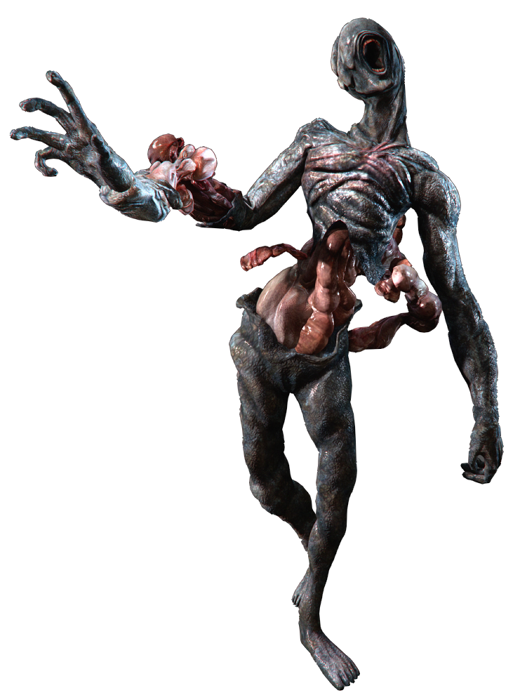 The Rasklapanje was another irregular mutant born from a human chrysalid as a Complete Mutation Species. Neo-Umbrella struggled to understand at first how it came about or how it was able to dissemble and reattach its own body parts at will. It is named after the Serbian word for ‘dismantle’ and is derived from its ability to split its body into multiple parts. Its true body in the abdominal cavity underneath its smooth, whitish skin, and damaging the flesh or even severing the creature will usually have little effect. The blue-whitish outer layer is formed to protect the leech-shaped body concealed inside the membrane, and the creature is able to change its shape freely like a mollusk.

Because there is no effect on the main body no matter how many pieces the outer layer is divided into, it will split apart as if disassembling and attack its prey. While it may appear to be immobilized after suffering a certain amount of damage, it is able to recompose itself shortly after, and displays other peculiar behaviour such as tearing off and throwing its own hands. When it splits its own body, generally the upper and lower halves of its body and its hands will detach and are able to move independently—the Rasklapanje can reassemble itself at any time though. Due to its mollusc- like, supple body, it is also able to squeeze through narrow passages such as ventilation ducts.

But whilst it may seem like an almost invincible B.O.W., it is weak to fire, and its true body will reveal itself if exposed to high temperatures. The Rasklapanje’s real form can also be seen when it forces itself into another captured body via the mouth when reproducing. By using certain objects, a Rasklapanje’s hands can be defeated in a variety of unique ways—for example, they can be zapped in a microwave, thrown in a pot of boiling liquid, flushed down a toilet, or shredded in a mincer. When a Rasklapanje splits its body parts, a trail of tendrils or cuvierian tubules are left behind reminiscent of a konowata sea cucumber. Its arms are elongated and flexible, enabling the creature to use them as whips. It also has an inner proboscis inside its mouth that it uses to attack its victims and implant an embryo for reproduction. These embryos will then burst through the dead quarry’s chest cavity. The texture of a Rasklapanje’s elasticated skin is smooth and wet and it has no discernible nose or eyeballs. It can squeeze and contort its body into small confined spaces such as floor cavities and ventilation ducts. A primary weakness of a Rasklapanje is exposure to high temperature and fire. Pumping them full of bullets is usually futile because of their astounding regenerative capabilities.

Although initially a random mutation, Rasklapanje was modified and improved to become one of Neo-Umbrella’s most impressive Complete Mutation Species products. They are ideal to be dropped into enemy territory where they will quickly cause havoc and reproduce. Elements from this creature were also incorporated into the Haos at the Seabed laboratory.