Raymond Vester was an enigmatic yet mysterious individual. His true loyalties were unknown but he had a knack for manipulating situations to suit his own needs and it is possible he was an industrial spy similar to Ada Wong for they shared many similarities. He joined the F.B.C. as a rookie agent around 2004 with a strong desire to help people and possessed a firm sense of justice. Later in his career he also joined the ranks of Tricell as well as building up a secret alliance with B.S.A.A. Director Clive R. O’Brian. With ties to so many differing organisations, he was well placed to gather intelligence and influence individuals to achieve his own goals. The most important unanswered question concerning Vester was whether he was always this way or if at some point his head was turned by a particular event that made him change his outlook on life.

One such event may have been the Terragrigia Panic of 2004 which was Vester’s first major operation in service of the F.B.C. He was on site for three weeks and worked under the supervision of Parker Luciani amongst others. He was young, naïve and eager to please at that time and being involved in such a major bioterrorism incident opened his eyes to what was wrong with the world. 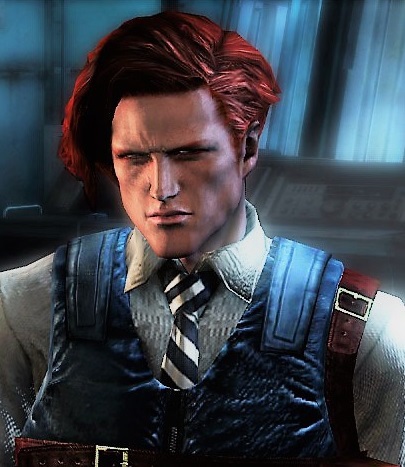 Although just a rookie, Vester was extremely intelligent and came to believe there was more to the Terragrigia Panic than what was shown. He believed the attacks were too professional and too efficient to be just the work of a lowly Italian terrorist group. He secretly believed another party was involved yet he had no proof and initially kept his suspicions to himself. Near the end of the third week, all F.B.C. agents were suddenly given the order to pull out after Commissioner Morgan Lansdale was given authorisation to use the city’s solar energy satellite on itself to effectively vaporise the biohazard and everything in it. Vester rashly ignored the order and stayed behind to help any remaining civilians, believing they had to still help people.

Shortly after this, the tower the F.B.C. had been using as a command centre was breached by Hunter B.O.W.s being used by the Veltro terrorist group. Vester fought bravely but was gravely injured in this attack and rescued by Parker and Jessica Sherawat. Parker saved Vester by applying a tourniquet to his left leg and practically carried him to safety. On route to the command room Vester tried to explain his suspicions about the cause of the incident to the two agents but they both dismissed him out of hand. It was only when Vester burst into the command room and overheard Morgan Lansdale on the phone to an unknown individual did he come to believe Lansdale was not all what he seemed. Vester later escorted Lansdale and B.S.A.A. Clive O’Brian to the heliport after they had a furious argument and they were all evacuated before the city was destroyed.

Following the incident, Vester became cold and ruthless as the events of Terragrigia had left a profound imprint on him. He believed too much red tape hampered investigation and vital evidence was being lost. His suspicion of Lansdale festered and in order to get things done he gained a reputation for using forceful searches and investigation abilities, being uncooperative with local law enforcement and hampering B.S.A.A. investigations. He justified his methods by the results he got and held a strong belief that ‘Nothing would change unless you got your hands dirty’. Through his own investigations he was acutely aware that Clive O’Brian shared similar misgivings about Lansdale.

In 2005, Vester approached O’Brian in secret with his concerns over Lansdale, believing he could trust him following the B.S.A.A. Director’s own disgust at the F.B.C.’s handling of Terragrigia. O’Brian shared similar concerns and together the two concocted an elaborate yet dangerous plan to try and expose him. This plan involved the fake revival of the terrorist group Veltro and using B.S.A.A. agents to subsequently investigate and hopefully panic Lansdale into doing something rash to cover his tracks. Whilst O’Brian was uncomfortable about lying to his own employees and potentially putting them in harm’s way, Vester had no qualms about doing so as long as they got the truth out and brought Lansdale down. Vester was also ordered by Tricell to recover a sample of the t-Abyss virus. Lansdale’s researchers had worked with a Tricell research team provided by Excella Gionne to develop the virus but once complete, Lansdale had betrayed Tricell and kept the virus for himself. Now the company wanted revenge. Vester was to work with fellow spy Jessica Sherawat to achieve this goal, but a source of conflict brewed between them as Jessica was also Lansdale’s personal assistant and protégé. Although she was willing to steal the sample for Tricell, unlike Vester, she had no interest in bringing Lansdale down. His powerful position as head of the F.B.C. and his complete trust in her only extended her own power base and opportunities. These were luxuries she didn’t want to lose.

Vester and O’Brian organised a fake Veltro base at an old airport in the mountains of Finland. As word spread about a possible revival, Lansdale panicked and sent Vester and a rookie agent by the name of Rachel Foley to the Queen Zenobia to investigate any potential Veltro survivors on the ship. Once there, Vester masked his face and played the part of Veltro himself to trick B.S.A.A. investigators Jill Valentine and Parker Luciani whilst at the same time gradually guiding them towards the truth about Lansdale. Things came to a head when he was shot by Jessica just as he was about to reveal all and prove Lansdale as the man responsible for Terragrigia. Though he was wearing body armour, he was forced to play dead and was unmasked as Veltro. This forced his plans to change and in order to regain trust with Parker and the others, he reappeared on the bridge and revealed Jessica as the mole working for Morgan. Jessica tried to shoot him again but hit Parker instead before activating the ship’s self-destruct system and fleeing. Vester pretended to chase her but instead let her escape before returning to save Parker to pay back the debt owed to him after Parker had saved him in Terragrigia.

Following the incident, at a meeting at a cafe in an undisclosed location, Vester handed Jessica the recovered t-Abyss sample to hand over to Tricell. However, this had always been a secondary objective for him as his real goal had always been to bring down Lansdale, which he had finally achieved and gained justice for those lost in Terragrigia. His current whereabouts remain unknown.