Rebecca was a child genius and graduated from university at the tender age of 18 with excellent academic standing. She was an expert in chemistry and possessed a wealth of scientific knowledge which led to her being scouted by several large pharmaceutical corporations, including Umbrella, but she turned them all down in favour of pursuing a career in law enforcement. In June 1998 she was appointed field medic for S.T.A.R.S. Bravo Team in Raccoon City.

Rebecca was recruited for her extensive knowledge of medicine and first aid. Her youth and lack of experience made her nervous around her new teammates, but the others did their best to make her feel welcome. Richard Aiken became her mentor and Captain Enrico Marini always made himself available. Because the S.T.A.R.S. worked split shifts, she never actually got around to meeting Chris Redfield of Alpha Team in person, though she was familiar with Jill Valentine. 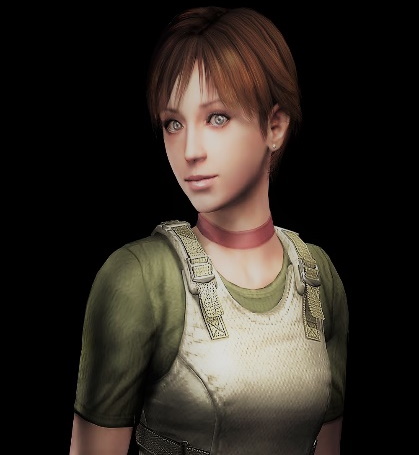 Rebecca was always eager to help and tackled her assignments without hesitation. Alongside Edward Dewey, she was given the responsibility of servicing the teams’ helicopters. She also joined the R.P.D.s female basketball team. Normally, she was precise and highly thoughtful in all her actions, regardless of the circumstances. But she also has a bold side to her personality, progressing through matters at her own pace.

Her very first mission with S.T.A.R.S. was on the 23rd July 1998 when Bravo Team were dispatched to the Arklay Mountains to look for missing hikers. After a crash landing, Rebecca discovered an overturned military transport truck in the forest and the team discovered that escaped convict Billy Coen was on the loose. Figuring he must be responsible for the murders, they commenced a search and whilst looking around, Rebecca found the Ecliptic Express train stopped in the middle of the forest. Inside, she found Coen, but the train was also populated with zombies and other undead monsters. At first she tried to arrest him, but soon realised she would need his help getting off the train alive when it abruptly began to move and cut her off from the rest of Bravo Team.

The Ecliptic Express eventually stopped near an old Umbrella training facility run by James Marcus back in the 1970s. Rebecca and Billy fought through many creatures and began to uncover the true source of the murders and Umbrella’s clandestine work with illegal biological weapons. Initially they believed James Marcus, one of Umbrella’s original founders, was somehow still alive and had caused an outbreak of the t-Virus. However, the antagonist turned out to a genetically tampered Queen Leech who had fused with the corpse of Marcus and inherited his memories, including his burning desire to take revenge on Umbrella and Spencer.

Eventually Rebecca and Billy triumphed over the Queen and were finally free of their nightmare. After learning the truth about Billy’s murder conviction, Rebecca decided it was best to let him go free, and chose to tell her superiors he died during the ordeal. But Rebecca’s troubles had only just begun. After separating from Billy, she headed for a large mansion she believed Enrico and the others had gone to. Unfortunately, she discovered it was also crawling with t-Virus monstrosities. She took shelter in one of the bedrooms in the Guardhouse and having been exhausted from the events of the previous day, fell into a deep sleep. Some hours later, she was awoken by Richard Aiken who her to accompany him on a quest to locate the missing Enrico. Their search took them through the Guardhouse, down the underground tunnels and through the courtyard garden before finally heading back into the mansion. Whilst on the upper floor of the main hall, Rebecca and Richard witnessed Sergei Vladimir leaving the estate with the T-A.L.O.S. prototype. Sometime later, they were attacked by The Yawn and Richard was bitten.

They were too weak to get to the infirmary and were later found by Alpha Team member Chris Redfield. Rebecca proved her worth in this mission, assisting Chris by healing his wounds and saving his life by creating a special chemical that killed Plant 42. She also explained all about Umbrella, who up until that point, Chris had never heard of. Eventually, Rebecca and Chris made it down to the lab to face off against Albert Wesker. Thanks to her bullet-proof vest, Rebecca survived getting shot by the traitorous S.T.A.R.S. captain. Following Wesker’s defeat, it was Rebecca’s decision to activate the self-destruct device and blow up the entire estate. She rationalised this by explaining there was still a significant amount of t-Virus present that needed destroying.

Following the incident, Rebecca submitted her report to Chief Irons and declared missing fugitive Billy Coen as being dead. She worked with military authorities and led them to the site of his corpse in the forest. But knowing no remains would be found, Rebecca put the case down to local animals.

When S.T.A.R.S. were disbanded, Rebecca left Raccoon City for personal reasons of her own and did not join the resulting fight against Umbrella. But when the B.S.A.A. were founded in 2004, Rebecca and Barry Burton were invited to join as consultants by their old friends Chris and Jill. Rebecca accepted this post and found herself relishing the opportunity to get back into the field. She had always maintained a keen interest in medical science and wanted to dedicate her life to stopping people abusing it. She also received training in self-defence and martial arts.

In 2005 Rebecca assisted B.S.A.A. operatives during a t-Virus outbreak in St. Cloud, near Rochester in Minnesota. The perpetrators behind the incident were a group of rogue ex-Umbrella employees. During a zombie attack Rebecca saved the life of a police officer named Tyler Howard. He was investigating the remnants of Umbrella after his father had gone missing whilst working for them on classified projects. They were soon separated but Rebecca made Tyler promise to keep the information about his father a secret.

Following this incident, Tyler was recruited by Adam Benford into the Secret Military Agency and his death was faked. She has also witnessed the effects of B.O.W.s in Africa and Middle-Eastern countries. Rebecca continued her B.S.A.A. consultancy role over the next several years and her last active field mission came in 2008 although the details remain publicly undisclosed.

In 2010 Rebecca was intrigued by a missing person’s case from Philosophy University in Western Australia. Looking deeper into the mystery she discovered one of the professors working there was Tyler’s father Ryan Howard, a confirmed ex-Umbrella employee. Rebecca immediately submitted an investigation request to the B.S.A.A. who put her undercover as a supply teacher. She then arranged a meeting with the Senior Dean, Ezra Sennett, and soon took up a temporary teaching position in the science department. From there Rebecca met Mary Gray, an extraordinary student with a remarkable IQ of 230 who suffered isolation problems because she found it hard to bond with anybody.

Rebecca also made numerous trips to the fossil museum where Professor Howard worked and her movements were picked up by Barrington Meyer; a police detective hired by Sennett to discreetly investigate the missing student disappearances. He conducted a background check and discovered her past as a Raccoon Police S.T.A.R.S. member. Eventually, a full biohazard outbreak occurred at the university and most of the students and staff were zombified. Rebecca put a call in to Chris Redfield who came to assist alongside Piers Nivans and members of the B.S.A.A. Oceania branch. Rebecca also had a reunion with Tyler Howard, now a U.S. Government agent and still following up leads on his missing father. Professor Howard was revealed to be the ringleader behind the incident, although it was also revealed that Mary Gray had been manipulating him all along. Rebecca discovered she was Howard’s adopted daughter and had adapted perfectly to a course of medical treatment involving the t-Virus to cure here of a terminal blood disease. Mary now saw herself as something superior to all of humanity and wanted to ‘reset’ the world by first destroying it, but she was eventually defeated when she mutated and Rebecca handed Chris Redfield a rocket launcher to fire upon her.

Sometime after the university incident, Rebecca returned to the U.S. and gained employment at the Alexander Institute of Biotechnology in Chicago as part of a research team developing vaccines for dangerous infectious diseases and viruses. Her work also saw her become an advisor the D.S.O. as well as the B.S.A.A. and she was formally introduced to Leon S. Kennedy.

In 2014 the Great Lakes area of the United States was hit with multiple small-scale outbreaks believed to have been caused by a new strain of virus. Rebecca and her team studied the infected bodies and she managed to synthesize a working vaccine. She reported her initial findings to the World Health Organisation who then forwarded it onto facilities worldwide specialising in vaccine research. Unfortunately this information was leaked to Glenn Arias; a dangerous weapons-trafficker and creator of the deadly new A-Virus that was responsible for these new outbreaks. Concerned that his work may be disrupted, Arias had his associates cause a biohazard at Alexander Institute in order to kill Rebecca and steal her research in the process. Rebecca only survived thanks to injecting herself with her own trial vaccine and the timely intervention of Chris Redfield and the B.S.A.A.

When Arias learned that Rebecca had survived and that her vaccine was successful, he plotted a second assassination attempt only to change his mind when he realised she was the living doppelganger of his late wife, Sarah. Instead, Rebecca was taken alive and brought back to Arias’ hideout in New York. There Arias appealed to Rebecca about his work and tried to persuade her to marry him. Rebecca rejected his advances so instead Arias planned to graft the preserved arm of his dead wife onto Rebecca and inject her with a more potent strain of the A-Virus engineered from her own blood.

Fortunately, Rebecca was saved by the actions of both Chris and Leon working together. She later helped the others disperse the vaccine across the skies of New York and save thousands of lives in the process.