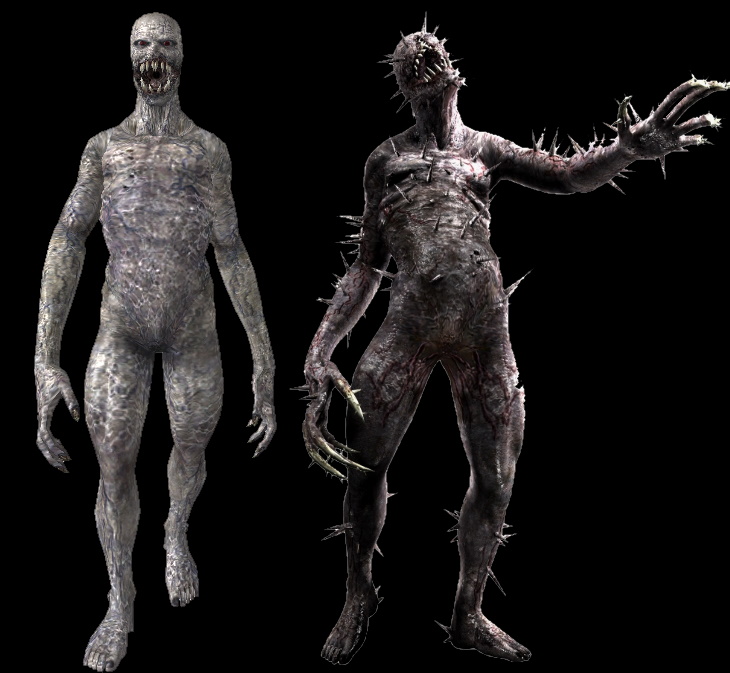 REGENERADOR – The Regenerador was created through experimentation by implanting multiple Plaga parasites in a single human host. As can be inferred from its Spanish name, it possesses incredible regenerative capabilities thanks to an unnaturally high metabolism and can replace lost body parts almost instantaneously. Although still humanoid, the body constitution has been completely changed and it suffered a variety of peculiar mutations including the loss of both ears and the nose, glowing red eyes, and a constantly drooling mouth split wide open with rows of sharp, fang-like teeth. Although they are slow, their arms can stretch to great distances, allowing them to snatch their prey and snap them back into their waiting maw. Their smooth bodies are free of all sexual characteristics, making it impossible to tell if the original test subjects were male or female. Their internal organs, including their brains, seem to have coalesced into a uniform mass, so that no human intelligence remains within them. Their skin carries certain elasticity which enables it to stretch out its arms to unnatural lengths and it can contort and twist its body in a manner not possible for an organism possessing a conventional skeletal system, suggesting the multiple Plagas within are responsible for total motor control.

The Regeneradors have a deliberate menacing and frightening appearance. Their enlarged mouths and rows of teeth leave a permanent fixed grin on their face and they constantly let out a menacing breathing sound as they shuffle forward. Although they appear slow with only stilted movement, they are capable of sudden and significant bursts of speed. The only way to kill a Regenerador is to destroy all the leech-like Plagas inside its body which can be detected via thermal imaging, or to obliterate its body mass entirely. This creature represents one of the early successful Plaga-based weapons. Elements from its development data were actually used by Tricell and incorporated into the Ndesu B.O.W. several years later, highlighting that B.O.W. development is not performed by repeated, random experimentation, but follows a specific methodology similar to regular weapons development.

IRON MAIDEN – The Iron Maiden was a combat specialization of the Regenerador that has countless needles embedded in its body as well as retaining the Regenerador’s regenerative abilities. It can also stretch its arms to capture and impale targets on the protruding needles. Interestingly the face of an Iron Maiden is more grotesque that its Regenerador brethren thanks to a more deformed mouth with a split upper lip to expose more teeth and a complete lack of eyeballs. Its hands also developed less fingers but they became more enlarged like claws. This complete alteration of its physical constitution leaves behind only a vaguely humanoid appearance as a reminder of its human origins. Its name is taken from a medieval torture instrument, a human-shaped container with spikes on the interior used to execute victims by closing them inside.