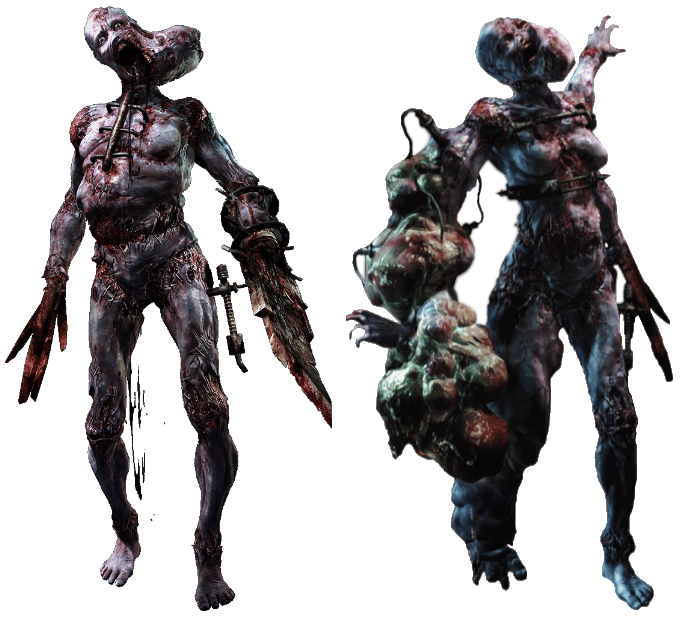 Revenants were the direct result of Alex Wesker’s research team attempting to create a humanoid biological weapon using the Uroboros Virus as a base. Early experiments involved injecting the virus into a freshly dead corpse and the effects were unexpected. Results showed that Uroboros immediately propagated and formed a nucleus before growing through absorbing organic matter and jump-starting vital activity. It reorganised all the organic material around the nucleus and reanimated the corpse. The nucleus took the form of the trademark orange nacelle and served as the control centre of the organic growth and destroying the nacelle would negate the reanimation process because virus activity would not be maintained. These reanimated corpses had fully functional motor control and began moving like marionettes. They were also extremely aggressive and would attack anything close by.

Normally when Uroboros infected living organisms it would envelop all nearby organic matter to grow and the body would self-reproduce through a process of continual destruction and regrowth, but when injected directly into a non-functioning corpse the effects were profoundly different. In the case of the Revenants, the virus was injected into already dead tissue containing no Adenosine triphosphate nucleotide, meaning regular cellular functions such as cell division and membrane synthesis had no energy for the virus to bind and create the black viral cysts that transformed organisms with incompatible DNA.

The researchers refined this process by creating primitive humanoid weapons using different body parts from various dead corpses, including already dead ‘Afflicted’ and torture subjects from the prison that still had metallic implements and rods hammered into their flesh. Various limbs and appendages were crudely stitched together to produce all manner of horrific concoctions. Some had two heads, others had three arms, and further variations included multiple legs and sometimes no head at all. Once the differing parts were all connected together to form the ‘body’, further surgeries were performed to attach weapons such as saws and blades to its limbs before eventually the virus was injected and the creations brought to life.

Revenants were slow and moved with jittery, stilted movements thanks to their bodies being comprised of a mis-match of differing body parts crudely attached together. But once they spotted their prey, they moved remarkably fast thanks to Uroboros’ ability to seek out and consume all organic matter for continual regrowth. They could even drop down onto all fours and scuttle along like quadrupeds. The virus propagating throughout the stitched-together limbs was controlled by the central nucleus/nacelle that remained hidden from view. This was the source of the creature’s cellular revival and they would consume any living organisms in order to sustain themselves. But because these organisms were comprised of severely decayed dead flesh, they were significantly weak and body parts and limbs could be shot off or broken off with very little effort.

The extraordinary regenerative capabilities of Uroboros could heal these afflictions almost immediately, yet should the central nacelle be exposed, it was a major weak point and destruction of the nucleus would cease all viral activity and the Revenant would perish immediately. These creatures also possessed no intelligence and were impossible to train to follow even basic commands. They could also not be deployed alongside other non-Uroboros-based bio-weapons as they would turn on them instantly as a nutrient source.

They existed solely for the reason of self-propagation and consumed any living or dead organic being they could find, including all the wild game living across the island. The name Revenant has its origins in European folklore, describing a living corpse that has returned from the dead to exact its revenge on those still living.

The Splasher are similar to their regular Revenant counterparts although further manipulation has been done to one of its arms, resulting in a grotesque, tumour-like mass that is capable of secreting a thick venom that it can fire at its target and cause temporary blindness. Although all other basic functions remain the same, including a single orange nacelle acting as the nerve centre for virus activity and reproduction, the Splasher Revenants are seemingly comprised of all-female body parts. Whether this holds any significance to the creature’s abilities or behaviour remains unknown.