Reynard Fisher was an infiltration agent for the West African branch of the B.S.A.A. He was a former member of the Ministry for State Security for an unknown African country and now carried out similar duties for the B.S.A.A. having been recruited and persuaded to join. He possessed a keen ability to infiltrate densely populated areas undetected and extract key information without arousing any suspicion.

In early 2009, Reynard was dispatched to work undercover in Kijuju, Africa. One of his contacts was a local butcher and he provided Reynard with information until he was killed by the Executioner Majini in January. Reynard himself took over at the butcher’s shop to further conceal his true identity. He wore a large turban and a scarf to conceal his face. By mid- February he was able to detect evidence that Las Plagas was present in Kijuju and relayed this intelligence back to the B.S.A.A. Information Office. 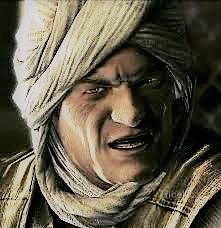 Days later, Reynard confirmed that known weapons dealer Ricardo Irving was in Kijuju putting together a suspected black market weapons deal. The intelligence Reynard provided on this matter allowed for the B.S.A.A. to put together an operation to apprehend him. He also heard talk of a rumoured doomsday project entitled Uroboros; a new weapon that could threaten the entire world. When the operation got underway, Reynard met up with Bravo Team comprised of Chris Redfield and Sheva Alomar and provided them with weaponry. He warned them to complete their objective and leave quickly as Kijuju was a dangerous place. But shortly afterwards, Reynard was captured by the Majini and publicly beheaded in the town square by the Executioner himself.