Ricardo Irving was a skilled and canny businessman, with a talent for generating great liquid capital in situations others would find impossible. He was also crude and extremely arrogant, often using his resourcefulness to sell biological weapons on the black market. He was employed as a director of the oil fields in Kijuju for Tricell Africa’s Natural Resource Development Division. His background remains largely unknown although there were unconfirmed reports he was in Raccoon City at the time of the biological disaster in 1998. Before he came to Tricell full-time, he once worked alongside independent contractor, Ada Wong. In 2006 he was contacted by the personal attendant of Oswell E. Spencer to inform him of his master’s location in hiding with instructions this information be passed onto Albert Wesker. This was done through Ada. 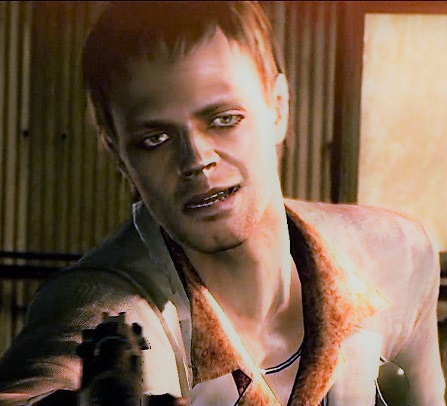 Once at Tricell he was tasked with evaluating and improving the Las Plagas parasites Wesker had passed onto them. His brief was to make the parasite a more marketable weapon for proposed investors. In addition to this he also conducted hundreds of illegal weapons deals. The money gained from these black market sales was then invested by Tricell Africa back into their bio-weapons research and development. The demonstration of these weapons for clients acted as operational tests. Given the degree of Irving’s involvement, it is believed that he was one of only a handful of people that know the full extent of Tricell’s bio weapons business. Irving’s activities and their connection to Tricell had been carefully kept under wraps. Adding to the misdirection is the fact that he was officially employed with the Resource Development Division and not the Pharmaceutical Division that sponsored the B.S.A.A. When the B.S.A.A. learned of Irving’s latest deal, they viewed it as illicit activity conducted on his own and without support from Tricell. The B.S.A.A.’s mission in March 2009, therefore, was not to fight biological weapons, but to apprehend a known smuggler involved in an illicit deal. But Irving was able to exploit that misconception to the fullest.

Irving was informed of the B.S.A.A.’s mission inside Kijuju thanks to a Tricell spy they had on the inside named M. Suzuki, and he changed the location of the deal to a mine outside of the Kijuju Autonomous Zone (KAZ). When a B.S.A.A team arrived at what they thought was the deal’s location inside the KAZ, they walked into a trap that also served as a test of an Uroboros infectant who had been rejected for having inferior DNA. Before the B.S.A.A. even arrived, the improved version of Las Plagas was released upon the populace of the town, transforming most of them into Majini. This Intel was acquired by Alpha Team and later confirmed by the data recovered by the backup team (Chris Redfield and Sheva Alomar) prior to Irving’s deal. But Irving did not take into account that the Uroboros creature would be engaged and defeated by Agents Redfield and Alomar, nor that a hard disk and its data would be seized. The data obtained from the hard disk allowed the two agents to proceed to the actual location of Irving’s transaction – the mine.

When confronted with the reality that his plan had failed, Irving was forced to take the following actions. First, he contacted his partners and requested to delay the deal. After which point, he went to the mine to retrieve any documents and materials relevant to the transaction. It was at this point that Redfield and Alomar found him. However, it was obvious that he had a backup plan for just such a contingency. Irving escaped thanks to the help of a hooded figure he had on standby. The two agents were left to deal with Popokarimu (a bat-based B.O.W.) that was originally intended to be sold to his buyer. Irving released this B.O.W. on the agents in retaliation for disrupting the transaction and not to aid in his escape. It was becoming apparent by this point, that Irving’s mental stability was in question. Whether his irrational behaviour was brought on by the interference of the agents or if the increased stress only brought out his true tendencies was unknown.

After escaping from the mine, he was soon discovered by Captain Josh Stone’s Delta Team inside the KAZ. In order to escape, Irving unleashed Ndesu (confirmed to be based on the El Gigante B.O.W. used in Europe), but it was defeated. The frustration of losing two large, valuable B.O.W.s in such short succession was keenly felt by the avaricious Irving.

After reaching the conclusion that there was nothing more he could do, Irving plotted to escape with his accumulated wealth, but he was soon overtaken by the hooded figure, who provided him a vial containing a Dominant Strain Plaga. This was to be his punishment for failure and he was to administer this on himself in order to fight the two agents. In a last-ditch effort, Irving detonated the oil refinery, but unfortunately for him the refinery was virtually dry at the time thus limiting the size of the explosion. His hope was that he could destroy all incriminating evidence and kill Redfield and Alomar so he would not have to resort to using the Dominant Plaga. But in the end Irving was left with no choice but to administer the injection to himself, upon which he underwent an immense and rapid transformation. But even the power he gained from that transformation did not avail him, and he met his end at the hands of the two agents. As he lay dying on the deck, he gave Chris and Sheva a clue to the nearby cave system which hid the old Umbrella African Research Centre where Tricell had found the Progenitor Virus.