Richard’s early life was tinged with tragedy when he was forced to watch his younger sister murdered by a criminal in front of his own eyes. He was too scared to help her and he carried this guilt into his later years. This led to him maturing early and wanting to dedicate his life to helping others and preventing people from having to go through what he experienced as a boy. When the Raccoon City S.T.A.R.S. team was formed in 1996, Richard applied despite concerns from his girlfriend, Bridgette. But he explained that joining S.T.A.R.S. was the only way he could learn to live with himself again after feeling so scared and helpless when his sister was attacked. 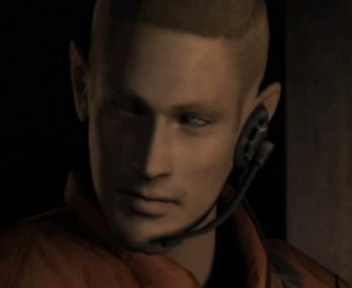 After being accepted into the team, Richard specialised in communications and became Bravo Team’s radio operator, usually becoming the only link between the field and home base. Sometimes he pulled double duty and went out with Alpha Team as they had no trained operator up to his standard. Richard was positive and a very optimistic individual, despite his tragic past. He was a cheerful young man, very eager, and always made sure he always wore a smile. He was always ready for action and greeted new recruits warmly, which led to him mentoring Rebecca Chambers when she joined Bravo Team in 1998, only one month prior to the mansion incident. Richard’s firearm skills were rather inferior compared to the rest of the team and whilst on missions he favoured a combat shotgun as opposed to the Samurai Edge he kept as back -up.

Although combat wasn’t his speciality, he was still an unsung hero who backed up Bravo Team in various other ways. He was considered one of the more reliable members of S.T.A.R.S and whilst in the field, he held the position of back-up man. He was always honest and frank with the other members of the team, always put others before himself and would do whatever it took, even at the cost of his own life, to protect someone.

Richard was dispatched along with the rest of Bravo Team under the command of Captain Marini on July 23rd 1998 to the Arklay Mountains to search for missing hikers. After spreading out to look for the missing fugitive, Billy Coen, he became separated from the others in the woods. He was in radio contact with Rebecca and contacted her just as she reached the Training Facility and explained he was heading towards the Spencer Mansion, asking her to meet him there. As Enrico also carried a radio, Richard kept in touch with him throughout the night. Enrico had lost his bearings in the woods but he knew that Richard and the others were ahead of him and heading for the mansion. Richard, Forest and Kenneth arrived at the mansion first and split up to search the place.

After several hours, Richard came across Rebecca Chambers fast asleep in the Guardhouse. Relieved she was still alive, they teamed up to look for Enrico. After arriving back at the mansion, they witnessed Sergei Vladimir and his Tyrant bodyguard, Ivan, heading away from the mansion and into the woods having successfully extracted the T.A.L.O.S. prototype from the lab.

Sometime later, while searching the library, they were attacked by The Yawn. Richard was bitten saving Rebecca’s life and although they managed to drive the snake away, he was poisoned. They tried to carry on but he was too weak and he collapsed in the corridor outside the attic on the second floor. Sometime later they were found by Chris Redfield of Alpha Team. They administered Richard some healing serum and transferred him to the infirmary to recover.

Before he lost consciousness, he gave Chris his radio. A few hours later, he regained consciousness again and set out to help the rest of the team. But he was later killed by a B.O.W. whilst saving the life of one of his friends.

At a joint funeral by the Raccoon City Police Department, Richard’s letter was read out aloud by his mourning girlfriend, Bridgette.