Ricky Tozawa was a second year student at the Science and Engineering Department of Bennett University in Singapore. He was the nephew of Doug Wright, a professor at the university specialising in microbiology.

Ricky had lost his parents in 2002 and since then Doug had been his legal guardian. He studied on Doug’s course at the university and Doug was always reminding him that they needed to keep things professional whilst in a working environment and not to call him ‘Uncle Doug’ when at the university. Ricky was a good kid but typically lazy for a student. He was struggling a bit with his course and Doug was forever on at him to pay more respect and attention to his lectures. He was also immature and deeply inexperienced with the opposite sex, often coming across very awkwardly around the female students.

When Doug was invited out to Marhawa Academy by Mother Gracia, he decided to take Ricky along as he believed it would benefit his studies and he promised him extra credits. 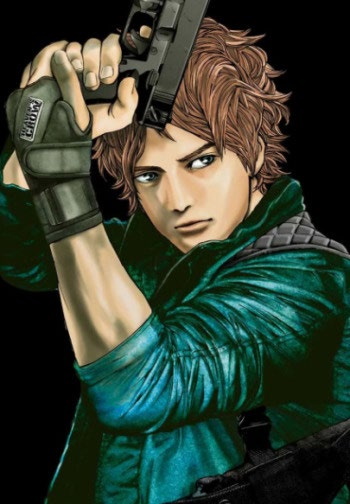 Upon their arrival, Ricky was impressed with Marhawa and treated their excursion as one big holiday. He also became friendly with the senior student council president, Bindi Bergara and the vice chair Alisa Lin. He flirted with them both and Alisa in particular took a shine to him.

Ricky was shocked when Mother Gracia showed them the zombified student chained up in the basement. Doug wanted to bring in the B.S.A.A. immediately but Gracia refused. Instead, Ricky helped Doug try and locate patient zero by searching every corner of the school and its surrounding wildlife. Ricky’s antics caught the attention of several senior students who tried to bully him, but he was saved by Alisa.

Later that night, whilst Doug was out investigating areas of the school, a zombified Alisa attacked Ricky whilst he was asleep and bit him on the neck. Ricky was restrained to his bed and Doug expected the worst. But despite running a high fever, Ricky never transformed into a zombie and seemed unaffected by the bite. Puzzled but extremely grateful, Doug and Ricky resumed their investigation and over time Ricky began to suspect Mother Gracia more and more, believing her to be hiding something. When a fire later broke out at an old building off limits to students, Ricky deliberately accused Gracia of destroying evidence. When a third zombie showed up, Gracia still refused to bring in outside help and sabotaged Doug’s jeep so that he and Ricky could not leave the complex. Gracia insisted she would not let them leave until they had solved the crisis that had enveloped her beloved academy.

After some construction workers got infected in the basement, Ricky and Doug joined Ray Hsu and Tahir Kapoor to investigate. Inside they were attacked by a number of zombies. A dying worker talked of how a mysterious hooded woman had been watching them and after someone mysteriously killed the power, Ray was attacked and killed. Following that incident, Tahir decided to give Doug and Ricky some weapons training and shortly afterwards more zombies attacked on the day of the school festival. When Bindi tried to use the latest incident as a way of exposing Gracia’s determination to put the school’s reputation above human life, she was stripped of her position as school president and placed in confinement, a decision Ricky severely disagreed with.

Ricky was forced to take charge of himself when Doug was severely injured after they cornered the real hooded woman, only to discover she was actually a former student called Nanan Yoshihara who had been transformed into a Lepotica B.O.W.; a creature capable of spreading the C-Virus in gaseous form.

Without the aid of his uncle, Ricky was forced to continue the investigation on his own. By now Mother Gracia decided to finally send out an S.O.S. call to the B.S.A.A. but Ricky lamented it was too late before going to visit Bindi in her room. He’d suspected for a while now that she was hiding something and from the other side of the door Bindi confessed her role in how events had unfolded and how she had received the C-Virus from the hooded woman and injected it into Nanan’s body. Together they caused the biohazard at the school to expose Gracia’s shocking denial of all the bullying and suicide attempts that had taken place at Marhawa. Ricky held Bindi at gunpoint but she had already injected herself with the C-Virus and became a J’avo. After tossing him aside, Bindi and Nanan went on to infect the entire school with the virus. Ricky was eventually amongst the last of the survivors and contemplated suicide just as Chris Redfield, Piers Nivans and Mera Biji arrived to save his life. Immediately, they went to the infirmary to rescue Doug but Nanan had gotten to him first and turned him into a zombie. Ricky was forced to shoot his uncle in the head to put him out of his misery.

Ricky worked with Chris to survive and together they faced down Lepoticia Nanan. However, Ricky spied the hooded woman on a gantry above and ran upstairs to confront her whilst Chris was distracted below. The mysterious woman was revealed as Carla Radames of Neo-Umbrella. She easily subdued Ricky and attempted to inject him with the virus only to be interrupted by an attack from Nanan. Eventually, Bindi and Nanan were both killed and Ricky survived to escape Marhawa on a helicopter with Chris and Piers as the only survivors.

Following the incident, Ricky returned to Bennett University to resume his studies and developed an intense hatred of biological weapons. He was under observation by the B.S.A.A. for some time until they were certain he was not carrying any infection.

A year later he was in Lanshiang, China, when Neo-Umbrella attacked the city. Ricky documented the events with his camera and snapped several pictures of the B.S.A.A. in action, recognising Chris Redfield of Alpha Team. He also saved a woman and her young child from a J’avo. He wasn’t afraid anymore.