Robert Kendo was a gunsmith who ran a gun shop located on Flower St in Raccoon City. He was very good friends with S.T.A.R.S. member Barry Burton and the two of them would often go fishing in the neighbouring town of Stoneville. Barry often picked Robert’s brain on firearms and following his advice, ordered a custom Raging Bull magnum. His older brother Joseph was also in the business which they established together in 1984. Together they frequently worked on various gun customisations.

They had a contract with the R.P.D. S.T.A.R.S. team and worked on many differing firearms, most notable of which was the Samurai Edge. 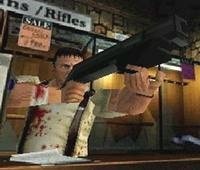 When the biological outbreak hit the city, Kendo considered evacuating to the nearby town of Stoneville, writing Barry a note to meet up with him there. Unfortunately before he could put his plan into action, the city was already too far gone. Zombies roamed the streets and escape was nigh on impossible. In a bid to survive, Robert locked himself inside the gun shop and unselfishly distributed all his firearms out to the panicking citizens, including Barry’s Raging Bull. But thanks to these non-selfish deeds, he was left without sufficient weapons to defend himself with. On September 29th, Leon S. Kennedy arrived at his shop in a bid to seek refuge from the pandemonium outside. Robert took him in and locked the door, advising Leon to stay with him while he kept watch with his shotgun. Unfortunately, Leon’s arrival had caused a number of zombies to follow and they smashed their way through the front glass window and devoured Robert alive. Joseph was not in Raccoon City at the time of the incident.

Formerly a long-time member of the San Francisco SWAT team, Joe participated in many seemingly impossible missions, earning him respect and status as a legend. After leaving the service, he became a gun-smith for hire, quickly becoming famous for his expertise. He was hired as a trainer for the R.P.D. in Raccoon City, where he had earlier established the Kendo Gun Shop he ran with his brother Robert. After his contract as a trainer expired, Kendo returned to San Francisco to become a gun-smith again. He left the shop in Raccoon City in Robert’s capable hands of and opened up a San Francisco branch.

In December 1996, he was contacted by the Raccoon City Police Department, who requested the manufacture of custom weapons for the recently established S.T.A.R.S. team. Due to funds provided by Umbrella, Joe was able to use better and more expensive materials in order to make the weapons, which he named the Samurai Edge, modified Beretta 92Fs. After the weapons’ completion in June 1998, Joe left Raccoon City once again.

Some years later, Joe was tracked down by Leon Kennedy to his shop in San Francisco. The two had become acquainted after Leon had witnessed Robert’s death. At the time, Joe was working on a custom weapon similar to the Samurai Edge, but built from scratch. In autumn 2004, right before Leon departed for South Europe; he had requested a new weapon to rival the Samurai Edge. Soon after, Kendo presented Leon with a new handgun named the Silver Ghost, a hybrid matching close specifications of a Heckler &Koch USP, Smith &Wesson Sigma, and Ruger P85.

The Samurai Edge was Joseph Kendo’s legacy and variations of the gun were later developed by both the B.S.A.A. and the resurrected Blue Umbrella PMC. Jill Valentine had the Samurai Edge A1 model developed by technical officer Quint Cetcham and years later he also developed the Samurai Edge Barry Burton Model V.II which was perfected to draw out the maximum capabilities of Barry’s figure and physical strength. Both weapons retained the Kendo Custom emblem engraved on the slide’s right side as a certification and tribute. Using research left behind by Albert Wesker following his death, the rehabilitated Umbrella Co. developed the Albert-01 anti-bioweapon handgun using the Beretta 92F Custom Samurai Edge as a base. It was based on Wesker’s customised model he received during his time in S.T.A.R.S. and had worked closely alongside Joseph Kendo to develop. Umbrella Co. researchers developed a number of enhancements including the Albert.W System Unit. These weapons fired enhanced ammunition and were supplied for testing to anti-biohazard units such as the B.S.A.A. Kendo’s blueprints for this famous weapon combined with Albert Wesker’s seized research went along way for Umbrella Co. to be resurrected in the wake of major public scrutiny. In 2016 a special 20th Anniversary party was held to commemorate the Samurai Edge. A special colour variant was handed out to several individual parties. All modern Samurai Edge weapons retain the Kendo engraving as a mark of respect to its original creator.